Seminar to tell story of a militant woman in WWII

The Academy of Lifelong Learning will be hosting a seminar at 4 p.m. on Friday in the Coles County Airport’s Lockard Room. The seminar, titled “Mollie’s War”, will focus on a Women’s Army Corps member during World War II.

Mollie Weinstein Schaffer was one of the first women to be a member of the WAC, and presenting Schaffer’s life story is her daughter, Cyndee Schaffer, who will be drawing upon experts from letters Schaffer sent home during the war. 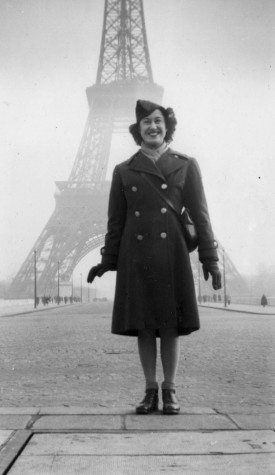 Bridget DeLaurentis, intern for the Academy of Lifelong Learning, said that Schaffer was one of the few women who were involved with WWII aside from being a nurse.

Cyndee Schaffer wrote the novel “The Letters of a World War II WAC in Europe: Mollie’s War” with her mother. The novel focused on what her mother and the other WACs went through in the war along with Cyndee Schaffer’s perspective of when she received the letters from her mother while she was at war. Mollie Schaffer died in 2011.

“I think it’s really cool that the two (Mollie and Cyndee) wrote the book together and that each of them put their own perspective in the book,” DeLaurentis said.

The seminar will touch on Schaffer’s basic training in Florida 1943 and being stationed in London, England with fellow WACs the day before and after D-Day and the German bomb attacks. Two months after D-Day, the women were transferred to Normandy, then Paris after its liberation with the Allies. After Paris the WACs went to Germany and witnessed the Holocaust before returning to the U.S. in 1945 with a dramatic view of the Statue of Libery.

“I do not think a lot of people are aware of women being involved in World War II other than bringing nurses,” DeLaurentis said. “I think it will be an eye-opening experience to hear about a first-hand experience from Cyndee and her letters along with when her mother when she came back.”

Students and faculty interested in attending the seminar can call the Academy of Lifelong Learning’s office or sign up by going to their office in Blair Hall Room 2201.