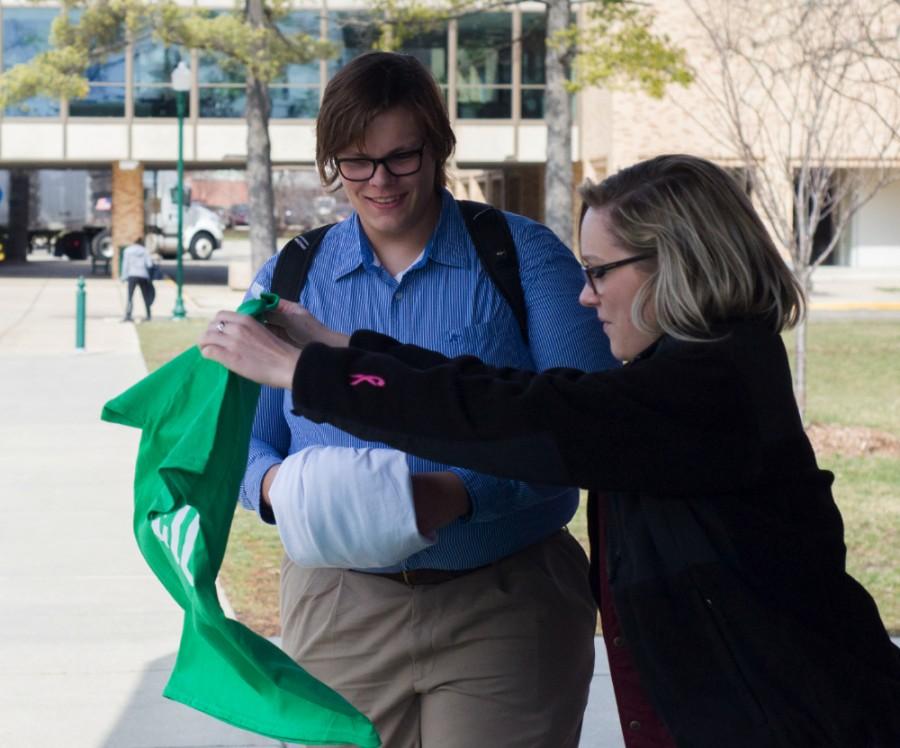 The National Residence Hall Honorary had tables set out in the Library Quad in front of the Doudna Fine Arts Center for their annual spring T-shirt sale. All of the money made from the sales will go toward housing and dining scholarships.

Dieter said that from the breast cancer awareness shirt sales, NRHH has made $4,000 to $5,000. She also said the NRHH donated $2,000 to research after the shirt sales were over.

The shirts say, “I shamrock EIU,” made by Dieter, and come in short sleeved for $10, baseball sleeve for $15 and both shirts can be purchased for $20.

“There are different scholarships where the people who receive the scholarship are nominated for it, and after a selection process that person is announced at the end of the year,” Rohmann said.

NRHH was established in 1965 with a goal to recognize students who have made an impact in residential life, which includes recognition through awards given by the Of the Month Committee and the Of the Year Committee.

The three NRHH and RHA scholarships funded by the T-shirt sales are announced at the Residence Hall Association end of the year banquet.

The Louis V. Hencken Housing Service Scholarship recognizes outstanding on-campus student leaders. Nominees must be fulltime Eastern students, be in their first year of graduate school, have an active role in the Residence Hall Association or individual housing units governing organization, and have a cumulative GPA of 2.75 or higher.

A minimum of three awards for the Hencken scholarship will be given out at the banquet.

The Sean R. McKinney Scholarship recognizes the contributions of a first year student to the on-campus students and housing programs. Nominees must be a student enrolled with two or less semesters at Eastern. This does not include the semester the student is nominated in. The student should be striven to improve the lives of student residents, unselfishly rendered his or her service to the housing program, have a cumulative GPA of 2.25 before nomination, and remain in a residence hall the following academic year.

The Richard G. Enochs Scholarship recognizes a leader in the on-campus community. Nominees for this scholarship must be a sophomore, junior, senior or graduate student with the intention of returning to Eastern in the fall after being selected, a student of outstanding personal character and scholastic achievement, and must reside in university housing at the time of nomination and the fall semester of the following year.

Any hall council or housing professional staff member can make nominations for the three scholarships.

The members of NRHH will be selling the shirts all week in the Library Quad as well the South Quad in front of Coleman Hall from 10 a.m. to 4 p.m.