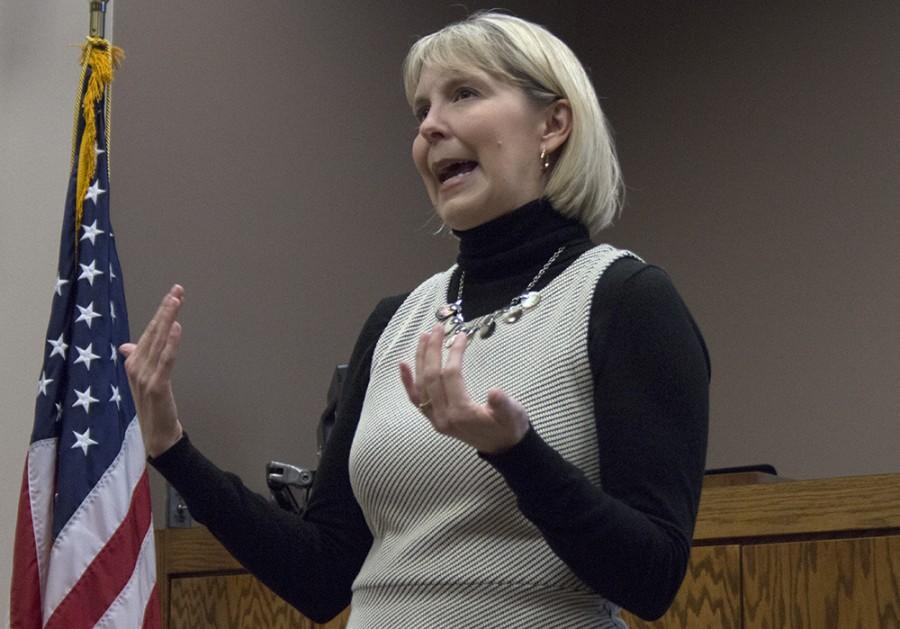 The keynote speaker’s interest in Clinton’s political stance started with a writing assignment for a rhetorical criticism class during her first year as a master student in 1994. For the assignment, Anderson had to choose a speech to analyze, and she chose Clinton’s speech to the American Medical Association about healthcare.

“People have asked me when I’m going to stop studying Hillary Clinton,” Anderson said. “And I always say when she stops doing things for the first time.”

T.M. Linda Scholz, a communication studies professor, who said she met Anderson in 1993 at Colorado State University where Anderson teaches, and said she was always impressed with the speaker’s political savvy, introduced Anderson.

The presentation began with Anderson discussing Clinton running in the primaries in 2008 against President Barack Obama, and a Saturday Night Live skit with Tina Fey and Amy Poehler, where the two comedians advocated for Clinton.

In response to Fey and Poehler, SNL’s Tracy Jordan responded with his own skit that said, “Bitch may be the new black, but black is the new president, bitch.”

After showing the clip, Anderson went into what it has been like for Clinton in the campaign as a woman and the archetypes that emerged with Clinton’s announcement of her presidential campaign presented in 2008 on YouTube.

Anderson said that as a woman candidate, Clinton would need to have more political experience and more money than her opposing candidates. Something that has also changed from Clinton’s campaign in 2008 to now is that she is now going as a feminist.

“I hope the audience understands that mediated framing of candidates is oversimplified and often stereotypical and doesn’t necessarily reflect candidate’s actual policy positions or stances,” Anderson said. “No matter what candidate students support, I really hope they were inspired to engage in the process rather than disengage because that’s what will keep our democracy healthy.”

Once the presentation ended, Anderson was open to answering any questions the audience had. This brought up issues such as the validity of Clinton’s policies and stances on controversial topics including gay marriage, and what Clinton planned to do for people of color and their communities.

Terri Coleman, an English alum student who graduated in May, asked Anderson about how Clinton would help communities for colored people.

“I really don’t think either Bernie Sanders or Hilary Clinton really talk about specific issues my community, specifically the black community,” Coleman said. “But I really appreciated the way Anderson talked about togetherness and intersectionality and contextualized the two with actual platforms in Clinton’s ads.”

Coleman said she had been ambivalent about the 2016 campaign before the presentation and it would have her thinking more about whom she supports.