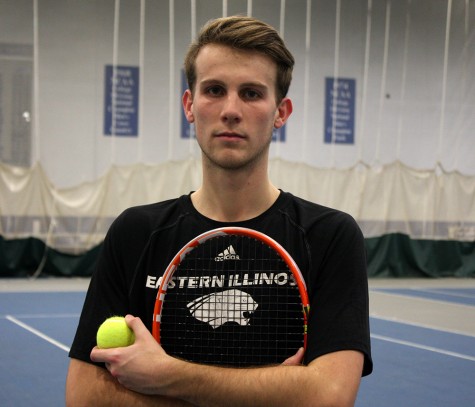 Sean HastingsSenior tennis player Ryan Henderson has seen progress on the court since he has arrived at Eastern from New Zealand his freshman year.

Coming from the southern hemisphere to the northern in his freshman year, Henderson had to adjust to some changes.

When he first came to the States, he really did not know anything about them. He just chose to come to Eastern Illinois.

“It was just really luck,” Henderson said. “I just guessed. I could only really name California, Florida, and New York and that was it. I got offered the chance to come here and I just took it.”

He just graduated high school in December and came to Eastern in January.

He took a big risk coming straight here to miss his summer with his friends and family. But he does not regret it.

He said he misses all the things that he does not have here.

“I miss my family; I miss my sister and friends as well,” he said. “I miss the food, where I live, the small things, they all add up.”

From his freshman year until now, he has seen his game grown.

“I’ve got a lot of more self-belief now and my forehand has improved a lot,” Henderson said.

As he has aged and been through seasons, he has seen the improvement from growing up and becoming more mentally stronger, he said.

“A lot comes with experience. I got a lot more experience, and just physically growing up, becoming more of a man helped as well,” said Henderson.

His teammate, senior Robert Skolik, who has played with him all four years, said his first impression of Ryan was a jokester.

“The first thing I saw was he came in and was in like ‘kiwi-land’ and patted the coach on the head and was playing around and we had a really scary coach at the time and everyone was like ‘what the hell are you doing?’” Skolik said. “It was just a bad first impression, he’s a really cool guy.”

Skolik also has seen how much Henderson has grown as a tennis player.

“It wasn’t until his sophomore year when I saw how good he was,” Skolik said. “Every match he was one of the most reliable players and has been ever since.”

In his first season as coach, Sam Kercheval has seen that he is a great tennis player.

“You see that with the way he performs on the court,” Kercheval said.

Kercheval said he is taken most by the knowledge Henderson has about tennis.

“His tennis mind is incredible,” Kercheval said. “You’d hope that all your athletes have that ability to think very clear about the game and love the game that way but when you talk to him, you realize that he’s got it on both ends.”

Kercheval said he has seen improvement from Henderson since the fall and considers him a leader on the team.

Henderson said Kercheval is a good coach and has brought in new and different drills and motivates them to work harder.

This season, his current record is at 5-3. He won OVC co-player of the week earlier this year.

“I’ve never had anything like that before so I’m pretty proud of that,” Henderson said.

The team record sits at 2-6, but Henderson thinks the team is in good shape and can make conference this year.

“Rob (Skolik) and Rui (Silva) have been playing really well,” Henderson said. “Ognjen (Jevtic), the new freshman and I’m playing doubles with him which has been a good experience so far. Then we have Grant and Trent (Reiman) grinding away and J-Woody (Jared Woodson) trying to push in the lineup.”

Being a student athlete, Henderson said scheduling is the hardest part.

“You don’t get to have a regular schedule like other students,” Henderson said. “A lot is expected from you: practice, working, doing homework in the late or early hours.”

Eastern has affected him and changed him as a person.

“I’ve changed so much as a person coming here,” he said. “When I came in I was super naive and young; now I’ve grown up a lot. I think I’m ready to get out into the real world now.”

Henderson is an accounting major and he said he has a job lined up after he graduates back home in New Zealand.