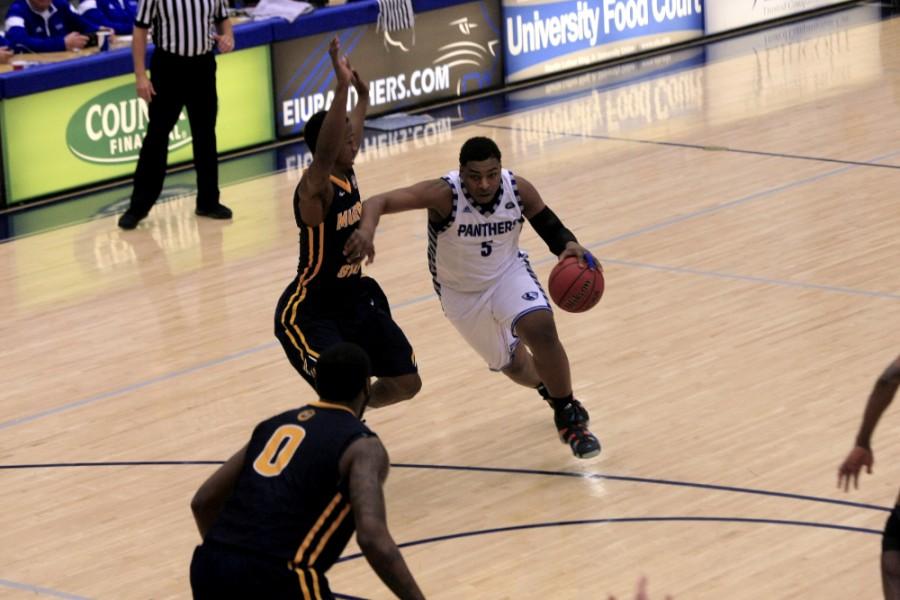 Junior guard A.J. Riley looks to pass the ball to a teammate during the game against Murray State Thursday in Lantz Arena.

The men’s basketball Ohio Valley Conference Tournament is set to get underway after a season filled with chaos.

The tournament tips-off Wednesday in Nashville, Tennessee, where an automatic NCAA Tournament Bid will be awarded to the last team standing.

Only the top eight teams in the conference qualify for the tournament, and the Panthers will go in as the 7th seed.

Eastern will begin action Wednesday night in a rematch against conference foe Murray State at 8:30 p.m.

The Racers come into play as the 6th seed in the tournament, after finishing the season at 10-6 in OVC play.

As for other teams in the tournament, Belmont comes in as the favorite after earning the top seed.

Belmont earned that number one seed after going 12-4 in the OVC, winning the OVC East, and finishing atop the whole conference.

Belmont has finished as regular season champions in three of its last four seasons since joining the OVC in 2012.

The top two seeds in the conference earn a double-bye to begin the tournament, and automatically advance to the semi-final round.

The other division winner is Tennessee Martin, who was crowned champion of the OVC West.

UT-Martin is the 2nd overall seed in the tournament, after finishing 10-6 in conference play.

The Skyhawks will be the other team with a double-bye in the tournament, and will need just one win to advance to the championship.

The rest of the OVC held a tight race all season long, and tiebreakers were needed to decide some seeds.

#3 Morehead State and #4 Tennessee State finished the season at 11-5, and earned a first-round bye in the tournament.

Tennessee State made a staggering improvement this season, as the team won just five games a year ago.

Tennessee Tech also finished at 11-5, but earned the 5th seed after losing the tiebreaker to those two teams.

Tennessee Tech will take on 8th seed Austin Peay in the opening game of the tournament at 6:00 p.m.

The winner of that game will advance to the next round, and go up against Tennessee State.

Austin Peay snuck into the tournament as the 8th seed, finishing one game ahead of Eastern Kentucky at 7-9.

It is also Austin Peay’s first OVC tournament berth since 2012.

Morehead State enjoys its first-round bye as the team awaits the winner of Eastern vs. Murray State game.

The first round of the tournament takes place Wednesday, while the Quarterfinals are played Thursday.

The Semi-Finals will be in action on Friday, and the conference championship will begin Saturday at 5:00 p.m.