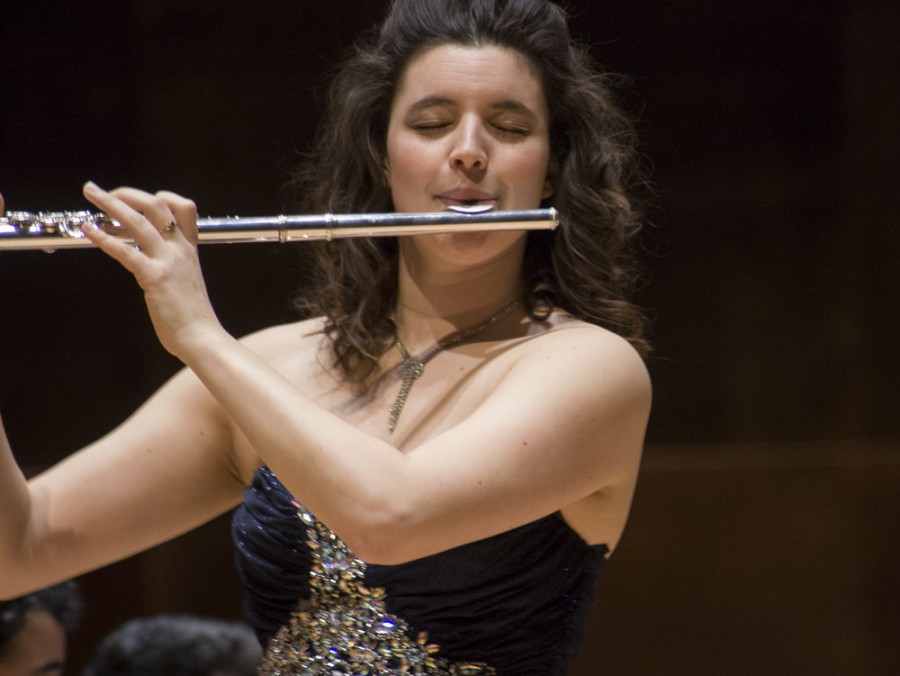 The Eastern Symphony Orchestra performed over five different music pieces in Dvorak Hall in the Doudna Fine Arts Center. The program, “Stagestruck,” was a musical experience of percussion, flute, a marimba and xylophone, and included a feature flute performance.

The program began with the lively piece, “Light Cavalry Overture” by Franz Suppé

Richard Rossi, the director of orchestral and choral activities, and Cameron Craig and Rebecca Carmack, both graduate conductors, conducted the show.

Featuring in this song was flutist Jennifer Antkowiak, a graduate student of the arts in flute performances.

Antkowiak played many intricate solos on her flute to incorporate the mood of the mystical song with the rest of the orchestra.

She moved the audience, and after the song was over, many stood up to applaud the performance.

A lot of work was put into Antkowiak’s piece, and she said that she prepared it over the summer and had been practicing since.

“My favorite part is getting to share my love of music,” Antkowiak said. “The piece was romantic and let me show off who I am as a musician and performer.”

The show transitioned into “Hungarian Dances” by Johannes Brahms, a piece with 6 different components, the third one featuring Cameron Craig, graduate conductor and geography professor, and concertmaster Kristin Stine

The fifth part of the song featured James Calderon, concertmaster. The other portions of the piece were conducted by Rossi.

Craig said his favorite part of the performance was being with the orchestra and making music with them. He said that he studied the score for hours to prepare for Sunday night’s performance.

“The last performance I did was Tchaikovsky’s “Dance of the Sugarplum Fairy, so this performance was not a holiday piece,” Craig said. “It had me exploring Brahms’ works, which was very exciting for me. I love Brahms.”

Craig started out at Eastern as a music major 25 years ago but switched to a history and geography major.

“I have my masters in geography and so now I’m back to finishing up the music aspect of my career,” Craig said. “Music is a big passion of mine. I love, love music.”

To end the performance the stage was set with drums, the marimba, and a xylophone to play with the orchestra.

Jamie Ryan, percussionist and member of the Wisconsin Chamber Orchestra and the Galaxy Percussion Group, played the marimba and the xylophone for the last two songs: “Sugaria, Concerto for Marimba and String Orchestra” by Eric Sammut and “”Sabre Dance” from Three Dances from the Gayne Ballet” by Aram Khachaturian.

Ryan’s use of the marimba and xylophone was lively and fit with the sound of the symphony orchestra.

The last two songs were very different than the pieces performed before intermission, and showcased the different works the orchestra could perform.