Residents surround the castle with love 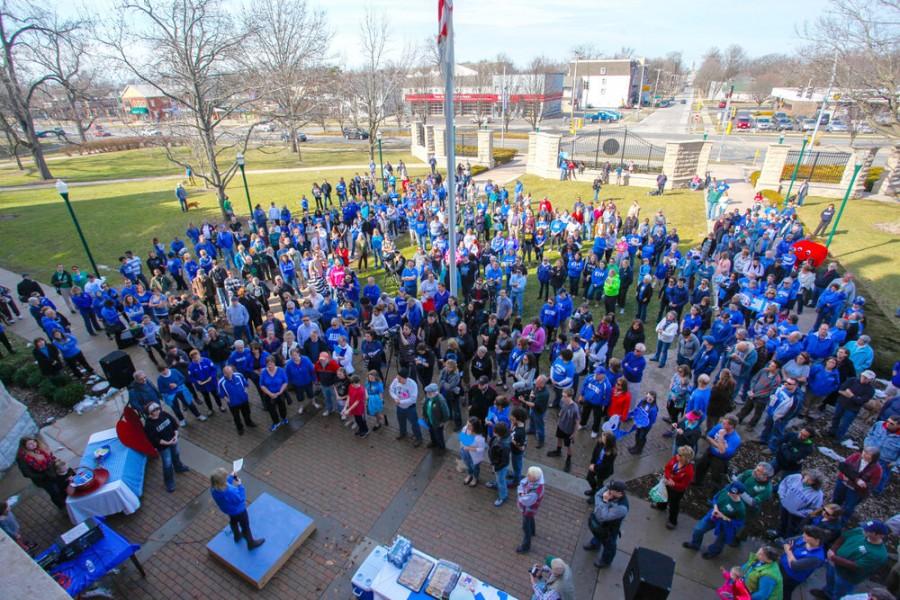 People stand on Old Main’s lawn during the “Surround the Castlel” gathering Sunday.

The love for Eastern united students, employees and community members Sunday afternoon and brought them to the doors of Old Main to share their support in the midst of an eight-month budget battle.

Eastern and Charleston community members surrounded the castle to show their support for the university and shine some light on a dim crisis that has left public universities in the dark while they continue to trudge along without a state appropriation.

Jana Johnson, the development officer for WEIU-TV, said Eastern is going through a rough time, but the university would get through it as a family.

“You love this community, and you love Eastern,” Johnson said. “What would have happened 100 years ago, when (Old Main) was being built, what if it hadn’t been built here? What would Charleston be?”

The idea to surround the castle came to Johnson when she and some of her friends grew fearful after hearing several rumors that Eastern was going to close down.

Johnson wrote about this on social media saying everyone was going to get through this together.

After writing the post, Johnson said she received a text from Mayor Brandon Combs saying he wished they could do more to help Eastern and the community work together.

Johnson said that is when she hatched the idea.

Combs spoke at the gathering and said seeing all the people present showed how much Eastern means to the community.

“It is tough, but it’s times like this when we need to stand together as a community just as Dr. Glassman and I have,” Combs said. “(We have to) try to take this negative time and turn it into something positive.”

Combs said the day was all about love.

Once the speeches ended, a wall of people surrounded the whole castle and took pictures and videos while love- and friendship-inspired music played.

Those who attended the demonstration were encouraged to share their pictures on social media in to spread the love and were treated to snacks and drinks donated by local businesses.

President David Glassman said the number of people who showed up and surrounded the castle was incredible, and it was a positive and uplifting day for everyone.

Glassman said “Surround the Castle” was not a political rally or an event — it was a celebration intended to show love for the university.

“This has nothing to do with politics today,” Glassman said. “It’s just a celebration of Eastern and what it means for the community and for all of us.”

Glassman said he believes the many voices of the university are being heard in Springfield.

“There’s a lot of discussion and different proposals that have taken place recently and it demonstrates that higher education is a top priority for our lawmakers and they do see the urgency and know they have to come to a resolution,” Glassman said. “We look forward to that resolution and getting back to normal.”

Glassman said nothing is more important than solidarity and the promise of hope and prosperity for the future.

“We will be standing here for generations to come to celebrate what EIU means to us,” Glassman said. “I hope that we can do this almost on an annual basis even without challenges going on just to appreciate this university.”

Carolyn Adkins, a Charleston resident for 30 years, said she loves how Eastern, including the castle of Old Main, inspires instructors and community support.

“The knowledge, the ideas,” Adkins said. “All the stuff that was made available to us as students, leading to a job, a degree, a brighter future.”

Adkins said the university has some serious challenges, but they can be faced.

Combs said he felt blessed and happy to see the community support Eastern has.

“We have been trying to be the light,” Combs said. “We want to show people if you keep your heads up, we can do it together.”

Combs said historically, hardship has been able to bring people together, and he wants to keep up an open dialogue between the university and community.