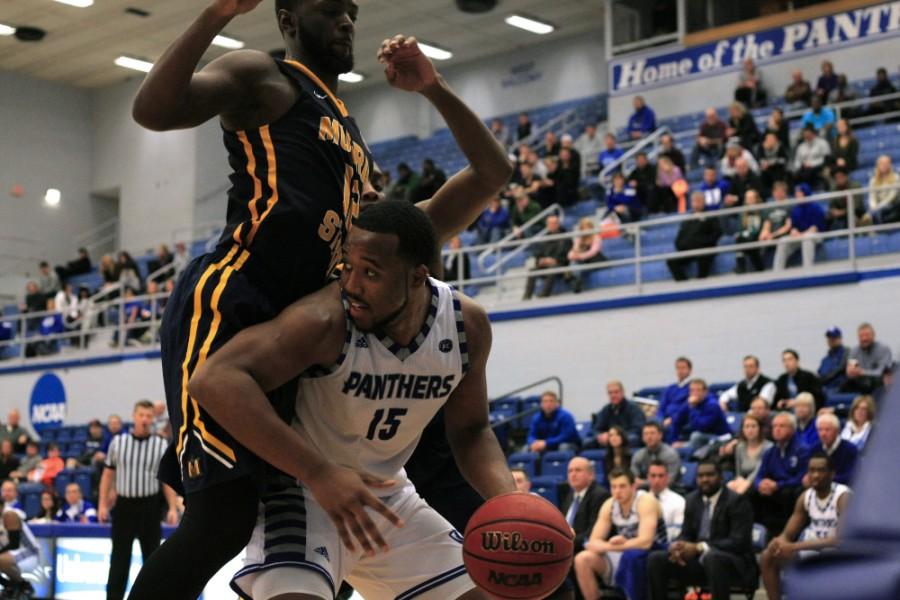 Senior wing Trae Anderson looks around a Murray State player to try and pass the ball. Anderson led the team with 22 points in the Panther’s 85-74 win Wednesday in Murray State.

The Eastern men’s basketball team wrapped up the regular season against Murray State, and did it in convincing fashion on Senior Night.

From the opening tip, there was a special atmosphere in the building Thursday night.

The Panthers honored four seniors before the game, and played in front of their home crowd for the last time this season.

With the crowd roaring behind them all night long, and special performances from many players, Eastern came away with an 85-74 victory to end the regular season.

“We have a ton of respect for Murray State, because beating them just doesn’t happen much,” Eastern coach Jay Spoonhour said.

After losing three of their last four games, the Panthers seemed to have a chip on their shoulder against the Racers.

Both teams got off to a quick start, trading leads in the first 10 minutes, and switching momentum.

But one of the most important stretches of the game, was when the Panthers went on a 21-9 run in the first half to push the lead to 32-23.

Eastern never gave up the lead after that run, and it was clear they wanted to finish things from there.

In the final four minutes of the first half, the Panthers made big stops by forcing turnovers and blocking shots to lead to points on the other end.

And it was a man off the bench who sparked even more energy into the team.

Freshman Aboubacar Diallo checked into the game for Eastern and got three crucial blocks, as well as a buzzer beating layup to end the first half, sending Panther fans into a roaring cheer.

It was a solid first half all around for the Panthers, as they went into halftime leading 44-32.

An important key to Eastern’s halftime lead was defense.

The Racers had just one guy scoring in double-digits at halftime, as Demarcus Croaker had 21 points.

“We were smart defensively tonight, and that was the difference,” Spoonhour said.

Both players finished the first half with 11 points to lead the team at that point.

On a night where he was honored in his last home game ever as a Panther, Anderson had a career performance.

A strong second half allowed Anderson to finish the game with a team-high 22 points.

“It was a special one, and I just played my heart out,” Anderson said. “It makes it even more special because we have never beat Murray State since I got here.”

McReynolds continued his successful season by finishing with 16 points for Eastern.

The Panthers opened the 2nd half with more of the same momentum, and maintained their lead.

Sophomore Cornell Johnston proved to be a leader for Eastern once again, as he had 11 points and nine assists.

The Panthers ran into a problem with nine minutes left in the game, as Johnston got into foul trouble.

But it was the Racers who really struggled with foul trouble.

Two of Murray State’s starters and leading scorers this season fouled out in the second half.

Freshman Patrick Muldoon also proved to be a factor for the Panthers off the bench, finishing with 13 points in the game.

Although the Panthers already clinched a berth in the Ohio Valley Conference tournament, this still serves as a big win for the team to end the regular season.

With the win, Eastern improved to 9-7 in conference play, and are just a half-game behind Murray State for 2nd place in the OVC west.

“It is always a big deal to beat Murray, because it just does not happen much,” Spoonhour said. “It is a testament to this team, and our seniors this year.”

Right now the Panthers would be placed as the 7th seed in the conference tournament, but can move up with help from UT-Martin.

Murray State goes onto play UT-Martin after this for the last game of the season, and a loss could mean plenty for the Panthers.

If the Racers lose that game, Eastern would be tied with them and it would come down to a tiebreaker to see who gets the 6th seed in the OVC tournament.

“I am really happy with where we are right now, and I am glad that we finished at 9-7 in this conference,” Spoonhour said.