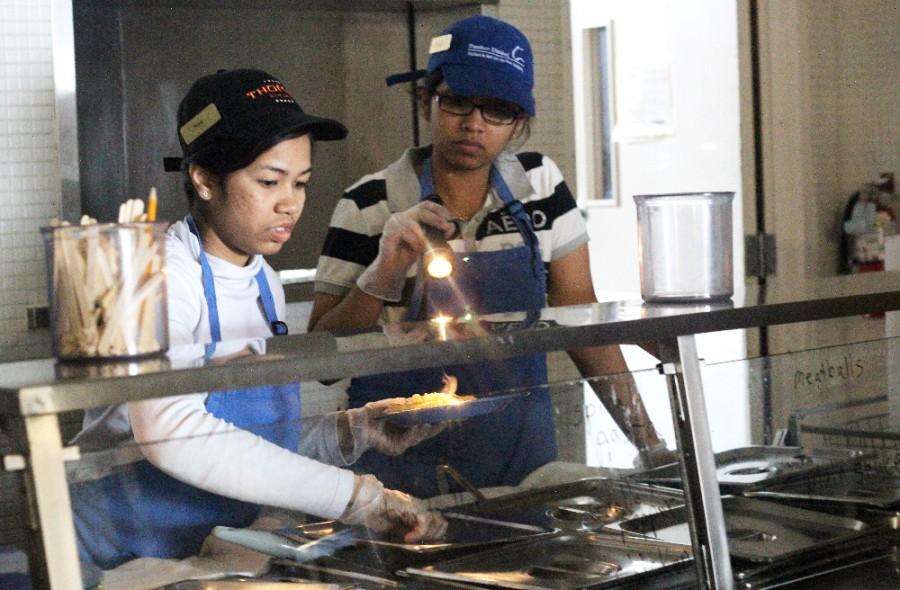 Even though classes were canceled on Monday, people were still out and about campus, working, studying and relaxing.

Tony Craig, a building service worker at Booth Library and the Triads, had been shoveling the entryway around the library one and off since around 8 a.m.

He said he did not know if they could prepare for snow days, but they prepare for the winter weather by getting chemicals like Ice Melt ready.

“Ice Melt and shovels, that’s what we use,” Craig said.

Craig said snow removal takes priority over cleaning but he still has to have all of his cleaning done.

He said there are times when they have to come in and start shoveling right away, which can make his job harder but today was different since when Craig came in at 4 a.m. it was raining.

The best way to stay warm while shoveling, Craig said, is by wearing layers, but he also has to dress for inside buildings since that’s where a lot of their work is.

“I don’t mind shoveling snow,” Craig said. “It’s just part of the job. It’s what we get paid for.”

Dan Icenogle, a shuttle bus driver, said he had to be extra cautious and more watchful for other cars because of the snow.

Driving the bus since 2008, he can only remember two different times the buses stopped running as a result of inclement weather.

He said even though classes were canceled, people “still like to go to places,” though they have to be mindful of safety.

The shuttle bus stopped running at 3 p.m. Icenogle said his last stop was at 2:47 p.m.

For some, the snow and resulting power outages made it harder to do their job. In Thomas Dining Hall, the cash register students use to swipe their Panthercard lost power, so the student working the register had to write their names and E-numbers by hand in a notebook.

The pizza oven also stopped working for a while and the lights overhead went out so Niharika Mandhada, a graduate student studying technology, had to use flashlights.

Mandhada, who is from India, said she has not seen snow like the kind in Charleston, but thinks it, is fun.

Marvin Collins, president of Kappa Alpha Psi, was inside the library taking care of business for his fraternity and handling taxes.

Collins also had to be AT&T at 1 p.m. where he works as a sales agent.

“I gotta get stuff done,” Collins said. “I already had it set on my calendar to do on this day in particular.”

He said the cancellation of class made all this easier as he did not have to cram it all in.

Being from Chicago, Collins is used to the snowy weather, but said if he had to choose he would choose sunny days over cold ones.

“Who wants to deal with snow?” Collins asked. “The only thing I care about with snow is (having a) white Christmas.”

Lois Dickenson, a Charleston resident, came to the library to research despite the snow because she works better without distractions.

Loreal Rogers, a junior sociology major, was working on an assignment that was due at 2 p.m.

“I just wanted to get it out of the way,” Rogers said. “Otherwise I wouldn’t be here.”

She said if she was not at the library, she would be sleeping.
Originally, she was supposed to work in the Martin Luther King Jr. University Union, but they called Rogers and let her know she would not have to come in because they were not expecting many people.

She said she woke up in the morning to check if classes were canceled, “for the heck of it,” even though none of her friends thought they would be.

Danaher said she did not mind working still.

Although Danaher said business can be slow during the weekends in the Union, it was not usual for it to be as slow as it was on Wednesday.

Java Beanery and Bakery was also having a slow-ish business day, with customers coming about every 20 minutes.

Michael Reilly, a senior health administration major, said they usually had people coming in nonstop from 8 a.m. to 11 a.m.

Avinash Chilaka, a graduate student studying technology, said they would usually have a line by that time.

Chilaka said he would just go home and do his homework with his newfound free time.

Conor Baltz, a freshman biology major and Ava Gillespie, a freshman history major, took advantage of their time off by playing pingpong in Thomas Hall.

Gillespie said she was “super excited” for the day off of classes because she was up late the night before.