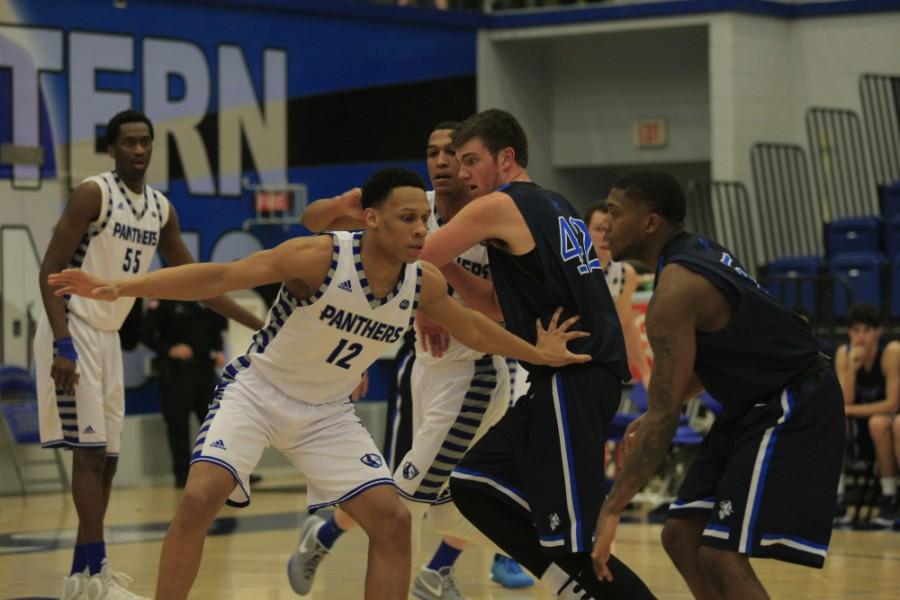 The Eastern men’s basketball team closes out its regular season Thursday night, and it may be the most important game of the year.

The Panthers welcome Murray State into Lantz Arena in their final game before the Ohio Valley Conference Tournament.

Not only will the Panthers be wrapping up their regular season, but there will also be a special atmosphere in the arena for Senior Night. Eastern will honor four seniors before the game. Luke Norman, Joe Kuligoski, Luke Piotrowski, and the team’s leading scorer Trae Anderson will all be graduating this semester.

As the team honors their seniors, they will also have their focus on many other things in the game. While both of these teams have a tournament berth locked up, this game still has many postseason implications.

Eastern comes into the game at 8-7 in OVC play this season, which is good for 3rd place in the OVC West. The Panthers sit a game and a half behind division leaders Murray State and Tennessee-Martin, who are tied at 9-5 in conference play.

With this being the last game of the regular season for EIU, there is no possible way for the team to finish the season atop the West division. Along with a win against Murray State, the Panthers will need other things to fall their way in hopes of moving to 2nd in the West, and earning a higher seed.

After this game, the Racers have a matchup set with Tennessee-Martin for both teams’ final game of the season, and the winner of that may be crowned as winner of the division.

While those teams continue to fight for seeding with the conference tournament inching closer, Eastern is looking for a win to end the regular season. That win is not going to come easy though, as Murray State offers a great challenge for the Panthers.

Last time these two teams faced off in Murray, Ky., the Panthers struggled for most of the game in a 68-58 loss.

While the Panthers have lost three of their last four games, it can be said that this team found the chemistry they needed to win important games.

After that loss to Murray State, Eastern started clicking on all cylinders en route to a five game winning streak.

After hitting a bump in the road and losing three straight games, the Panthers answered in their last game with a 61-58 victory. That win did not come easy for the Panthers, but the team led by 16 points in the game when the offense was clicking.

Now in their final game, Eastern is looking to avenge its loss earlier in the season to Murray State and to make a statement ahead of the OVC tournament.

In that effort, the Panthers will lean on the team’s leaders for an answer on offense against a strong Racer defense. Murray State’s defense is ranked second in the OVC, as the Racers are allowing just 67 points per game.

Eastern’s answer to that defense will be leading scorer Trae Anderson, a senior. Anderson is one of many key parts in the offense with an average of about 15 points per game.

Three other guys are averaging double-digit scoring on the team, such as junior Demetrius McReynolds, sophomore Cornell Johnston, and junior A.J. Riley. The Panthers have also celebrated a special season for freshman Casey Teson, who is just six completed three pointers away from the school record.

McReynolds and Teson have stepped up their play of late and were honored for the special performances.

McReynolds is averaging 14 points per game in conference play, and his most recent performance against Southeast Missouri was just another strong game for the junior transfer.

McReynolds finished the game with 19 points and 12 rebounds against the Redhawks, and was named OVC Newcomer of the Week for his performance.

It was the sixth time this season that he finished with 19 or more points.

Teson has improved lately by averaging 15 points per game in the last week, as well as making 8 of his 16 three point attempts.

While the Panthers offense has succeeded of late, it is their defense that has been problematic.

Eastern has allowed 70 or more points in its last four games, while losing three of those points in the final two minutes of each game.

The Panthers’ answer on defense starts with defending Murray State’s top three scorers. Bryce Jones, Wayne Langston, and Jeffery Moss are all averaging more than 10 points per game for the Racers.

With the season coming to a close, this is the final chance for the Panthers to try and finish with a statement win.

Action tips-off at 8:30 p.m. in Lantz Arena, and the game will be broadcasted on CBS Sports Network.