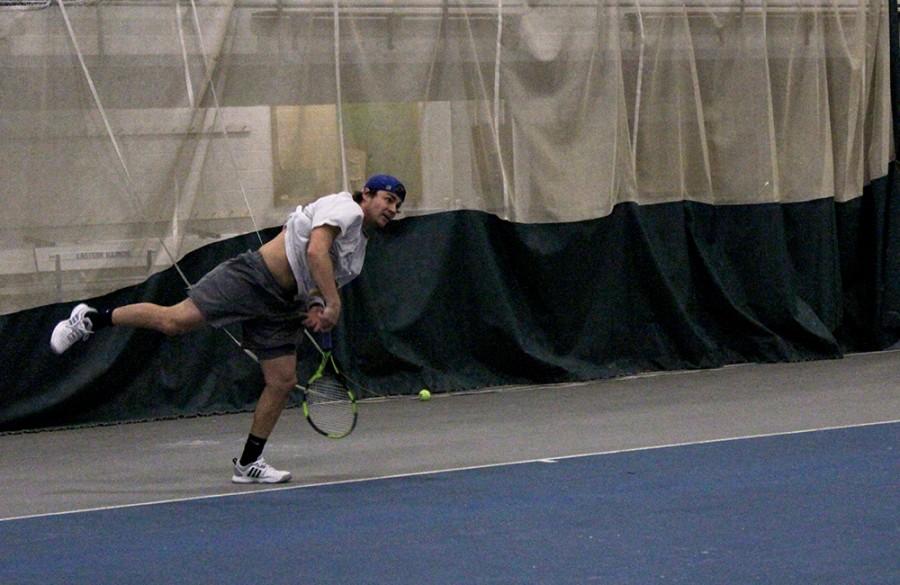 Red-shirt senior Jacob Wendell serves during a practice game in Lantz Fieldhouse on Tuesday. The Panthers are 2-6 overall.

The Eastern men’s tennis teams record currently sits at 2-6. The Panthers have lost three straight matches, and in those three matches have only earned one point, which was against the University of Illinois-Chicago.

Despite the Panthers’ record, the team still feels positive from the season so far.

“Things are pretty much what I expected in terms of results and growth,” coach Sam Kercheval said.

For the week of Feb. 9, senior Ryan Henderson won Ohio Valley Conference Co-Player of the Week, which he shares with Tennessee State’s Shashank Nautiyal.

Kercheval said he is happy with what he has seen from the team this season and said that the most important thing is to keep the right mindset leading up to conference play.

“I expected we would make big strides quickly, as we got matches and that has definitely been the case,” Kercheval said. “We have played a number of strong teams so nothing will surprise us when we get to conference play.”

The Panthers’ first OVC match will be home at the Darling Courts against Southern Illinois University-Edwardsville on March 20. The Panthers are using these early season games to get experience and work towards their goal of the OVC championship. The Panthers are off this week, but will take on a non-conference opponent of Marquette on Saturday, March 5 and then a week later will take on Depaul.

“All these matches are for experience, learning how to win the big points,” Skolik said. “You try to imagine yourself in the conference match, but you know it’s still four weeks away and you still have time to work on what you need to work on.”

SIUE’s record stands at 3-6. Its most recent win came against Western Illinois 7-0 on Saturday. On that same day the Cougars lost to Northern Illinois 7-0. Matthew Hutchinson was nominated for OVC Player of the Week this week, but Eastern Kentucky’s Guillem Sanchis won. The Cougars swept all six of their singles matches and also swept the three doubles matches. Against NIU, the Cougars were swept in all of their matches.

After the Panthers face SIUE, their next two conference matches will be away. They will take on Murray State March 25th. Murray State is currently 1-5 for the year. Their only win came against Olivet Nazarene University, 4-3.

The Racers will have five matches before they face the Panthers, taking on Vanderbilt, Louisville, Lipscomb. Then they begin OVC play against Morehead State, then Eastern Kentucky.

The Racers will take on Vanderbilt this weekend. The Racers’ last match was on Saturday against South Dakota State where they lost 2-5. At the No.1 spot, sophomore Will True defeated SDSU’s Lovro Curcija 4-6, 7-5, 11-9. Sophomore Marcel Ueltzhoeffer won against Henrique Pereira 7-6, 6-4. These were the only two points they won from this match, but they did win one of three doubles matches.

The Panthers will take on Austin Peay the next day after Murray State. Austin Peay is 0-3 on the year. All three of their matches have been close, losing 3-4 to Chattanooga, 2-5 to Lipscomb and 3-6 Southern Indiana.

The Governors’ next match will be against Southern Illinois-Carbondale on the 26th. Junior Manuel Montenegro defeated Samuel Kiladejo 6-1, 6-1. Freshman Almantas Ozelis won against Illia Karelin 6-1, 6-4. Those two also won their doubles match 9-8. That was the only doubles win for APSU.

The Panthers begin OVC play on March 20th and will finish out the season with all OVC opponents until the OVC tournament on April 21.