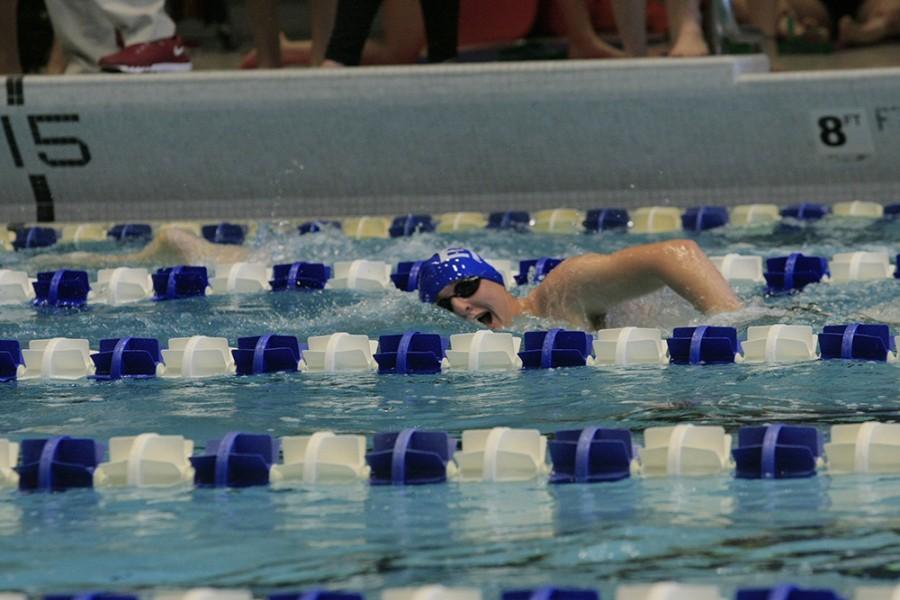 The Eastern men and women swimmers combined for 29 top-15 finishes, including five new school records for EIU in the final two days of the Summit League Championships.

The Panthers combined to set six school records over the weekend.

“Setting six school records over the course of the weekend was extremely exciting,” coach Jacqueline Michalski said. “I was proud not only of those student athletes but of all of the swimmers who improved their times over the weekend.”

The men and women both finished in sixth place.

Sophomore Brandon Robbins’ time of 56.82 in the 100-yard breaststroke prelims Friday night, earned him a new program record for Eastern. Robbins took eighth in the event with a time of 56.96. Fellow sophomore Matt Jacobs finished just under a second after Robbins in the prelims with a time of 57.24, which was good enough for fourth in Eastern history.

Robbins will also have his name on the records board at Padovan Pool as he broke the 200-breaststroke record as well. He turned in a time of 2:04.57.

“It was really exciting,” Robbins said. “I wasn’t expecting to break the 100 record. I was pretty far off it last year at conference, so to do that this year gave me a confidence boost going into the 200 on Saturday.”

Robbins said he felt relief after he broke the 200-yard record. He was close last year and it was a goal to break it this year.

Sophomore Stephen Truchon also cracked the Eastern top 10 for the 100-yard butterfly with a time of 51.35. Truchon finished in 13th place in the event.

Oostman’s goggles were blurry when she finished the race and could not see the clock for her time.

“I had to look over at my teammates to see if I got it or not,” Oostman said. “When they all started cheering I knew I got it, and I just felt such a relief because that moment was what I have been working for this entire season. It was a great feeling knowing all that hard work paid off.”

She moved into third all-time in the 100-yard backstroke with a time of 57.61, just under a second slower than the current Eastern record.

Sophomore Dani DiMatteo holds the fourth fastest time in Eastern history with her time of 58.25 in the 100-yard butterfly.

He said that he knew he broke the record before he even saw his time because the whole team was at the edge of the pool “going crazy.”

“It was phenomenal (to break the record), definitely the most rewarding part of my swimming career so far,” O’Doherty said. “I have had my eyes on that record since I first came to Eastern almost three years ago now.”

O’Doherty almost set the record his freshman year but missed it by about half of a second.

Sophomore Steve Fishman is the team’s other 200-yard backstroke swimmer, and he pushed O’Doherty all year in practice and meets. O’Doherty said he doesn’t think he could have gotten the record without racing him all the time.

Senior Kelsey Ferguson also cracked the top 10 in her final conference meet of her career. Ferguson moved to third all-time in the 200-yard breaststroke with a time of 2:24.46. Ferguson also holds the third fastest time in Eastern history for the 100-yard backstroke. Senior Joann Wakefield is in fourth for Eastern all-time.

Junior Paige Eavenson moved to fifth all-time in the 200-yard butterfly with a time of 2:11.40.

The Panthers’ season is over. Eastern saw growth on both the men and women’s side with each seeing many time drops throughout the season.