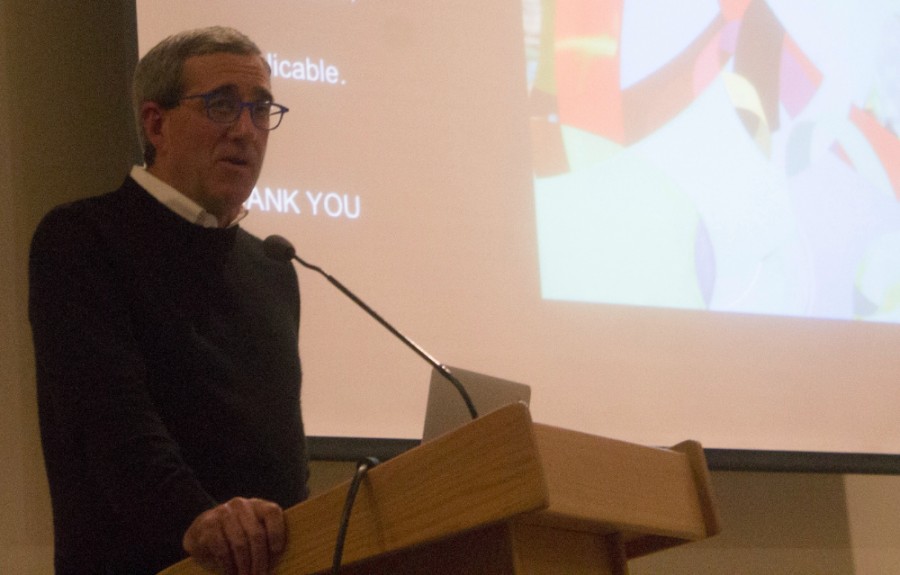 Cincinnati artist Kim Krause speaks at an artist’s lecture in the Tarble Arts Center on Friday.

Artist’s lecture on Eastern’s campus encouraged art students, explained the impact of residencies, influences of artwork and things learned throughout a lifetime.

Michael Schuetz, the assistant director of the Tarble Arts Center, explained the process in which Cincinnati artist Kim Krause came to Eastern and gave the artists lecture on Thursday in the Tarble Arts Atrium.

There are seven paintings on loan from the artist at the Tarble Arts Center in the Brainard Gallery. The paintings are part of a series titled “The Nature of Things.” They are on display from Jan. 9 to March 20.

Krause’s exhibition came about through the art department at Eastern. The faculty nominates an artist for the show and then they send a proposal to the Tarble Arts Center where they decide who is best based on the proposals.

Krause talked about multiple components about his life and his artwork during the lecture. He named his lecture “Particular, Unrepeatable, Inexplicable.”

Krause started off his lecture by showing his early work when he was in graduate school.

He went through multiple slide show pictures to visually show his artwork to the audience.

The main points Krause was discussing were the different residencies that he went to throughout the country and how they influenced the way his art was made. He said that each residency impacted him in a different way.

His first one was in Munich where he got away from straight lines in his paintings. When he went to Greece, it was the first time he incorporated his personal experiences into his work.

In 2004, during one of his residences he incorporated spirals in his work and for the first time had drips of paint doing down the painting.

Krause explained more residences he stayed at to give the students in the lecture a real grasp about the real world as he called it.

He encouraged every student to at least apply for a residency after college. He said the greatest thing about residencies were the people he met when he was there.

When asked by an audience member how he treats a piece of work that he thinks is his best one yet but nobody agrees, Krause responded they need to play nice.

“I don’t want to be in love with my work. But if you’ve done something and you’re really proud of it, it’s taught you something and that’s why you’re proud,” Krause said. “Pride is not a good thing to have. What you do is start your next painting.”

Krause mentioned many people and published works that influenced him and his artwork.

The woman who influenced him the most was poet Ann Lauterbach. She taught him what the creative process for an artist is like and helped him make sense of it.

These authors and artists taught him how to put things into perspective, to calm down and loosen up when needed and to just go with his gut even if other people did not like it.

Krause ended his lecture with 10 lessons he has learned throughout his life of being an artist.

Some of these lessons include “It’s not important to know what a work of art means but it’s vital to know it has a meaning.”; “Your intuition already knows what you want, you just need to listen to it.”; “Art cannot be thought up, it’s a combination of thinking and doing, you simply have to trust the process.”

Schuetz said that the exhibition that is going to be in the gallery at the end of March is the enrichment exhibition, which is geared toward middle and high school students.

The shows are normally student education oriented. The last show of the year will be the work of all the graduate students.

Sara Jaraczewski can be reached at 581-2812 or [email protected]