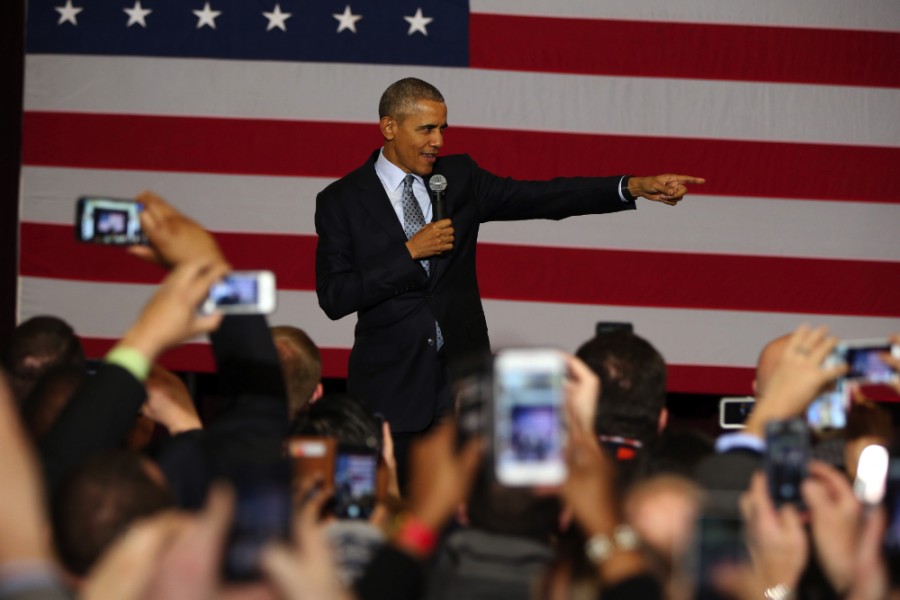 After a speech at the Illinois State Capitol,President Barack Obama stops at the Hoogland Center for the Arts in Springfield, Wednesday, February 10, 2016. (Terrence Antonio James/Chicago Tribune/Pool Photo)

SPRINGFIELD, Ill. — Applause and laughter punctuated the Illinois House Chamber on Wednesday as President Barack Obama visited Springfield – nine years to the day after he took the podium to announce his intention to run for the Democratic presidential nomination.

Obama, while not directly mentioning the budget stalemate deeply affecting social services and higher education, did mention the “accomplishment” of refusing to compromise.

“When I hear voices in either party boast of their refusal to compromise as an accomplishment in and of itself, I’m not impressed,” he said. “All that does is prevent what most Americans would consider actual accomplishments — like fixing roads, educating kids, passing budgets, cleaning our environment, making our streets safe.”

Former Governor Pat Quinn said that while he was in office, there was always a budget in place for higher education and for the 125,000 students utilizing MAP Grants.

The fact that there is no state budget for Eastern or any university is, in Quinn’s words, “just plain wrong.”

The reality of the budget impasse has struck Eastern again, as 198 civil service employees have received layoff notices taking effect in 30 days.

Sen. Dale Righter (R) said he has a proposal out to fund higher education with a reform that will fund the three legs of higher education as well as a plan to pay for it, though it does call for a 20 percent cut.

Despite constant battles in the House, Obama said during his time as a senator the relationships and the trust that he and his colleagues built meant that they came to each debate assuming the best in one another, not the worst.

Obama said it was because of that sort of respect that made room for progress and individuals were willing to forge compromises in pursuit of a larger goal without bending on their most deeply held principles.

Obama said he is convinced that if politicians approach national politics with common sense and a commitment to fair play and basic courtesy, then there wouldn’t be a problem they couldn’t solve together.

Rep. Tim Butler (R-Springfield) said he does not think the president’s speech will change as much of the dynamic in the Capitol Building, but he hopes the leadership will get back to the table and talk to each other to come up with a compromise.

Obama said he believed in a better kind of politics, the same type that made up much of his early career, and offered three steps that he believes would help reform our institutions and to move our system in a way that would help reflect our better selves.

The first step would include taking “corrosive” money out of politics.

He said 150 families have shelled out more money than the rest of America combined during this season’s presidential race. That money is spent with no regard to how people live their lives and is based on some ideological preference.

“Today, a couple of billionaires in one state can push their agenda, dump dark money into every state — nobody knows where it’s coming from,” he said. “I’m not saying the folks with a lot of money should have no voice; I’m saying they shouldn’t be able to drown out everybody else’s.”

His third step would be to make voting easier and make it more modern.

Obama said technology is making it easier to gerrymander so the representatives can get the most people in their favor voting for the things they put on the table.

“That’s why our districts are shaped like earmuffs or spaghetti,” Obama said. “It’s also how one party can get more seats even when it gets fewer votes.”

Quinn said he thought Obama’s speech was for the state and the country and that it is important to point out that democracy does not go forward insulting other people.

“It’s about having strong positions on policy but respecting everyone who is a citizen of our country,” Quinn said. “I think our president made that very clear today.”

Analicia Haynes, Mackenzie Freund and Jason Howell can be reached at 581-2812 or at [email protected]