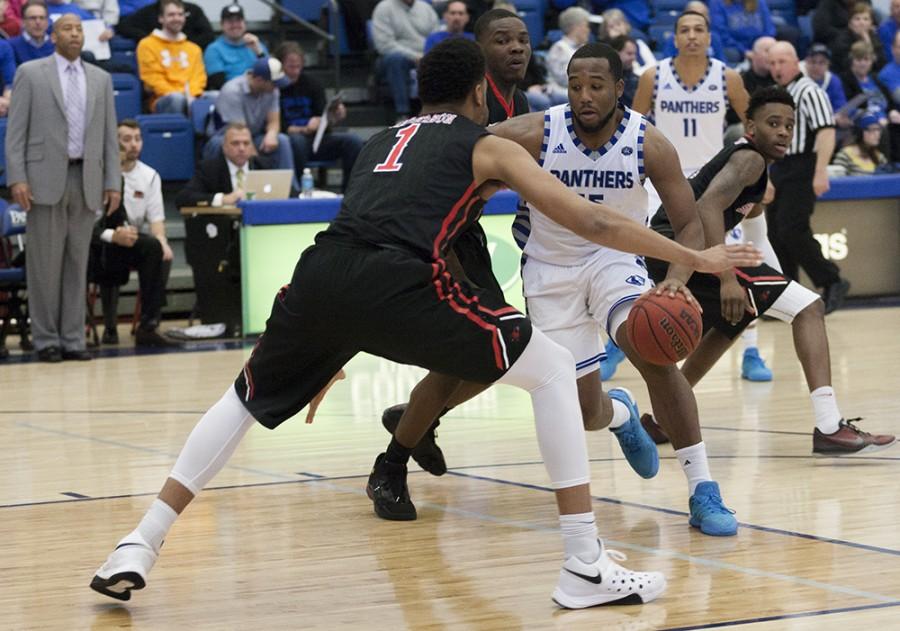 Senior wing Trae Anderson had 27 points during the Panthers' 78-69 win over SEMO on Saturday in Lantz Arena. Anderson has 342 total points averaging 14.3 per game on the season.

Senior Trae Anderson has had a strong passion for the game of basketball since he was just a little kid.

In Eastern’s last game against Southeast Missouri, Anderson had one of the best performances in his career.

He scored 27 points while grabbing 12 rebounds for his second double-double of the season.

That game was just one of the many spectacular performances he has had this season.

From the moment he picked up a basketball at three years old, Anderson has never looked back.

He has taken a different route than other players to get to where he is now, and has turned into one of the Panthers’ most important players.

Anderson did not take an ideal route on his way to leading the Panthers; his took much more hard work.

Anderson spent two years there while averaging 11 points per game, and shooting 50 percent from the field.

His play at Southwestern earned him First Team All-Region 24 selection during his sophomore season.

“Being patient on the offensive end and improving my defense has been a big part of my improved play,” Anderson said.

His strong play did not go unnoticed as Eastern’s men’s basketball team then added Anderson to the roster for his junior season.

Since joining the Panthers, Anderson has evidently become a team leader on both sides of the ball.

“I’ve never really been in this kind of position before,” Anderson said. “I am having a lot of fun and enjoying the experience.”

Anderson has gone onto lead the Panthers all season long with his team-leading scoring average.

As one of the seniors on the team, Anderson has had the role of coaching some of the younger guys on the team through some hard times in the season.

“I always tell my teammates to never lose confidence,” Anderson said. “The coaches have you here for a reason, so just understand that roles change every year.”

Anderson’s role of the team’s leading scorer has certainly been an important one to the Panthers.

His 14.3 points per game is good for 13th in the Ohio Valley Conference this season.

Anderson said that it was no easy task to get to where he is now, and that he has worked hard on improving his play.

“It says a lot about how much I have worked on my game,” Anderson said. “Also because of the coaches taking a chance on me, and giving me the freedom to play my game.”

Anderson credited a large part of his success to his parents.

“I look up to my hard working and dedicated parents,” Anderson said. “They will do anything to see me succeed and I appreciate them so much.”

Anderson learned his basic basketball skills from his father, who used to play basketball.

His father played basketball all through high school, and went onto play collegiate basketball for St. Louis University.

“My game has improved simply by listening to my coaches,” Anderson said. “Our team’s success has come from listening to our coaches and buying into what they want us to do.

Anderson’s play has been a crucial part of what the Panthers have been able to do this season.

The Panthers got off to a slow start to begin the season, and that made for a 1-3 start in conference play.

But after winning six of their last seven games, the Panthers are rolling along.

Anderson’s play has been a big part of the turnaround, as he credits the team’s confidence for the improved play.

Our confidence is what changed things for us,” Anderson said. “Once we started winning a couple games, it gave us the confidence to feel as if we can beat anybody.”

With just five games remaining in the regular season, Anderson’s career is coming to a close at Eastern.

Understandably, Anderson is anxious to end his career on the right note.

“The rest of this season means a lot to me,” Anderson said. “These last few games will definitely be exciting.”

Eastern has set itself up to make a run in the conference tournament next month.

With how he has been playing, as well as the improved play of his teammates, Anderson feels confident in what his team can do.

“I think we can win the whole tournament,” Anderson said. “I do not think there is a team out there that we cannot beat.”

With that being said, Anderson is looking to go out on a winning note, and so far the team is on the right track.

The Panthers expect more of the same from their leading scorer in the last five games of the season.

After five consecutive wins, Eastern has positioned itself for a run, and Anderson is anxious to see what his team can do.

As his season winds down, Anderson will look to continue leading his team to an OVC tournament berth.

“I will never play another college basketball game after this, and that is just crazy to think about,” Anderson said.

Anderson’s journey will continue with the next stop in the road coming against Austin Peay on Wednesday night.