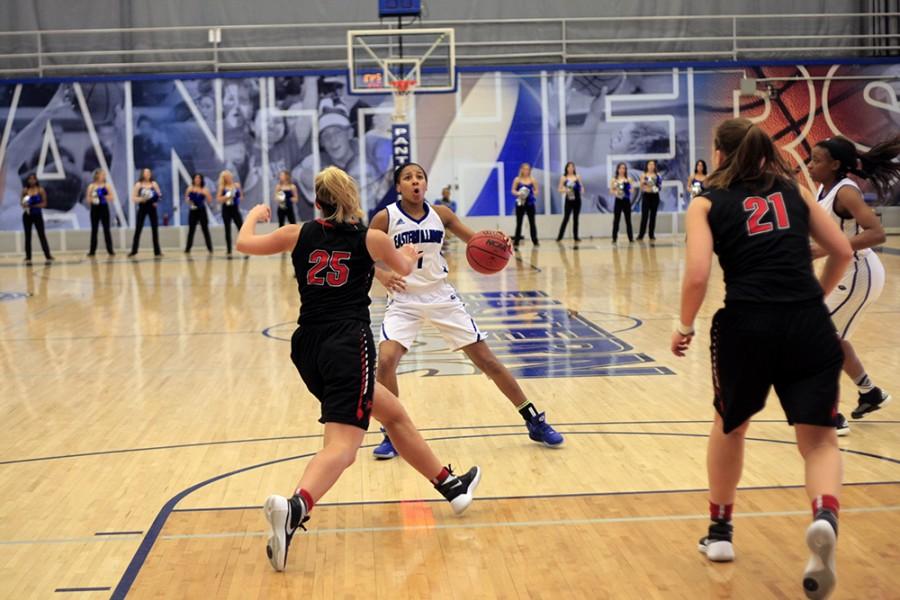 Junior guard Phylicia Johnson looks at the basket to see if she can shoot the ball. Johnson led the Panthers with 19 points in the 64-59 win against Southeast Missouri Saturday in Lantz Arena.

SEMO came into the game with a 7-3 Ohio Valley Conference record, but the Panthers found themselves on top 64-59.

The Panthers have struggled all season to get into the winning column, but Saturday’s game showed what the team is actually made of, junior forward Erica Brown said.

“It gives you hope, basically,” Brown said. “We were on a losing stretch for a minute and it was nice to have that feeling again. I think that’s what we needed to turn the corner.”

Brown recorded a double- double in the contest scoring 12 points and grabbing 10 rebounds.

Although the game was just a mid-season OVC matchup and just the Panthers’ second win of the season, it was as big a win coach Debbie Black has ever had, she said.

The Redhawks led by 13 points in the third quarter at the 9:36 mark. Eastern’s largest lead of seven came with 5:39 left in the game.

With just over nine minutes remaining, the Panthers trailed 43-42, but a pair of 3-pointers on back-to-back possessions by Johnson gave the Panthers a lead they never let go of.

The Panthers have not had many chances this season to hold a lead in the fourth quarter but were able to make the much-needed free throws to hang on.

Eastern’s seven-point lead with only a few minutes remaining was key, Black said.

Black said the team was able to feel more comfortable playing the final minutes with a little bit of a cushion.

It was a physical game between the two OVC schools as Eastern had 16 fouls and SEMO had 22. Black said the team wanted to make sure they didn’t let SEMO “punk” them.

“We had the mindset that we weren’t going to let them just beat us up,” Black said. “They’re not terribly big, I think we stood up to them, we didn’t let them get easy post feeds. I think defense was one of our better games.”

Brown did not go through anything like this recent losing streak in her first two years at Eastern, so to get this win after what has happened this year was great, she said.

“We were down on ourselves,” Brown said. “So to come through and come out with a win, it was nice, I feel like I’m floating right now. I feel so much better now.”

Eastern did get off to a fast start after turning the ball over on the first possession and letting SEMO jump out to a 7-2 possession in just over three minutes.

The Panthers had a week off since their last game, which gave them time to work on more individual drills, rather than just focusing on what the other team is doing. They also had motivational speakers come in to talk to the team, and Black said all of that helped.

Eastern got off to a slow start, but once they started to do the little things, everything else fell into place, Brown said.

“Once we started to do the little things like trying to get that rebound, trying to run down the floor, just guard your girl, I think that’s what loosened us up,” Brown said. “Then we started getting our fast breaks, we started feeling more comfortable out there and that’s what got us our lead.”

Eastern will take on Austin Peay Wednesday in Lantz Arena at 5:15 p.m.