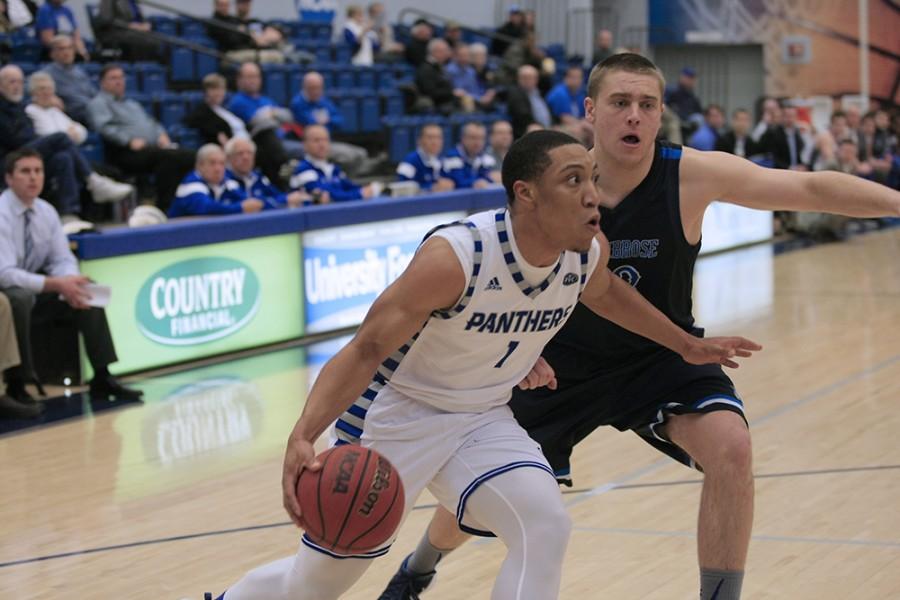 Junior guard Demetrius McReynolds was the leading scorer with 22 points in the Panthers’ 101-59 win against Saint Ambrose Monday in Lantz Arena.

The Panthers 101-59 victory improved their record to 10-13 on the season, as well as the team’s fourth straight victory in Lantz Arena.

Eastern is now 7-3 at home, and will play four of its last six games in Lantz Arena.

Although Eastern finished with a 42 point win, the Panthers got off to a slow start in the game.

The Panthers trailed for the first three minutes of the game before going on a 10-2 run to take the lead.

“Those guys can really shoot, and we probably allowed them to run too much of their offense early on,” Eastern coach Jay Spoonhour said.

With four straight wins now, the Panthers seem to be clicking on all cylinders with just six games remaining in the season.

“We are playing pretty well by doing the things we are supposed to be doing,” Spoonhour said.

The Panthers got a strong showing from a few players as junior Demetrius McReynolds led the way for Eastern.

“Good things happen when you work like McReynolds does, and he works on his craft all the time,” Spoonhour said.

Juniors A.J. Riley and Anthony Johnson also scored 14 points each in the victory.

With the Panthers leading by 20 points at the beginning of the second half, guys like Johnson had some extra playing time.

Johnson’s 14 points was good for a career high, and came out five of six shooting from the field.

“I just try to stay ready at all times, and my teammates always give me confidence when I get in the game,” Johnson said.

After averaging just eight minutes played per game, Johnson stepped up in the second half for the Panthers in his 17 minutes played.

The Panthers shot 56 percent from the field in the game, while most of their success came in the second half when they shot 63 percent.

Eastern was also able to win the battle in the paint as the team outscored St. Ambrose 41-26 under the basket.

Rebounds also proved to be an important part of the win as the Panthers topped the Bees 46-36 on the boards.

While Eastern continued to score on offense, they also limited the Fighting Bees to shoot just 32 percent in the game.

The Panthers will now turn their focus to the next game against Southeast Missouri on Saturday.

Eastern has positioned itself well enough to finish the season strong, as the Panthers sit atop the OVC West at 6-4.

The Panthers will look to improve on that when they tip-off at 11a.m. Saturday against SEMO.