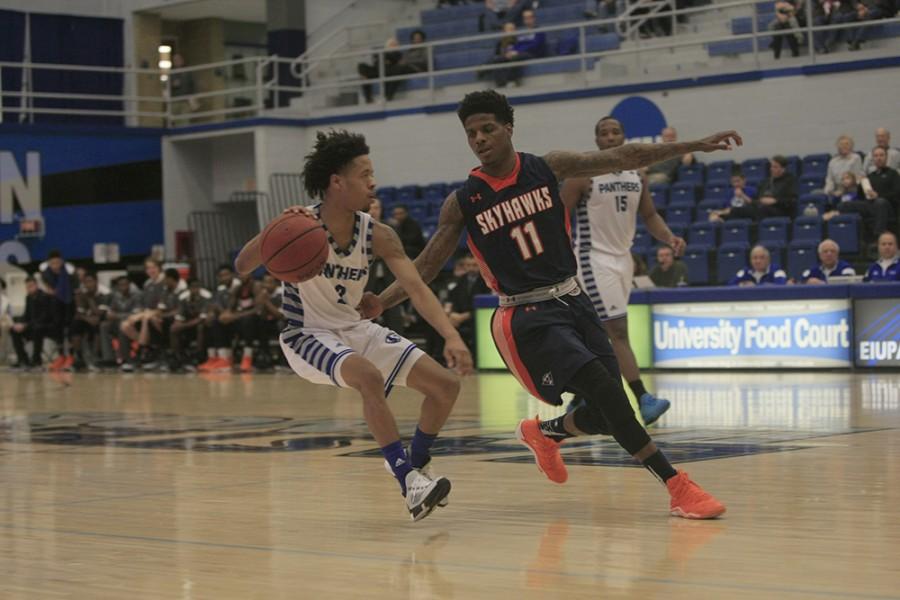 Sophomore guard Cornell Johnston dribbles the ball up the court during the game against Tennessee-Martin Thursday in Lantz Arena. Johnston scored 14 points during the game at Southern Illinois-Edwardsville where the Panthers won 60-46.

With their fifth win in the last six games, the Panthers improved to 9-13 overall on the season and 6-4 in OVC play.

Eastern used a 16-2 run to open the second half which helped build a strong lead as the team would never look back from there.

Defense was key from the beginning as the Panthers held SIUE to just 27 percent shooting in the first half.

The Cougar’s 27 percent shooting was the lowest any team has shot against the Panthers this season.

Eastern also allowed its lowest point total of the season with 46 from SIUE.

In just 27 minutes played, senior Trae Anderson led the Panthers with 19 points in the game.

After scoring less than 10 points in three straight games, Anderson has bounced back to score double digits in the team’s last three games.

Anderson continues to lead the Panthers with an average of 14 points per game.

Eastern also received another solid game from sophomore Cornell Johnston, who had his 14th game of scoring double-digit points.

Johnston scored 14 points against the Cougars on his way to his sixth straight game with 10 or more points.

Johnston continues to be a leader on the team with an average of 11 points and 5.5 assists per game.

The win also moved Eastern up to half a game ahead of Murray State for first place in the West.

The Panthers were able to find a win away on the road, even though that has been a problem for them this season.

Saturday’s win was Eastern’s third win away from Lantz Arena, as they hold a 3-8 record on the road.

The good news for the Panthers is that road games will not be much of a worry for the rest of the season.

Eastern will play five of its last seven regular-season games at home.

The Panthers begin a four-game home stand on Monday night as they welcome St. Ambrose into Lantz Arena.

This will also be Eastern’s final non-conference matchup of the season.

Saint Ambrose comes into play at 7-14 and is also 5-10 in the Chicagoland Collegiate Athletic Conference.

The Panthers should feel good about their chances as the team has won its last three games in Lantz Arena.

Eastern is 6-3 at home this season while the Fighting Bees come into play at 3-7 on the road.

Action will tip-off at 7 p.m. on Monday, as the Panthers look for their fourth straight win.