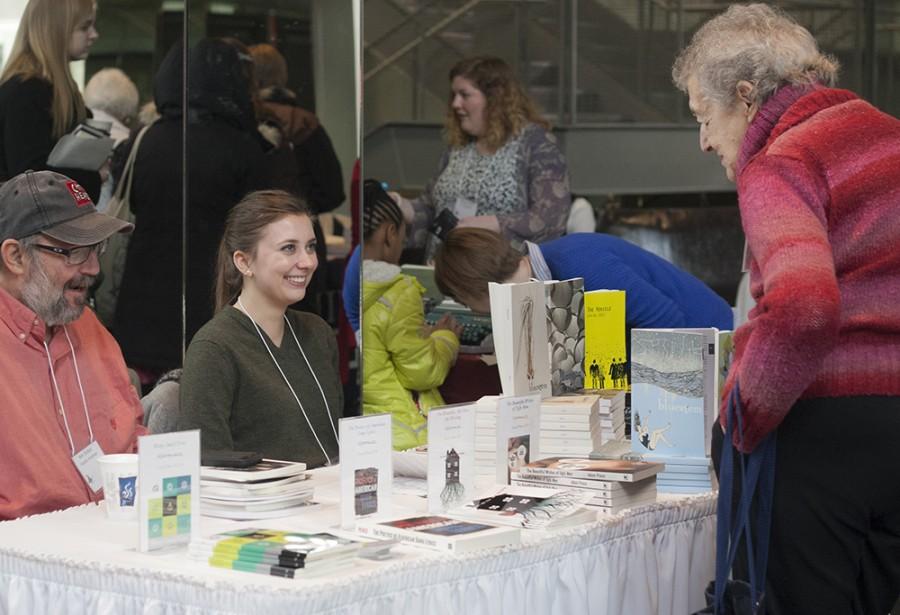 People look at and sell books during a book fair at the Lions in Winter Literary Festival Saturday afternoon in Doudna Fine Arts Center.

The fourth annual Lions in Winter was held in Doudna Fine Arts Center Friday and Saturday.

Moira Crone acted as the keynote speaker for this year’s event and the feature writers ranged from a poet, a creative writer, a fiction writer and a children’s Writer and Illustrator, Jan Spivey Gilchrist.

Gilchrist has illustrated over 73 award-winning books for children, and her first book Gilchrist illustrated, “Children of long ago”, won the People’s Choice Award.

“I was very honored, I was very flattered to be asked,” Jan Spivey Gilchrist said. “They were going to give me the babies and I love that. So I just did the reading for the children. That’s my favorite thing ever.”

Jan Spivey Gilchrist said she has always been an artist, ever since she was little.

“As a kid I was an artist, I mean like little, three, four, five (years old), and I have been doing paintings, galleries for all my life,” Jan Spivey Gilchrist said.

Jan Spivey Gilchrist said in about 1986 she met a renowned author, Eloise Greenfield, at her autographing, where she gave Greenfield one of her drawings.

“So I met her, never thinking I would ever illustrate for her,” Jan Spivey Gilchrist said. “She and I ended up doing 29 collaborations.”

Jan Spivey Gilchrist said that the Lions in Winter reading in the Booth Library went great and by the time she was done reading, the children came up and hugged her like she knew they would.

“Those kids were great. We had a ball, we had a really good time,” Jan Spivey Gilchrist said. “I told the babies before, they were all kind of standing off, I said “before I am done you’re all going to want to hug me” and which they did. They all come over, one at a time showing me their art.”

Jan Spivey Gilchrist said she read the book “The Girl Who Buried Her Dreams in A Can”.

Angela Vietto, co-organizer for Lions in Winter and also an English professor at Eastern, said this was her first year helping out with Lions in Winter.

“Served on the creative writing committee this semester and this year and so I was a part of organizing this wonderful program,” Vietto said. “So it an exciting opportunity to bring in great writers on campus for Eastern students. But it also attracts students from other campuses and colleges. So It’s a great way for us to showcase Eastern by getting students from other places here on our campus.”

McKenzie Dial, a graduate English major, said that attending Lions in Winter was a great opportunity for her.

Dial said that her forte in writing is poetry and non-fiction so the two seminars she attended this Lions in Winter helped her out.

“I went to Bradford Tice’s poetry craft talk and Moira Crone’s fiction craft talk and they were both incredible I learned a lot and feel very motivated to go out and write some more.”

“I want to be able to bring to the community and to students the chance to interact with writers,” Pence said. “To get inspired and learn more about their craft and just celebrate books.”