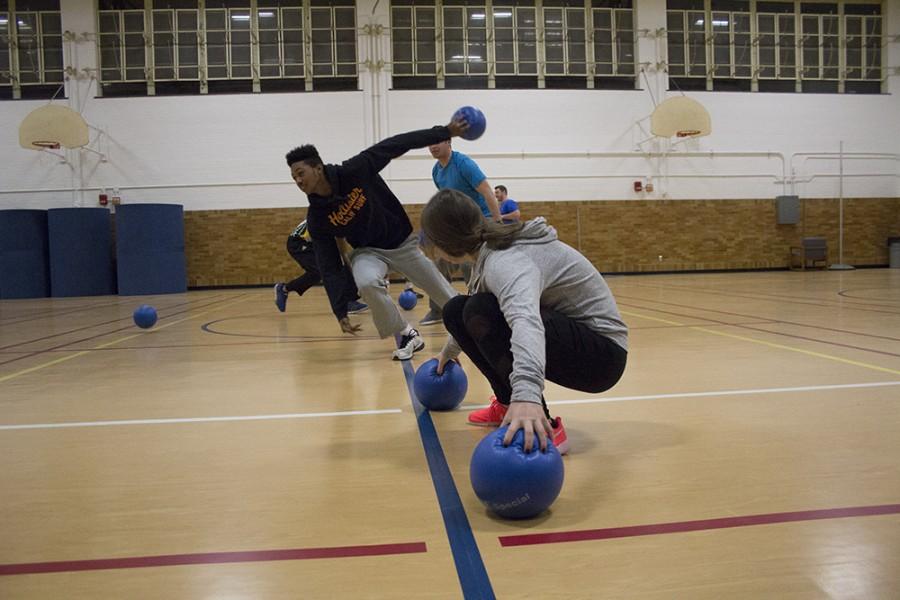 The first two teams grab the balls after the first round of the “It’s On Us” dodgeball tournament Thursday in McAfee Gym.

Many have heard that one in five women will be sexually assaulted in college.

However, this statistic does not hold perpetrators and witnesses accountable nor does it prevent the problem.

That is why Student Body President Shirmeen Ahmad and other members of the “It’s On Us” campaign organized “Knock Out Sexual Assault”, a dodge ball tournament that took place Thursday in McAfee Gym.

This competition was the very of its kind because most “It’s On Us” events are silent programs like putting posters up on campus and having pledge drives Ahmad said.

12 teams and a total of 81 people competed, which exceeded the amount Ahmad said she was expecting.

Of those 81 players, 30 signed a nationwide pledge that stated they will gain consent in sexual situations, create an environment in which sexual assault is unacceptable and intervene before a person commits an act of sexual assault.

Getting students to sign this pledge and spreading its message was the primary reason for the event Ahmad said.

“I know it’s not going to happen over night, but having (the movement) actually start to progress will get people to feel safer on campus and it’ll get us to start talking about this issue and hopefully prevent it from happening,” Ahmad said.

Ahmad admitted that even she did not recognize sexual assault as an issue before taking on the “It’s On Us” campaign.

“Many of us don’t realize that these incidents actually happen a lot. I’m one of those people,” Ahmad said. “Before I picked up this campaign, it was something where I was like, eh it’s probably out there, but now that I’ve been working on it, I’ve actually had a lot of people say “I know someone who’s been sexually assaulted” or “yeah I was in a situation.””

Brody Wilt, a senior sociology major and a representative for both the pride and anthropology-sociology registered student organizations, said recognizing the problem is important but still not enough.

“Sitting there and talking about an issue doesn’t do anything. You have to be active about it,” Wilt said.

The Obama Administration launched the “It’s On Us” campaign in September of 2014 for these reasons according to the official white house website.

““It’s On Us” aims to fundamentally shift the way we think about sexual assault, by inspiring everyone to see it as their responsibility to do something, big or small, to prevent it,” a press release from the website said.

Ahmad said the nationwide campaign officially started at Eastern last year, but the lack of tradition and large amount of colleges that are part of the movement does not make its message any less important.

“We as a campus need to stick together and that’s why it’s on all of us. Each one of us count, and we can’t just expect the situation to go away,” Ahmad said.