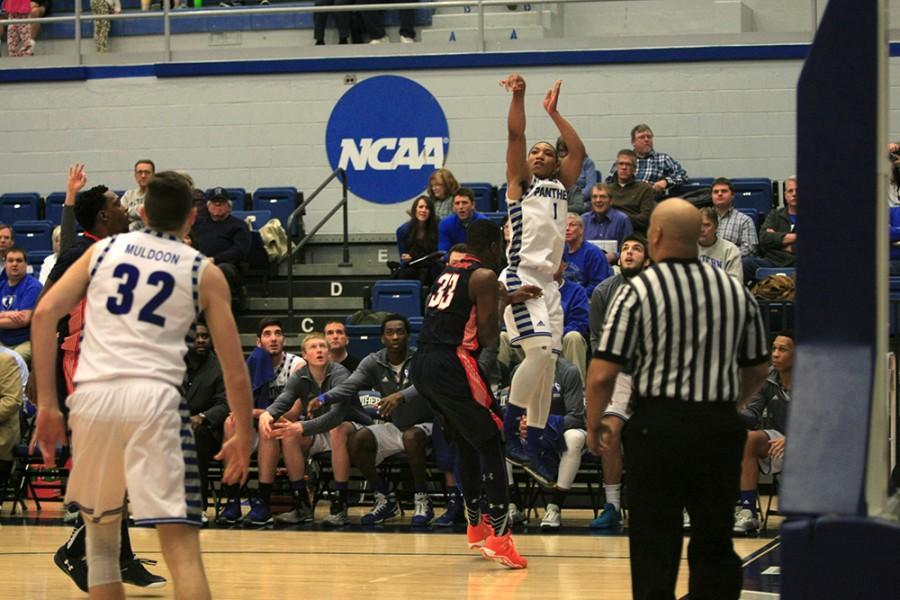 Junior guard Demetrius McReynolds led the Panthers with 27 points in the game against Tennessee-Martin Thursday in Lantz Arena. The Panthers beat Tenneseee-Martin 82-74.

The Eastern men’s basketball team defeated Tennessee Martin, 82-74, for its second straight win.
The Panthers improved to 8-13 overall on the season, as well as 5-4 in the Ohio Valley Conference.
Both teams went back and forth throughout the game, and Eastern used a 9-0 run to close the half and lead by one at the break.
There was a total of 17 lead changes in the game, while the score was tied 13 times.
Eastern went on to shoot just 40 percent in the game, but the Panthers won the battle in the paint, 39-38.
“I think the biggest key of the game was winning the rebounding battle,” Eastern coach Jay Spoonhour said.
The Panthers were led by senior Trae Anderson, junior Demetrius McReynolds, and sophomore Cornell Johnston as all three scored in double digits.
McReynolds’ 27 points came mostly from behind the arch as he was 6 for 12 from deep in the game.
Although Eastern allowed the Skyhawks to shoot 50 percent, and win the battle in the paint, they still came out on top.
“Coach told us that we didn’t play defense the whole first half, so we need to go out and do better in the 2nd,” McReynolds said.
While Tennessee-Martin still shot 50 percent in the 2nd half, the Panthers made some important stops down the stretch to take the lead.
“You have to be engaged in what’s going on, you have to work, and you have to think or else you can’t guard them,” Spoonhour said.
Anderson had a stretch of six straight points, while McReynolds had a stretch where he scored three consecutive threes.
“I was planning on putting in Anderson because McReynolds needed a break, but once he made all those threes I just couldn’t take him out yet,” Spoonhour said.
Eastern has now won four of its last five games and the Panthers are headed into a softer part of the schedule.
Although the schedule gets easier for the Panthers, the team is not treating it any differently.
“We don’t take any team lightly, and we don’t underestimate any opponent we come up against,” senior Trae Anderson said.
The Panthers have eight games remaining in the season, with five being at home.
Eastern has had its most success at home as they hold a 6-3 record in Lantz Arena.
The Panthers will face SIUE twice and Southeast Missouri two times as well, while both of those teams sit at the bottom of the conference.