Ellington-Monroe murders portrayed in the square 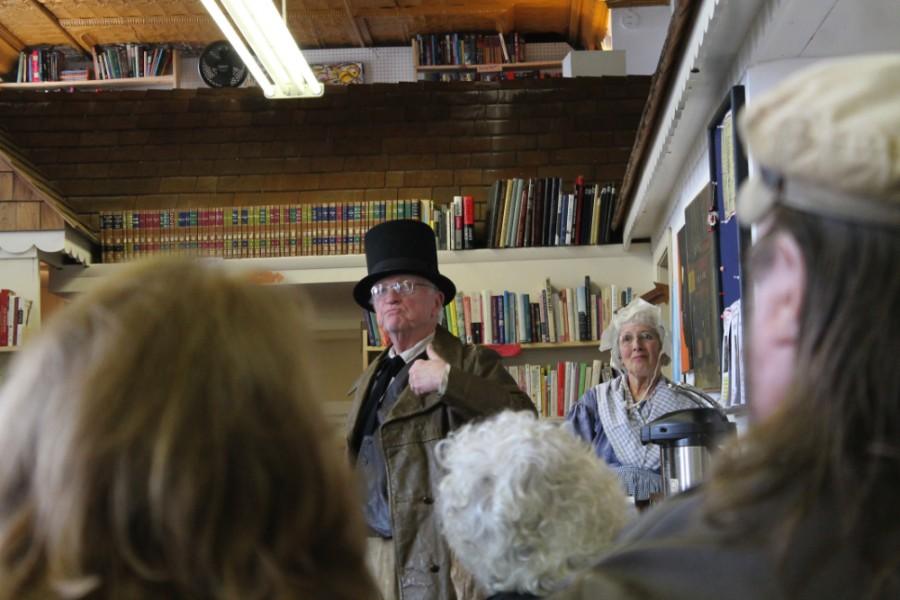 An almost two-year dispute between a father and son-in-law ended in both of them being killed in what is now known as the Ellington-Monroe murders. The murders were portrayed at Bob’s Bookstore Wednesday afternoon.

The portrayal was put on by the Academy of Lifelong Learning and planned by Marita Metzke, project coordinator for the academy, and Dick Hummel, a vice president for the Five Mile House.

Metzke said she and Hummel had talked about putting on the event because Hummel had done research on the murders.

“Bob’s Bookstore was on the site of the murders,” Metzke said. “Between the two of us we decided to cook up this Academy of Lifelong Learning event.”

Hummel dressed and spoke as Nathan Ellington and told the audience what the events were leading up to and after his murder.

Adolphus Monroe and Nathan Ellington had gotten into a confrontation outside Monroe’s business.

The argument had continued after the two men moved inside, where the argument got physical and ended with two shots being fired.

Hummel said the first shot had just grazed Ellington’s head, which made him angrier and he lunged for Monroe and both men ended up on the floor.

“Someone did come and grab me and pulled me from my position on top of him,” Hummel said as Ellington. “In doing so, Adolphus’ arm was free and he managed to pull out the second pistol and shoot.”

The second bullet hit Ellington in the chest and he was taken home, while Monroe was immediately arrested.

Lisa Judd, one of the owners of Bob’s Bookstore, said she did not know the murder had happened and they did not originally know the story behind the murder.

“It was a great way for us to be able to stay at work but also learn the whole story of the murder,” Judd said.

Eight days after Ellington was shot, he died from infection after saying his last words to his family.

“I managed to croak out the words ‘I hit him, I struck him, I’m sure he was in fear of his life. He shot me in self-defense,’” Hummel said.

Monroe had a four-day trial in January 1856 and was convicted and was sent to be hanged on Feb. 15.

Monroe’s wife and mother were able to get the execution day postponed for three months by the governor two days before Monroe was to be hanged, but the people who came to watch the execution would not have the delay.

“Some of the mob went down and pounded through the wall of the jail because they were determined to hang Adolphus that day,” Metzke said.

After getting Monroe out of the jail they realized they could not hang him on the square because the trees were too young so they took him to what is now Kiwanis Park to hang him.

“There was an established tree there and they did the deed there,” Metzke said. “They then put the body in the back of a truck and drove it around the square a couple of times so everyone could see that the deed was done.”

A song called “The Ballad of the Sweet Willow Tree” with words by Gaye Harrison followed the story of the Ellington-Monroe murders.