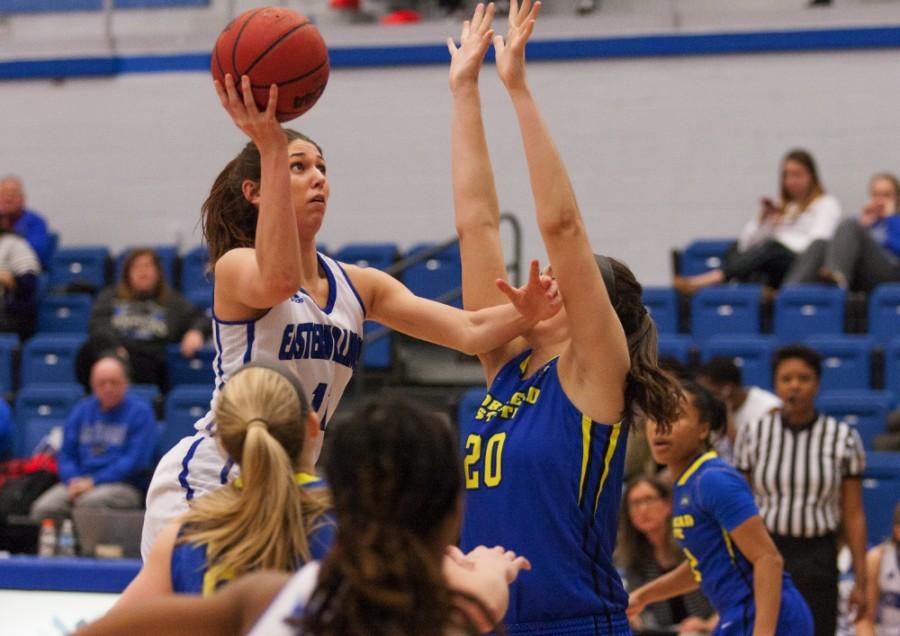 In the midst of an 18-game losing streak, the women’s basketball team is on the road for the first of a three game road trip against conference opponent Austin Peay.

Eastern is coming off a game where it looked outmatched against rival UT Martin. With the record at 1-18 and 0-7 in the conference, the team is playing for a boost in confidence. Austin Peay, however, has won three of their last five games and just recently defeated Morehead State on the road, 96-75.

Austin Peay is 6-13 overall with a 4-2 record in the OVC. Five of their six wins this season have come on their home court. Senior guard Tiasha Gray is the team’s leading scorer with 19.9 points per game. She also displays quick hands on the defensive side of the ball with 47 steals this season. Another top performer is sophomore forward Sydney Gooch who averages a team high 5.9 rebounds a game.

Head coach Debbie Black recognizes Gray as one of the best at her position in the conference.

“You have one of the best guards in our conference in Gray,” she said. “She obviously leads them in scoring and steals and she does a lot of tough things. We are going to have to find a way to at least control her and then just play the people who are ready to play and that is kind of where we are at, at this point.”

In the game against Morehead State, Gray handed out a school-record tying 13 assists. She also scored a game-high 28 points while having six steals and five rebounds in the 33 minutes she played. Gooch earned her first double-double of the season with a 14-point, 12-rebound performance against Morehead State.

For Eastern to have a chance, they will have to cut down on turnovers as the team had 24 of them during the last game, which led to 23 points for UT Martin. Turnovers have been a problem for the young team, along with rebounding.

The top scorer from last game for Eastern was senior guard Alece Shumpert who came off the bench. Sophomore guard Grace Lennox leads the team in assists and averages 8.7 points per game. Freshman forward Halle Stull also has 5.3 rebounds per game this season.

Shumpert had seen limited action up until last Wednesday’s game, which shows Black is changing up who earns playing time.

“I’ve just about played everybody on my roster,” she said. “It’s just going to be the people that are ready to play.”

Eastern is 17-22 all time against Austin Peay. Eastern lost both head to head matchups last season to Austin Peay. When the Panthers played them on the road they lost, 83-72. The last time the Panthers defeated them was in 2014.

The OVC contest begins on Saturday at 4 p.m.