President Barack Obama gave his last State of the Union speech Tuesday where he addressed the economy, technology, climate change, cancer and the safety of the US.

Regarding the economy, Obama said 14 million new private sector jobs have been created; manufacturing has created 900,000 new jobs and the unemployment rate had been cut in half, as well as cutting deficits by almost three quarters.

“The economy is changing in profound ways,” Obama said. “Technology doesn’t just replace jobs on the assembly line, but any job where work can be automated.”

He said as a result of this, more wealth and income is concentrated at the very top.

Obama cited the importance of education, saying the US needs to recruit more teachers, offer pre-kindergarten classes for all students, giving students hands on math and science classes and making college affordable.

“Providing two years of community college at no cost for every responsible students is one of the best ways to do that,” Obama said.

While Obama acknowledged that both political parties might not agree on healthcare anytime soon, both parties can improve economic security.

Obama also acknowledged that it has been difficult to find agreement in the role the government should play in making sure the system is not rigged in favor of the wealthiest and biggest corporations.

While he said a thriving private sector is important and there are outdated regulations that need to be changed, he also insinuated the blame for certain economic woes had been placed in the wrong places.

“Food stamps did not cause the financial crisis; recklessness on Wall Street did,” Obama said. “Immigrants aren’t the reason wages haven’t gone up enough. Those decisions are made in the boardrooms that too often put quarterly earnings over long-term decisions.”

After a comment made last year by Vice President Joe Biden saying with “new moonshot” the US can cure cancer, Obama announced a national effort to get it done.

“Let’s make the United States the country that cures cancer once and for all,” Obama said.

When bringing up climate change, Obama said anyone who wants to dispute the science behind it would be “pretty lonely.”

“You will be debating our military, most of the United States business leaders, the majority of the American people, almost the entire scientific community, and 200 nations around the world,” Obama said.

Obama also addressed the fear some have of the US “getting weaker” and the US’s enemies getting stronger.

“The United States of America is the most powerful nation on Earth. Period,” Obama said. “We spend more on our military than the next eight nations combined. People of the world do not look to Beijing or Moscow to lead. They look to us.”

Obama said the number one priority right now is protecting the U.S. people and going after terrorist networks.

“If this Congress is serious about winning this war, and wants to send a message to our troops and the world, you should finally authorize the use of military force against ISIL,” Obama said.

Obama said there is a smarter approach to global matters than what has been used in the past.

“US will always act, alone is necessary, to protect our people and our allies, but on issues of global concern, we will mobilize the world to work with us and make sure other countries pull their own weight,” Obama said.

Obama also stated his goals to shut down the prison at Guantanamo.

“It’s expensive, it’s unnecessary and it only serves as a recruitment brochure for our enemies,” Obama said.

In what he called the most “important part of his speech,” Obama said the future the US wants will only happen if everyone works together.

“Democracy grinds to a halt without a willingness to compromise,” Obama said.

He said one of the few regrets of my presidency is that the rancor and suspicion between the parties has gotten worse. 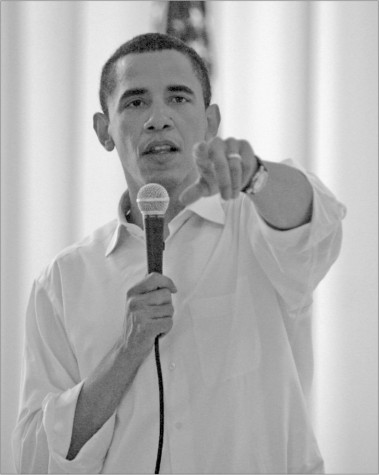 “If we want a better politics it is not enough to change a Congressman or a Senator or even a President,” Obama said.

He talked about reducing the money spent in politics so a handful of families, hidden interests can not “bankroll” elections as they have done in the past, making it easier to vote, and ending the drawing of congressional districts that makes politicians pick their voters instead of the other way around.

“This will only happen when the American people demand it,” Obama said.