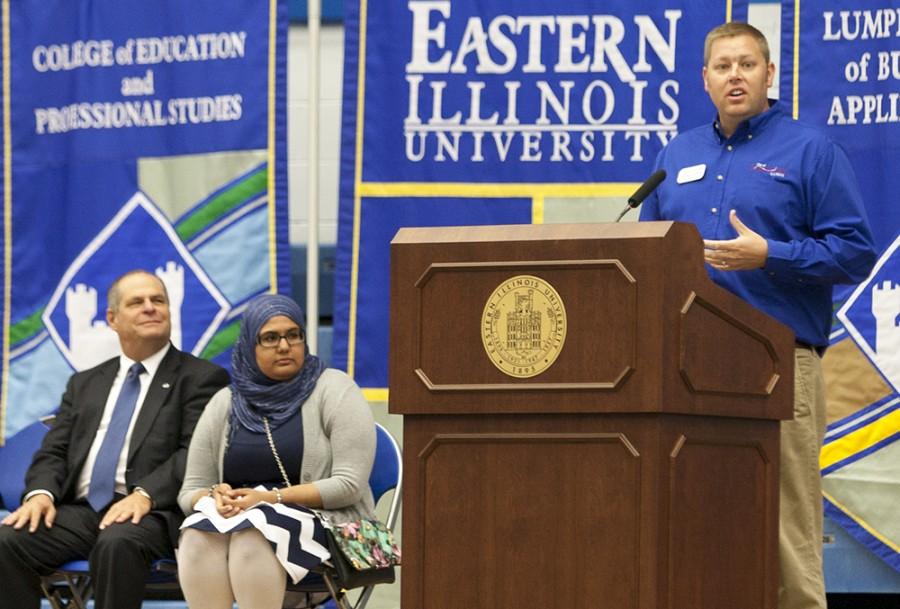 “It was big shoes to fill, and then I was dealing with the loss of Larry, who was kind of like a mentor,” Combs said.

With support from the people and community around him, Combs decided to take the position after only having served on the City Council for two years.

Combs grew up in Charleston and graduated from Charleston High School in 1999, then went on to study at Eastern, graduating in 2003.

Shortly after, he left his hometown and studied at the Logan University College of Chiropractic in Chesterfield, Missouri. Combs earned a second bachelor’s degree in Human Biology, and later his doctorate in Chiropractic.

He returned to Charleston with his wife soon after graduation and opened the local business Combs Chiropractic & Wellness Center. Along with being mayor and running the chiropractic practice with his wife, the Combs also stay busy raising three children: two daughters and one son.

Combs said his biggest accomplishment during his time as mayor will be coming up in February, hinting that a significant announcement is to come. “[For] the city as a whole, there are some phenomenal things coming down and I am super excited about it,” Combs said.

Combs refused to take sole credit for this to-be-announced accomplishment, but said that it centers on his main goal of helping Charleston grow.

“There was the economy, and all that stuff that was going on in Charleston – we’ve not been bad, but we’ve kind of stagnated a little bit,” Combs said. “I want to make it easier for businesses and developments and things of that nature.”

Combs said a major goal on his list is to bring members of the Charleston community and Eastern students together. Combs said he could not stress enough the importance of replacing negative perceptions of Eastern with positive thoughts and words.

“We just have to be more supportive, and we just need to realize Charleston is Eastern, [and] Eastern is Charleston,” Combs said. “I am fighting for it.”

Combs said he hopes community members can realize that Eastern plays a big part in Charleston, and how many residents are employed at the University.

“Without Eastern, we are just a small Midwest town; Eastern also brings a lot of culture,” Combs said. “So we have to realize the role that Eastern plays in our community, and how important it is.”

Combs said Eastern is a big reason why we have many local businesses and the need for a big hospital, like Sarah Bush Lincoln Health Center.

As mayor, he said he encourages Eastern students to tell him his concerns since they are residents just like the rest of the community. “[Eastern students] are a part of this community now, and you really are,” Combs said. “My office is opened to [students] too; I want them to feel like they can come here and express their concerns and I’m not going to look at them and say ‘well, you’re just some Eastern student.’”

Combs said students need to embrace and get more involved in community events in order to become a bigger part of the Charleston community.

While reflecting on his experiences so far as mayor, Combs also said that he has learned many things, and therefore will “probably” plan on running for reelection.

“I’ve learned there really is just a lot of misrepresentation of what the city does, how the city works and what we stand for,” Combs said.

Adding another goal to the list, Combs said he hopes to see more community members realize that workers and members of the City Council only want to see Charleston “thrive and grow.”