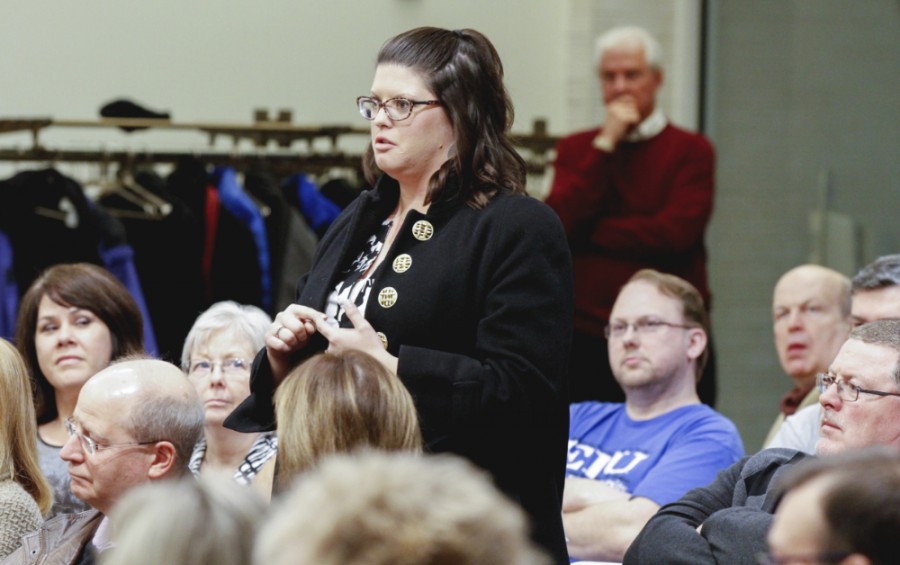 More than 60 students, faculty, staff, alumni and community members gathered in the atrium of the Table Arts Center during a public forum on Thursday regarding the possibility of WEIU-TV’s involvement in the upcoming Federal Communications Commission spectrum auction.

President David Glassman and others organized this event to not only inform the public about the idea to sell the station’s frequency but also to hear comments and concerns from those who would be affected by this decision.

“I am a strong believer in informed decisions particularly major decisions that will have implications both short term and long term,” Glassman said. “The forum today is to just become acquainted with what the option is and also to hear your thoughts and your comments that you might have relative to this particular opportunity.”

Among the people commenting at the forum was Shannon Satterlee, a sophomore journalism major, who said her only reason for attending EIU was the unique hands-on experience that is WEIU-TV.

“I saw that I was going to be a [WEIU-TV] news reporter this semester and I cried because I was so happy,” Satterlee said. “Then I saw they’re wanting to selling the station and I wanted to cry again.”

If the frequency was sold, indeed, students involved in the program would no longer have the opportunity to gain hands-on experience through airtime.

“We will still produce news as long as I’m the News Director,” Runyon said.

Students involved in the program are not the only populace who would be negatively affected by the decision to sell the frequency. Viewers would also suffer.

According to Jack Neal, the General Manager of WEIU-TV/FM, more than 60 percent of their viewers are 65 and older.

While this may be merely a statistic to some, community member Kimberly Harris said her mother is one of these viewers. Harris also said that she did not want those faced with the decision to sell the spectrum to forget this demographic.

“There are all these people who are 65 and older, and even a little bit younger, and they watch WEIU all the time,” Harris said. “They don’t want to see it go.”

Although many people that spoke with Harris about this decision agreed they are opposed to change, Neal said at least some modifications are inevitable.

“Everything will change to some extent anyway,” Neal said. “so when (the auction process) is all done, some time in late summer or early fall, the (FCC) is going to take a look at what they have, decide who’s going off air, and then they’re going to repack probably 800-1,200 T.V. stations that are remaining on air in lower channels.”

The option to be involved in the spectrum auction was made available to hundreds of stations across the U.S.

Though the decision to be involved in the auction has not yet been made, Glassman along with others who are voting on this will consider many factors including the amount they would receive for the frequency as well as community members and students.

Glassman also said the future of broadcast television is a considerable factor as well.

“There’s also the factor of what broadcasting will be like 10 to 15 years from now when we move even further into the digital age,” Glassman said.

The decision to be part of the auction will be made on Tuesday, but until then Glassman is welcoming feedback via email.