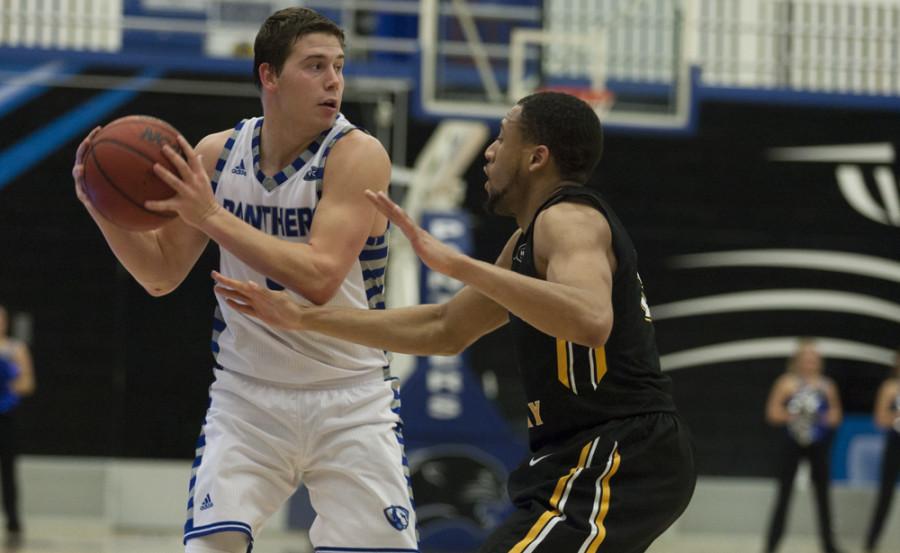 It will be a rare sight in Macomb on Saturday afternoon when rivals meet for the second time in a month. The Eastern men’s basketball team will face a Western Illinois team that has lost two of its last three games.

In their first matchup on Nov. 21, the Panthers led at halftime 37-33, but the Leathernecks shot 68 percent from the floor in the second half en route to an 83-63 victory.

While the Leathernecks endured a few losses since then, the Panthers earned a pair of home victories over Indiana State and Northern Kentucky. Eastern coach Jay Spoonhour said the last few games have shown that the Panthers are a different team at the moment, particularly the newer players.

“Those guys will keep getting better and better,” Spoonhour said. “You won’t have many games like that all season.”

One of Spoonhour’s newest players that has shown progression throughout the year is freshman guard Casey Teson. Teson totaled 12 points, all on three-pointers, in the first loss to Western, and has since averaged nine points in the last four games.

“He’s doing his best defense on the guards, which is helping him find his way onto the court,” Spoonhour said.

Teson had nine points in Wednesday’s loss at Marshall, but senior forward Trae Anderson picked up the Eastern offense with a career high 31 points in the 82-76 loss.

Anderson has been Eastern’s leading scorer so far, averaging 16 points per game.

In a win last week against Northern Kentucky, he recorded a double-double of 19 points and 12 rebounds. It was the first time he grabbed double-digit boards in a game this season.

“It’s a whole new thing for Trae, being relied on this much, but he’s our best player,” Spoonhour said. “But he did great at Marshall.”

On the other side of the court, the Leathernecks have not had their way against bigger opponents lately.

Creighton handed Western its first loss of the season, 97-67, exactly a week after they defeated the Panthers the first time.

Western also lost to Iowa, 90-56, Monday. Iowa was the second Big Ten opponent the Leathernecks have faced. Western defeated Wisconsin in its season opener, 69-67. Both the Creighton and Iowa losses came on the road.

“They hit a lot of tough shots in the end,” Blackmon said. “We just didn’t make enough to keep up with them.”

Tipoff is set for 2 p.m. Saturday at Macomb. Following the game, Eastern will have a week off before next Saturday’s game at Houston.