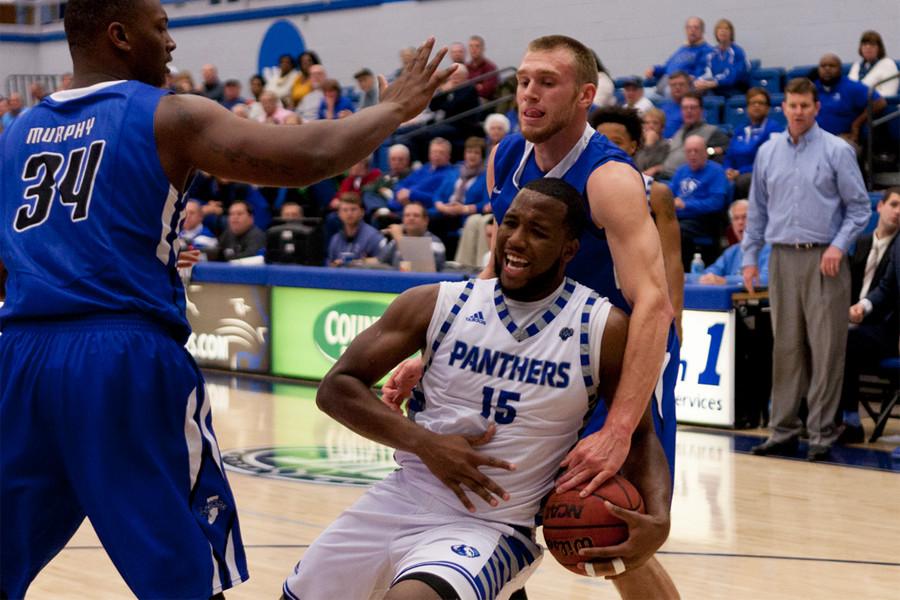 Senior wing Trae Anderson scored 12 points during Eastern's 68-62 win over Indiana State on Dec. 1 in Lantz Arena. Anderson had a career high 31 points against Marshall on Wednesday in Huntington, W.Va.

Trae Anderson led the Panthers with 15 points through 23 minutes of Wednesday’s game at Marshall. But early in the second half he was charged with his fourth foul, and that gave the Thundering Herd momentum throughout the second half.

But when Anderson returned what looked like a run-away victory for Marshall quickly went away. Anderson led Eastern on an 18-7 run to shorten the deficit to 71-66 with 3:48 to play in the game. He finished with a career-high 31 points, but the Panthers were eventually defeated 82-76.

Anderson picked up his fourth foul near the under-15 timeout and had 19 points before he had to sub out. He has reached double-figure scoring in three of the last four games.

“He did a nice job, particularly when you look at his points,” Eastern coach Jay Spoonhour said. “But defensively he was pretty good and rebounded. It was a tough shooting night for us.”

Junior guard AJ Riley and freshman forward Patrick Muldoon were also able to reach double-figure scoring. Riley finished with 13 points, while Muldoon had a career-high 13 points for the game.

Throughout the game, Marshall used a fast-paced offense to grab some big runs, including a 13-0 run to start the game before the first media timeout. The Herd led by as much as 16 points midway through the second half, 64-48, before Anderson reentered.

Junior forward Ryan Taylor led the Herd with 22 points, while Marshall’s second-best scorer did not start the game. Guard CJ Burks came off the bench and scored 19 points, including 10 in the first half. A total of five Marshall players reached double-figure scoring.

Spoonhour said the Herd’s offense is similar to one run by the Phoenix Suns when Mike D’Antoni was head coach. It makes sense that Mike’s brother, Marshall head coach Dan D’Antoni, runs that offense as well.

“They are trying to get it and go, and take off right away,” Spoonhour said. “We did a really nice job making them pass it, sometimes five-to-six times. It’s a big deal.”

The loss moves the Panthers to 2-5 on the season, while the Herd picked up their fist win Wednesday.

Sophomore guard Cornell Johnston struggled shooting the ball, missing all of his shots from the floor, and finishing the game 0-for-11. He did knock down a pair of free throws and dished out eight assists.

“That’s just the way it goes, sometimes you make them and sometimes you don’t,” Spoonhour said. “He can do lots of stuff. He had eight assists, held us together and I never took him out once.”

Johnston had a season high 24 points in Saturday’s overtime win over Northern Kentucky.

Marshall also outrebounded the Panthers by a sizeable margin of 49 to 31. Senior forward James Kelly grabbed 14 rebounds, to go along with 16 points for a double-double. Kelly has been Marshall’s leading scorer, averaging 15.9 points per game since transferring from Miami in 2014.

This was the first game of the Global Sports Classic for both teams. Eastern will play at Houston for its next tournament game on December 19th. Meanwhile Marshall will host North Carolina Central December 14th for its second game.

Both will have one game between that aforementioned matchup. Eastern will be on the road at Western Illinois Saturday to finish out a home-and-home series with the Leathernecks. Western defeated Eastern 83-63 in the previous matchup, and was unbeaten at the time.

They have since lost to Creighton and Iowa by an average of 32 points. Spoonhour said that he thinks his team has matured more since that loss last month.

“It’ll keep getting that way, they’ll be fine,” Spoonhour said. “Younger guys like Muldoon and Marshawn Blackmon will keep getting better and better.”