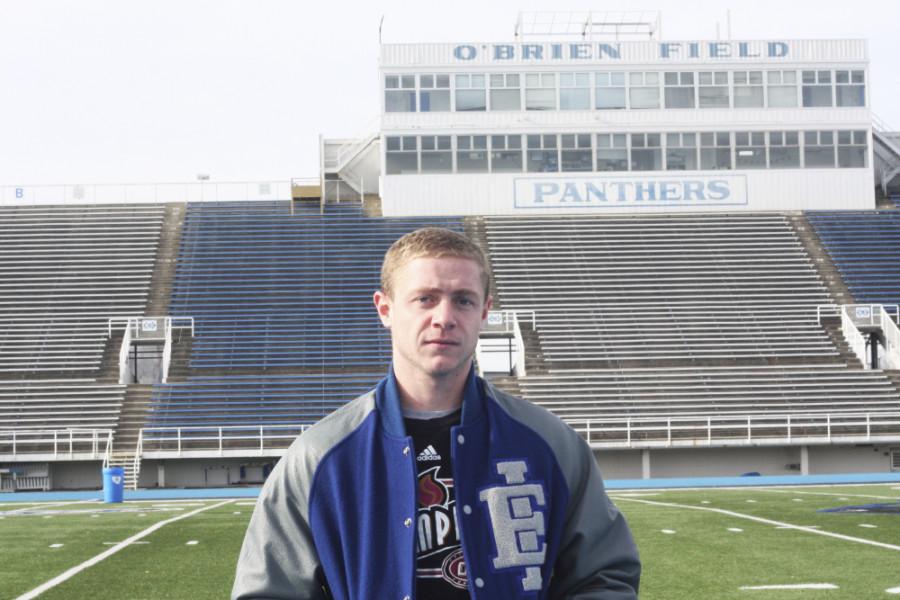 Red-shirt senior Joe Calio plans to be a leader for the Eastern track and field team this year. Calio earned All-OVC honors last indoor season as a part of the distance medley relay team that placed first at the OVC championships.

As many seniors are in their final years, Joe Calio of the men’s track team will be a leader for the rest of the team in his final season as a Panther.

Calio comes from nearby Mattoon High School where he was a state qualifier for both track and cross-country. He still keeps in touch with his coach from high school and attends some of the practices when he can.

He had the chance to be a mentor for some of the high school runners at his alma mater this summer.

“I got an opportunity this summer to go to Colorado with them for a week and give some talks about college running and what its like,” he said. “It’s really cool how I can have an influence on some kids’ lives and they respect me and I’m able to give them some wisdom about it all.”

At the collegiate level, Calio competes in both cross-country and track. He earned All-OVC honors last indoor season as part of the distance medley Relay team that placed first at the OVC Championships. During the outdoor season, he ran his best steeplechase time at the IU Billy Hayes, which ranked him at fourth on the Eastern career list.

Over his career here at Eastern, Calio has dealt with multiple injuries including a couple stress fractures and stress reactions, Achilles tendonitis and shin splints.

“I’ve gone through a lot of injuries while I’ve been here,” he said. “Freshmen, sophomore and part of my junior were really hard, just a lot of injuries and ups and downs. After I got over that hump, the training has been going really well and I am pretty satisfied so far with this year.”

During the indoor season, he participated in the mile and the 3K. For the outdoors, he competed in the 800-meter, 1500-meter and the steeplechase.

“I’ve always loved the mile,” he said. “The mile has been one of my favorites. Been doing it since I was a kid, and I also enjoy the steeplechase a lot.  Those are probably my two events that I really do like.”

His top mile time from last season was four minutes and 12.56 seconds. He scored points for the men’s team that went on to win the Outdoor OVC Championship in the steeplechase.

The redshirt senior has high praise for coaches Erin Howarth and Brad Butler.

“Coach Howarth loves her athletes very well and she’s looked out for all of us,” he said. “She has helped me a lot with the injuries and she helps me with life, gives me a lot of wisdom. Her and coach Butler both, I don’t know who I would’ve been without them.”

Howarth also had strong words to say about Calio as she coached him through his ups and downs with injuries. One thing she noted about Joe was his ability to create a positive environment for his fellow teammates.

“I can’t say enough awesome things about Joe,” Howarth said. “It is hard to put into words what Joseph Calio has meant to this team and to this program throughout the last four and a half years. Joe is one of the best leaders and best teammates I have seen in my coaching and as my days even as an athlete.”

Senior Derrick Johnson said Calio is the type of teammate who is always there to help out another.

“He’s always there for anyone who needs it, and more importantly he wants to be there for them,” he said. “He leads by example and never lets any frustration get the best of him. He’s just the picture of what a teammate should be.”

Howarth noted the impact that will be felt by the team when Calio eventually graduates at the end of the year.

“We will greatly miss Joe next year,” Howarth said. “He wasn’t in our top 5 at the NCAA Midwest Regional meet this year, but there is no doubt that without his leadership skills and his encouragement, this team never would have been able to accomplish what they did in their 13th place finish. Joe is one in a million.”

The indoor track season begins on Friday with the EIU Early Bird.