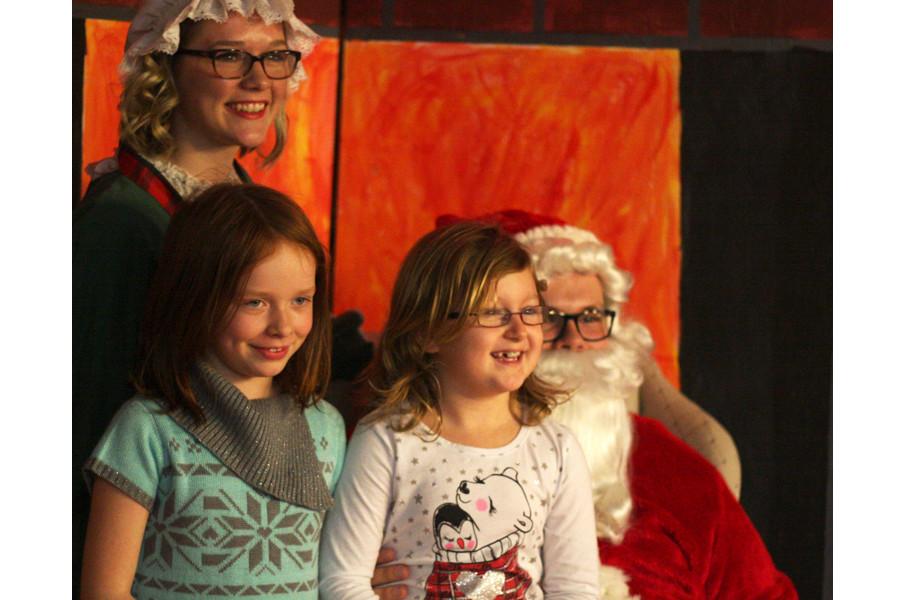 Guests were greeted with Christmas scenery and music playing in the background.

People were able to participate in a variety of activities such as decorating and enjoying Christmas cookies, creating four different crafts, playing Bingo and eating popcorn. All the activities were set up in stations that had an Eastern volunteer there to ensure that children could enjoy the things provided.

While the children were making crafts, they received a visit from special guest Santa Claus, who was played by John Jaso, a junior history major. Other guests included a reindeer and snowman played by members of the Sigma Nu fraternity.

Morgan Young, a senior elementary education major and NRHH member, said she and other members of the NRHH have been planning Winter Wonderland since September.

“We are doing this with the help of volunteers,” Young said. “We brought in anyone who volunteered to help.”

Young said the Winter Wonderland is not only a way to bring in the Christmas spirit, but also to bring the Charleston and Eastern community closer.

“I feel like it is always Charleston versus Eastern. We want to bring the community into us and invest in them in return,” Young said.

Anthony Rodriguez, a junior communication studies major, said he thinks Winter Wonderland was a good way to open up campus.

“We are able to interact with local residents of Charleston,” Rodriguez said. “We need to be more inviting to campus.”

Rodriguez and his fellow Sigma Nu brothers, Christian Lohr, a junior kinesiology and sports studies major, and Mason Karsteter, a freshman undecided major, were helping out their fraternity brothers by volunteering. The brothers helped out by decorating the space before the Christmas celebration and by ensuring the popcorn was always fresh.

Lohr said he thinks that the NRHH is making a difference by inviting the Charleston community to campus.

Charleston resident Amanda Adamson said she thinks Winter Wonderland is a way to bring the Charleston and Eastern communities together.

Adamson said that she attended last year and it is a good way to enjoy activities with her children.

Young said the Christmas celebration would also be enjoyable for Eastern students.

“Eastern students could have fun too if they love kids and love to volunteer,” Young said. “(Volunteering) is great way for students to help out with the community.”

Young said she was able to revel in with the crafts the NRHH provided for the kids herself.

“I had fun with the crafts just as we were picking them out and setting them up,” Young said.

While it is important for the Eastern students to enjoy volunteering with NRHH, Young said it was her main goal for the local children to have fun.

“We want to kids to have a good time. They should be able to enjoy their time here,” Young said.