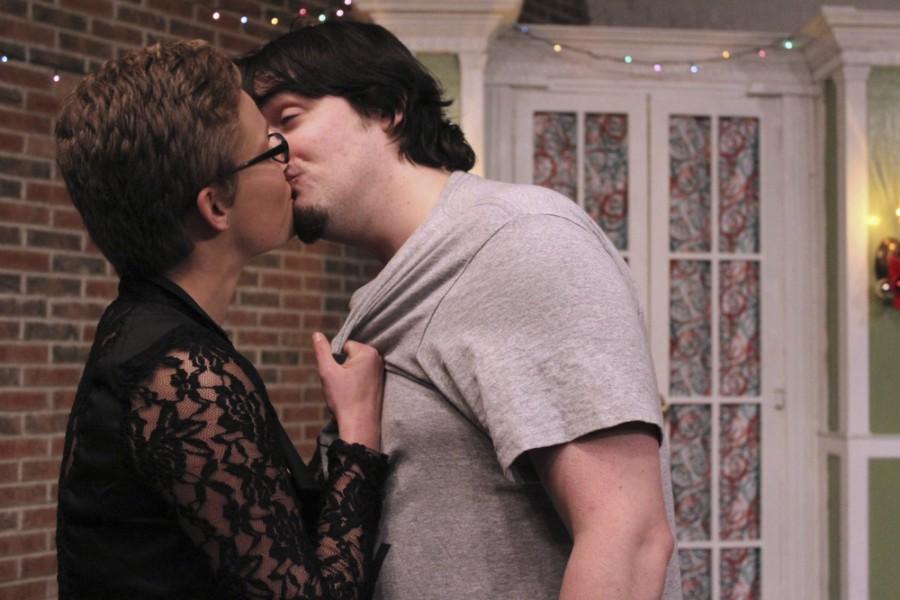 Breanna Hale, a freshman kinesiology and sports studies major, and Sam Kruckeberg, a Mattoon resident, share a kiss on stage as their characters Karen and Sam during the dress rehearsal Thursday for the Charleston Alley Theatre's last play of the season, Christmas Shorts.

After 25 years of performances, the Charleston Alley Theatre still produces plays enjoyed by the cast and the audience.

While the 25th year is coming to a close, members of the Charleston Alley Theatre, said they liked being able to be part of the shows this year.

Leah Piescinski, a Charleston resident playing Joan in one of the Christmas shorts, said its very exciting to be part of the 25th year of the CAT.

Piescinski started working with the CAT in 2013 and has been in different plays since she started.

“It feels good to be a company member. It feels like a second home, and you can just walk into the theatre and the owners will hug you and say ‘we missed you’ and it’s a really exciting time for them,” Piescinski said.

She also said its fun to be able to come back when she is not in a show and cheer on the other people she has worked with while they are on stage.

Breanna Hale, a freshman kinesiology and sports studies major, said she likes that the theatre is successful and cute.

“I think it’s so cool how this place is such a small theatre but you can tell that it’s been really successful,” Hale said.

Sam Kruckeberg, a Mattoon resident with different roles in the production, said his brother was part of the theatre in the late ‘90s and that this was his first show he has done with the CAT.

“There are familial ties here for me in spirit already,” Kruckeberg said. “I always wanted to come back to the CAT and it definitely means a lot to be part of the performance in the 25th year.”

Demetrius Johnson, a Charleston resident, said he liked that new people are still coming to the CAT.

“I think that it’s a big thing that after 25 years they have a lot of new people coming in,” Johnson said.

Johnson said he hopes that over the next couple of years more people will come through the CAT.

Sarah Rundles, a Mattoon resident playing multiple roles in the production, said that she loves the people she has met while she has been at the theatre.

“Everybody here has really been warm and friendly and it’s like a family,” Rundles said. “Whenever you’re new they just take you under their wing.”

Kruckeberg said he likes the family aspect of the theatre and that the CAT is “a place where you can be more like yourself than you get to be in other areas of your life.”

The cast members agreed with what Kruckeberg said and said the CAT is a fun place with a creative outlet as well.

Piescinski said Duke and Linda Bagger are like second parents to her during her time at the CAT, while having Duke Bagger as a teacher at Lake Land.

Johnson said being at the CAT is a good experience.

“It’s like being thrown into a hurricane, spit out the other end, and thinking ‘what just happened’,” Johnson said.

The CAT evolved from a group of professionals to working with interns who may take over the theatre in the future, Duke Bagger, a member of the CAT board of directors, said.

“We’ve been at this for 25 years and it takes a long time to come up with the skills as to how to run this place,” Duke Bagger said. “For the CAT to have a future we need to have young people come along who can fill into the places as the older members leave.”

According to Duke Bagger, the theatre started an intern council to ensure that the CAT has a future.

Amanda Wolf, member of the intern council, was the lead director of the play with her husband, Kent Wolf, as the assistant director.

Amanda Wolf said she had found the script synopsis and thought the production would be a cute, family oriented play before she got and read the script.

Amanda Wolf said she read the script and thought it was hilarious and when she came across the first bad word that they could cover it up before she saw the rest.

“It’s good humor for adults, but not so much for the little ones,” Amanda Wolf said. “We had to kind of change our plan a little bit.

Amanda Wolf said she liked the idea, and wanted to do a couple of short stories as a production rather than one long production.

She also said that she liked listening to her cast when they would go off script and have fun.

Piescinski said Amanda and Kent Wolf are fun to work with.

“They just make rehearsals fun and they make the show fun,” Piescinski said.