‘This is EIU’ tries to push for understanding 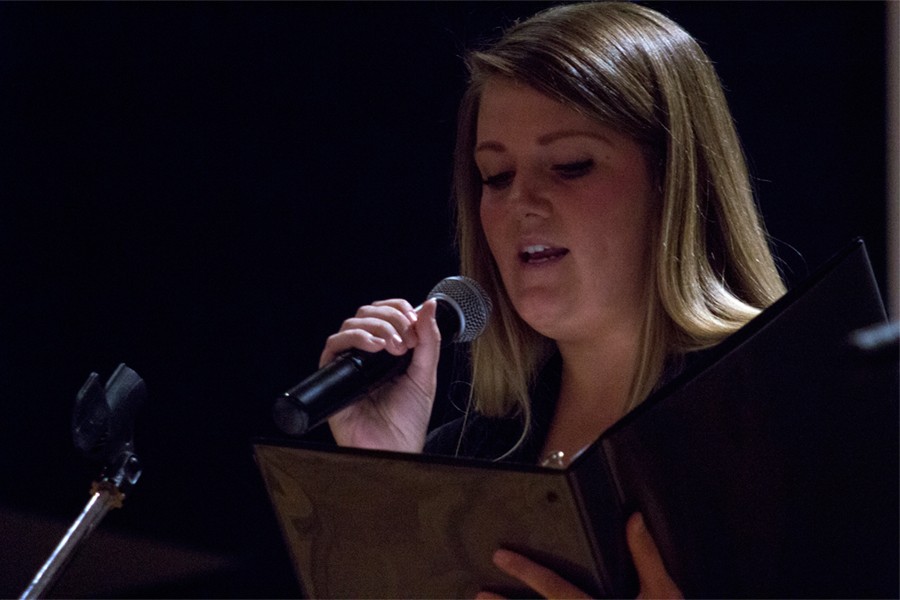 Mackenzie Buob, a senior communications studies major, recites responses from Eastern students and Charleston community members with the prompt ‘This is EIU…’ during the This is EIU: Layered Stories of Community, Its Challenges and Its Potential on Wednesday in the Grand Ballroom of the Martin Luther King Jr., University Union.

A group of 10 students stood on stage as they recited the voices of the Eastern and Charleston community.

These students were given the task of interviews members of the Charleston and Eastern community by three professors for a class. With the quotes given by residents, students, faculty and staff, they formed a combined script and created a story through the voices of the community.

The students acted as narrators and each spoke, but the stories were woven together by a given topic. The topics were what Eastern is, the university’s challenges and the potential it has to be.

After the students told their stories, they called attention to the issues in the community. A Prezi presentation was given which displayed pictures of students, events, organizations around campus and screenshots of comments on social media.

After the presentation, the audience members were asked to conduct table discussions. The audience was asked to not talk around the issue, instead speak directly on any problematic matters.

Throughout the room were student led discussions and at one table the question of how people felt about the comments on social media.

Ariel Taylor, a freshman family and consumer science major, said she was from Chicago and many misconceptions follow the city.

“It’s not like we get shot just from walking down the street,” Taylor said. “It’s areas in Chicago that are peaceful.”

Shania Williams, a freshman nursing major, said she relates to the misconceptions of Chicago. She said often people take what they see on social media and run with it.

“ People never hear the positive, it kind of gets overshadowed by the negative,” Williams said.

The conversation fell into how people feel about the safety on campus. The question of do people carry things like pepper spray to feel protected was presented.

Jeannie Ludlow, the coordinator of Women’s Studies, said often it depends on the person when it comes to safety.

“Safety in our society is connected to privilege,” Ludlow said. “ I get to moved through this world with protection.”

Another section of comments in the video was following the Wal-Mart incident and some of the students at the table said their reaction to the words.

Lamarcus Cotton, a senior communication studies major, said sometimes racism in the community can be covert.

“They probably won’t make it known that they look at you differently, but they do,” Cotton said.

The group was asked how interaction in class is for them. Cotton said he has worked with different groups in class and said he does not want to continuously prove himself as a group member.

“ I don’t want to be just another black guy in the group,” Cotton said.

He said while observing he heard topics like covert racism, preconceived notions and people being set in bad habits come up. He said the event was just a step toward something bigger.

Hillary Fuller a senior communication studies and creative writing major presented an original piece to the audience about how it takes many people to help raise someone. She connected this to how it applied to her.

“It was time for the village to raise the child, or in this case a community to raise a student,” Fuller said.

“We are Charleston and Charleston is us, no matter if we like it or not,” Brown said. “I do think this community lacks understanding of a lot of ethnic students because they are not asking the questions it takes to know that student.”

Brown said everyone needs to be heard in order for effective communication to happen.

“If you silence the voices of the majority we can’t get anything accomplished,” Brown said. “If we are able to show them they have a voice and they’re included we can move forward, it goes both ways.”

The theme of the night seemed to be Charleston and Eastern are one in the same.