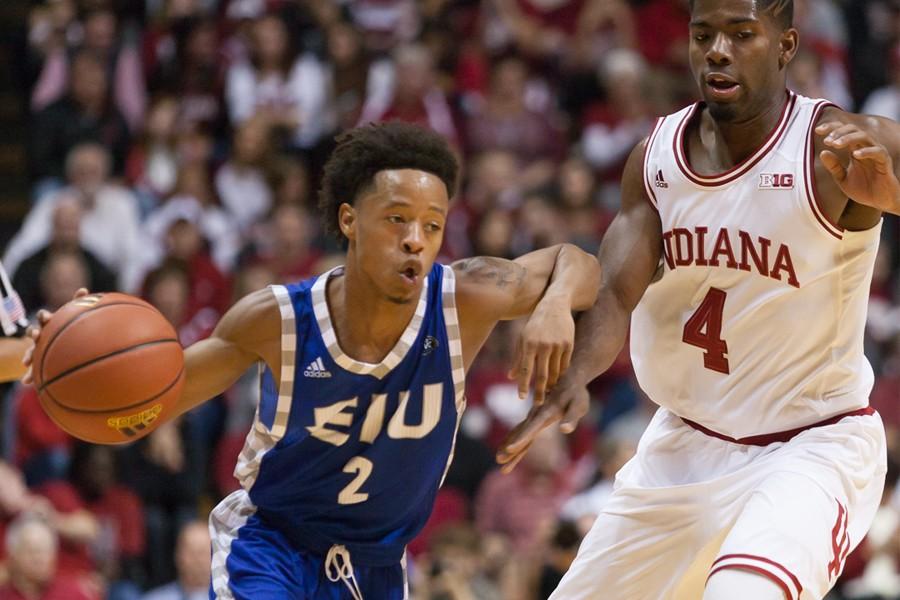 Sophomore guard Cornell Johnston is currently shooting 25 percent from the arch and has scored 25 points so far this season with the Panthers.

Its record might be 0-4 but coach Jay Spoonhour said that he is not worried about the way the Eastern men’s basketball team has played recently.

The Panthers host Indiana State in the third of a four game home stand, a stretch in which Spoonhour said that they showed improvement in each game. But stretches of poor play have doomed the Panthers recently, something that Spoonhour wants to eliminate.

“The stretches of poor play cannot last as long as some of them have been,” Spoonhour said. “The guys recognize and are fighting it. It’s a process you’ve got to go through to win some games.”

The Sycamores will come to Lantz Arena on Tuesday with a 3-2 record, winning two games at the ParadiseJam.com Tournament in the Virgin Islands. Eastern defeated the Sycamores last year in Terre Haute by a score of 60-56.

“It was just effort and going after it,” Anderson said. “I wasn’t giving as much effort the last few games.”

Spoonhour was happy with the way junior guard Demetrius McReynolds played. The junior transfer scored 12 points and grabbed 11 rebounds for his first double-double as a Panther. McReynolds said he was trying to think less against Green Bay.

“I just had a better feel for the game and came out more aggressive,” McReynolds said. “Personally I feel like I was thinking too much (first few games). That’s what messed me up.”

For the Panthers to continue improving, Spoonhour said that it has to show mostly on defense.

“We’ve got to consistently doing things like get rebounds and get back on defense well,” Spoonhour said. “We started off playing well in spurts last year, then halves and more later on. Right now we’re getting closer to playing the way we did.”

Opponents have scored an average of 81.2 points against the Panthers’ defense and shot for a .471 shooting percentage. Eastern’s opponents have also outrebounded them 179-119, and average 44.8 boards per game. Indiana State has averaged 39 boards per game thus far.

Anderson has compiled 50 points and 10 rebounds, which ranks second and fourth for the Panthers, respectively. Anderson said Eastern needs to show more consistency on defense, particularly with guarding.

“Right now the error for us is defense,” Anderson said. “We’ve given up a lot of points and just have to do a better job of containing our man.”

Eastern began the 2014-15 season losing four of the first five games, but entered this season with media predicting they would finish third in the OVC’s west division. McReynolds said that Spoonhour has been urging the Panthers to keep their composure.

“Coach has really been helping us out,” McReynolds said. “He tells us to work hard in practice and get better everyday.”

Tipoff is set for 7 p.m. Tuesday at Lantz Arena.