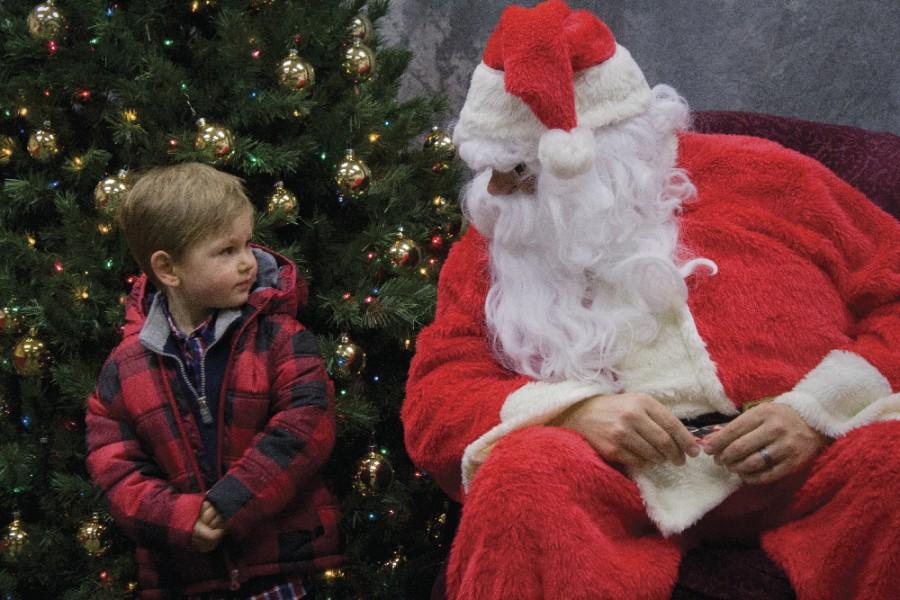 2-year-old Dean Hazelrigg, whose father Todd Hazelrigg is a junior physics major, stands next to Santa for a picture last Saturday at the Festival of Trees.

The Festival of Trees is a family-friendly event, with Santa Claus there to greet the children. As the children came into the room to meet Santa, they were greeted by his elves. Kids were able to have cookies with Santa and sit on his lap for a quick photo. While they were with Santa, the children also read some holiday stories.

One of the people who attended the event, Matt Jones, a Charleston resident, said he and his family have come to the festival every year for the past five years.

“We are here to see Santa,” Jones said. “I always enjoy coming because it gets me in the mood of the season.”

While the children had their fun with Santa and face painting, there were things for adults to do too. Adults could enjoy many of the decorated trees that were featured at the event.

As people walked through an aisle of trees and into a room of Christmas items, they were greeted by the smiles of the Sarah Bush Lincoln employees and volunteers while piano music played in the background.

All of the 30 featured trees were decorated with a variety of themes ranging from Minions from the film “Despicable Me” to a construction themed tree entitled “Constructing Hope.” Each tree was also auctioned off in a live auction at the Saturday night gala.

However, those who attended the Festival of Trees did not have to wait until Saturday night to get trees or other items.

The event also included a silent auction for the 4-foot tall trees and the centerpieces throughout Friday and Saturday.

There was also a cash-and-carry option on items such as 2-foot tall trees and wreaths designed by Sarah Bush Lincoln employees and volunteers.  Other holiday decorations were offered at the Merry Marketplace.

The Festival of Trees also had one special tree, the Lincolnland Hospice Memory Star Tree, which people could dedicate in memory of loved ones they have lost.

People were able to pay to receive an engraved Memory Star with their loved one’s name on it. The star could remain hanging on the Memory tree once he event was over, the stars could be taken home for their families to hang on their tree.

The stars can be returned to the foundation’s office to be used again the next year.

Martha Wheeler, a Coles County resident, said she came out to the event to see all of the trees.

“We brought my great-granddaughter out and I wanted to come because I had never been,” Wheeler said.

All of the proceeds from the event went to benefit the Sarah Bush Lincoln Cancer Center.