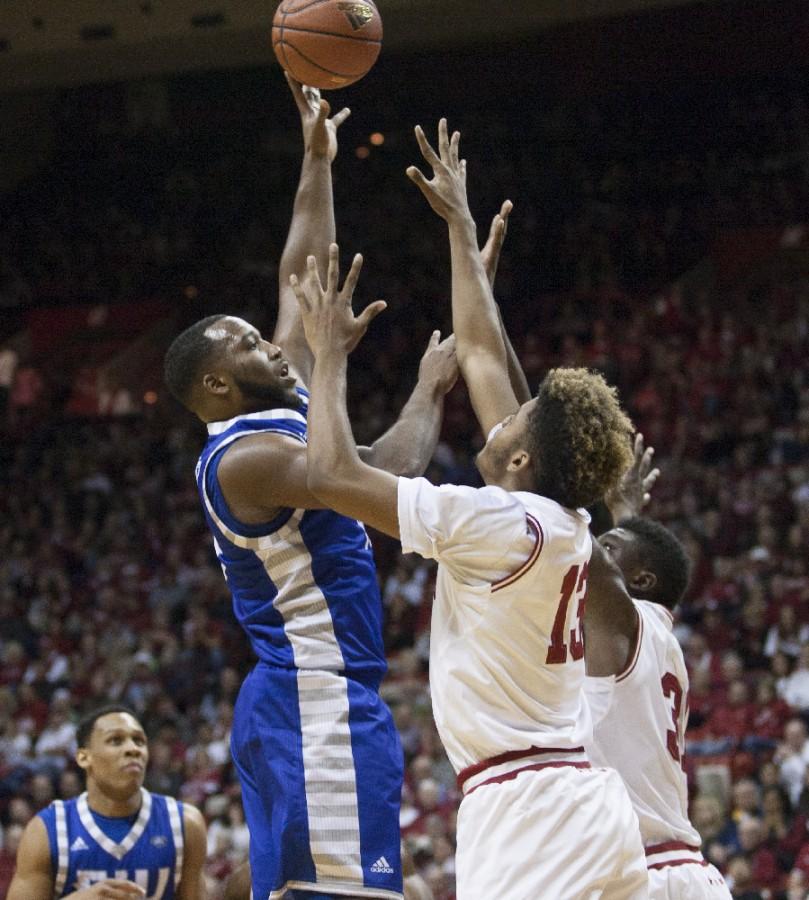 Senior wing Trae Anderson is currently 10-22 in field goals and has 32 points so far with the Panthers.

Eastern will be the site of a rare doubleheader on Saturday. Following the football game, the Eastern men’s basketball team will host Western Illinois in its regular season home opener at 7 p.m. at Lantz Arena.

The Panthers are coming off an 0-2 road trip in Indiana in the last week. They were defeated by Indiana and Ball State, but will return home for a four-game home stand for the next three weeks.

The Leathernecks are 3-0 to start the season, which began with a 69-67 over the defending national runner-up Wisconsin.  Eastern coach Jay Spoonhour said that Western has been efficient, offensively, in the first few games.

“They had two guys score against Wisconsin,” Spoonhour said. “What they did was play real efficient and tough.”

Senior guard J.C. Fuller, who averages 17.3 points per game, is the Leathernecks’ leading scorer. Fuller had a season-high 20 points at Wisconsin last week.

Eastern has been outrebounded in the first two games. Indiana defeated Eastern 51-17 on the board battles in the opener, while the Cardinals picked up 43 to Eastern’s 32. Spoonhour said that the Leathernecks anticipate putting up second chance points because of Eastern’s rebounding woes.

“When you look at us, you can think you can get second chances, and Western will think the exact same thing,” Spoonhour said. “Until you prove to other people that they can’t get second shots on us, they will keep doing it.”

Western is averaging 39.3 rebounds per game, and will face an Eastern team that averages 52.5 points per game.

Junior transfer A.J. Riley has been the Panthers’ leading scorer each of the first two games. He scored 21 points in Monday’s loss at Ball State.

Senior forward Trae Anderson totaled 20 points on Monday, and picked up two rebounds. Riley and Anderson were the only players to reach double-figure scoring. Spoonhour said he was pleased with Riley’s performance, but wants him to adapt his game.

“He’s always been able to take it and go by people,” Spoonhour said. “You cannot throw one pass and drive it from the point, and think you are going to lay it in. He’s just got to learn when to make a play.”

Even though Spoonhour is pleased with Riley’s performance the first few games, he says that veteran players need to step up. But he said there are still some things that are new to them, similar to what the newcomers go through.

“I overlook this sometimes. But with the returning guys, there is a lot of new stuff to them,” Spoonhour said. “There are things you’re asking T (point guard Cornell Johnston) to do that he didn’t have to last year. Now he’s got a new set of expectations and wants to do well. “

Johnston, an All-OVC preseason selection, has averaged four points per game and three assists through the first two games.

Tipoff is set for 7 p.m. on Saturday. Any fan that brings in a ticket from the football game will get free admission.