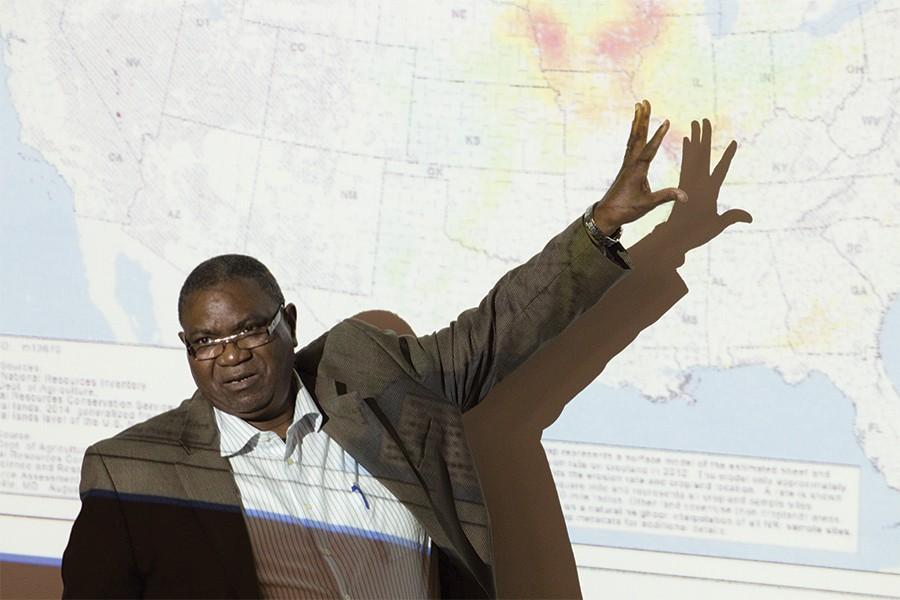 Francis Odemerho, from the Department of Geography at Southern Illinois University-Edwardsville, presented his findings on soil erosion.

Odemerho is a geographer who is originally from Nigeria. He is a physical geographer as well as a fluvial geomorphologist, meaning that he works with water and how the land has evolved on the earth.

Odemerho said when he talks about the topic of soil erosion, he uses a lot of maps; he said maps help people figure out locations, which are important in geography.

“Location is very important, you use the map to show where physical and human elements are located,” Odemerho.

He said when talking about erosion, people had to understand location.

Odemerho used various maps to explain and show how soil erosion has changed from 2000 to 2014.

Soil till and sheet erosion in the United States has declined by about 44 percent, said Odemerho. He said the rate of erosion in the country as a whole is declining and has been since 1995.

Odemerho said the decline of erosion could be attributed to an increase in Illinois using no-till farming techniques.

“No-till” farming techniques increase the amount of water that goes into the soil and increases organic matter and nutrients in the soil.

Odemerho said it was important to look at these changes that are happening.

“You can see a great change in the cropping system,” said Odemerho.

The three crop rotation of corn, soybeans and wheat that have also helped to prevent erosion.

“The purpose of the week is to make our citizens, our people, our students and the members of the community more aware of geography and places and international connections,” Khan said.

Khan said this awareness is essential to the internationally connected civilization we live in.

“We have been very fortunate to have departmental chairs from the past and now for this program,” Khan said. “We do get some grants from the college of sciences and university.”

There is also an honors organization called Gamma Theta Upsilon that helps with National Geography Awareness week as well.

The next event for National Geography Awareness is another lecture by Thomas Pingel, from the geography department at Northern Illinois University.

Pingel will be presenting “Bonemapping: A LIDAR Processing and Visualization Approach and Its Applications” at 7 p.m. Tuesday in room 3040 of the Physical sciences building.

The lecture is open to students, staff, faculty, and community members.