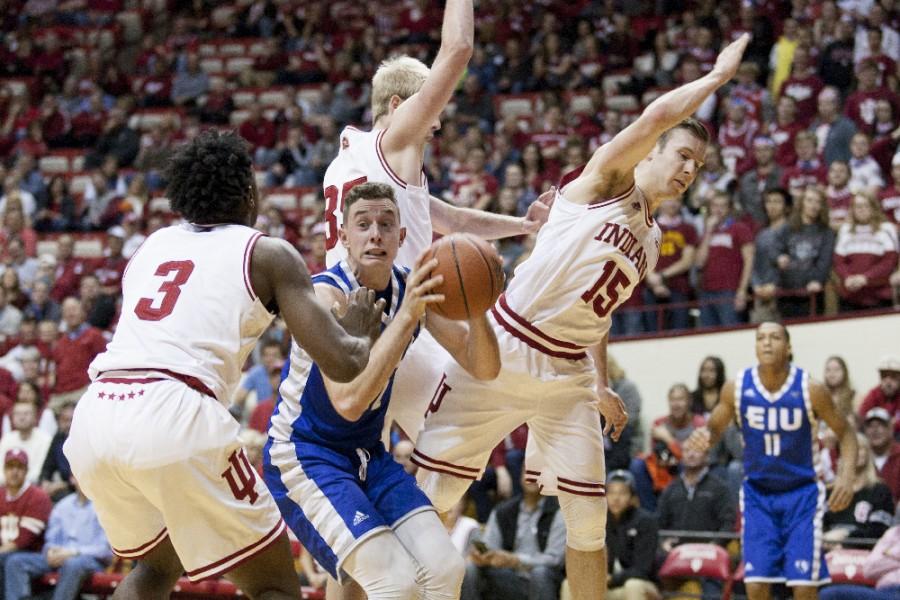 Freshman forward Patrick Muldoon goes up for a shot surrounded by Hoosiers during the Panthers' 88-49 loss to Indiana on Friday in Bloomington, Ind.

Bloomington, Ind. — The Eastern men’s basketball team (0-1) was no match for Indiana University (1-0) as the Panthers dropped their first regular season game 88-49 to the nation’s pre-season nationally ranked No. 15 Hoosiers.

Indiana outrebounded Eastern 51-17 in what was already a runaway game for the Hoosiers by end of the first half.

The halftime score read 49-17 after junior forward Troy Williams put in a pair of free throws capping off a 27-3 scoring run for Indiana.

Eastern head coach Jay Spoonhour said the Panthers were fully aware of the challenges they might face going into the Assembly Hall in Bloomington, Ind.

The Panthers were outsized in most of their matchups on the floor, but were still able to force more turnovers than the Hoosiers with 16.

Senior forward Trae Anderson said he felt like his Eastern teammates did the right things, but just did not do those things good enough, allowing five Indiana players to grab seven or more rebounds.

“We knew coming in they were a good rebounding team,” Anderson said.  “But a lot of times when you’re boxing guys out that are just taller and they smack it back out.”

6’10” freshman center Thomas Bryant led all Hoosiers with nine rebounds including five offensive rebounds and finished the game with 11 points in his collegiate debut.

“It’s not like when we scheduled the game we didn’t know what we were getting into. We knew what we were doing,” Spoonhour said. “It’s really disheartening for your team when you’re out there and guys are trying to block out and get guys off the boards but when you don’t get it done. When you bust your tail and then don’t complete the stop and they get it and score, it’s a killer.”

The Panthers had a hopeful start, leading the Hoosiers by three less than two minutes into the game, but were plagued by early foul trouble as Anderson picked up his second foul with more than 10 minutes to go in the first half.

Anderson was a second team All-Ohio Valley Conference player last year leading the Panthers with 13.1 points per game. He finished the game with 12 points.

“It’s pretty tough. You’ve just got to play through it. That’s just basketball.”

“The refs are gonna call what they’re gonna call,” Anderson said. “They’re not gonna see every call so you’ve just got to play through it.”

Spoonhour said going into the season he expects to run into adversity and he expects guys on his team to “kind of lose their poise.”

With early fouls, Indiana spent much of the first half in the double-bonus shooting two free throws for every Eastern personal foul.

“The guys that we were really needing to pull us together, the guys that can make plays were on the bench,” Spoonhour said.

Junior guard A.J. Riley, a junior college transfer, was put into the starting lineup for the Panthers and led them with 13 points and five rebounds while knocking down all six of his free throws.

Spoonhour said he thought Riley might benefit from sitting and watching to start the game, but ultimately decided against that.

“I knew that (Riley) was going to be one shot at some offense early in the game and I didn’t want them to jump out on us 10 to nothing or 12 to nothing,” he said.  “Riley’s a good player, and he’ll figure stuff out more as he goes.”

Anderson gave credit to Indiana, saying they played pretty good. He said he did not feel like he and his teammates came out aggressive enough and let the sold out Indiana crowd of more than 17,000 affect them too much.

Down the stretch, Eastern kept up with Indiana only being outscored by seven in the second half, but still gave up a total of 35 bench points from the Hoosier bench.

He said he knows what it is like being on the other side of a large point margin, saying it is difficult to maintain concentration after getting a big lead.

“They play hard throughout. It was impressive I thought,” Spoonhour said. “If you get beat as bad as we did and you’re not impressed then you need to go for an examination.”

Indiana’s sophomore guard James Blackmon Jr. led all scorers with 17 points while shooting 7-of-13 from the floor.

The Hoosiers made over half of their shots and knocked down nine from behind the three-point line.

Anderson said he feels like this game will bring the Panthers closer together as a unit.

“We’ve got to find out what we need to do in order for us to win games like this,” he said.  “We’re going to work hard together and play together.”

Eastern tips off again at 6 p.m. Monday in Muncie, Ind. matching up with Ball State University (0-1).