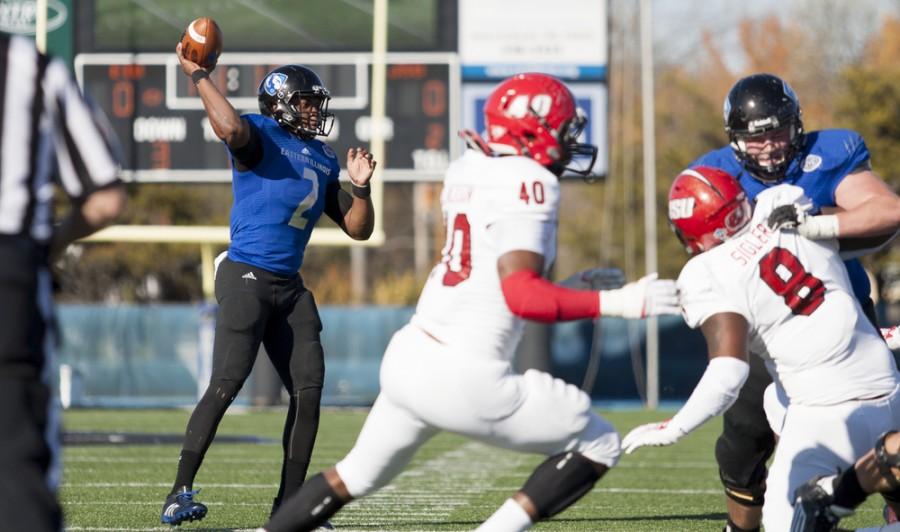 Senior quarterback Jalen Whitlow threw six passes for 55 yards and rushed 81 yards during the Panthers' 24-3 loss to Jacksonville State on Nov. 7 at O'Brien Field. The Panthers Tennessee-Martin 23-21 in Martin, Tenn. Whitlow ran for 142 yards and passed for 80 yards during the game.

A total of four forced turnovers by the Eastern defense on Saturday led to a 23-21 victory at Tennessee-Martin. Three of them came by way of interception, off of quarterback Jarod Neal, who is among the leaders in the Ohio Valley Conference in every passing category.

One interception was returned for a touchdown, after Eastern red-shirt senior Dino Fanti deflected a pass to senior defensive end Thomas Coronado. Fanti broke through the line as the Skyhawks were setting up for a screen, and deflected the ball as he hit Neal. Coronado, who fought through the screen, returned it 45 yards to the end zone, to make it a 23-15 Eastern lead.

Fanti wasn’t done making plays in the fourth quarter. Following a touchdown run by UT-Martin’s Ladevin Fair, the Skyhawks were forced to go for two to tie the game at 23. After taking the snap, Neal scrambled in the pocket, and was brought down by Fanti for a sack. But still there was still 4:51 left in the game.

Fanti finished the game with seven tackles, including 2.5 for loss and one sack.

The Panthers’ offense was unable to pick up a first down on the next drive and freshman punter Mike Bernier was called on to punt. Bernier pinned the Skyhawks at their own 11-yard line with a 48-yard punt.

Neal overthrew his intended receiver on the first play of the drive and safety Jourdan Wickliffe dove for the ball, which was about to hit the turf. Wickliffe came up off the ground celebrating, and it looked like the Panthers would be able to leave Martin with a 23-21 victory.

The officials met to discuss whether Wickliffe had possession, and the original call was not overturned. Three running plays later, and the Panthers improved their OVC record to 6-1, with another important matchup against Eastern Kentucky next week.

Offensively the Panthers struggled with their passing game, but senior quarterback Jalen Whitlow found another way to get the Panthers offense down the field. Whitlow rushed for 142 yards on 13 carries, and broke free for a 42-yard run to the UT-Martin 33-yard line.

Eastern outrushed UT-Martin 196-81 and scored two rushing touchdowns in the first half. Red-shirt senior Shepard Little and red-shirt junior Devin Church scored on five and two-yard runs, respectively. Eastern was two-of-three in the red zone, while the Skyhawks were three-of-five.

On one of those red zone trips, the Skyhawks had the ball on the two-yard line, but Neal threw an interception in the end zone to sophomore defensive back Bradley Dewberry. A bad snap over Whitlow’s head on the next drive, resulted in a safety for the Skyhawks.

But the Skyhawks’ defense wasn’t the only the one to record a safety. Red-shirt senior cornerback Antoine Johnson blocked a punt into the back of the end zone to give Eastern two points, and a 9-3 lead.

Neal came into the game averaging 312.1 yards per game, and finished with nearly the same numbers. He threw for 322 yards and one touchdown, while completing 30-of-49 passes. His counterpart, Whitlow, completed 8-of-18 passes for 80 yards and two interceptions.

The win puts the Panthers in good position for a playoff berth. Next week’s opponent Eastern Kentucky has lost two OVC games this year, to both UT-Martin and OVC champion Jacksonville State. A victory by the Panthers on Senior Day, would give them a 7-4 overall record and 7-1 in OVC play.

There’s no guarantee that the Panthers will make the playoffs with the win, but coach Kim Dameron said two weeks ago that a 2-0 finish would bode well for FCS playoff aspirations.

“We’ve got to win the next two, and I don’t know if style points matter,” Dameron said. “But winning the last two would feel good for us.”

Kickoff for that game is at 1 p.m. Saturday at O’Brien Field.