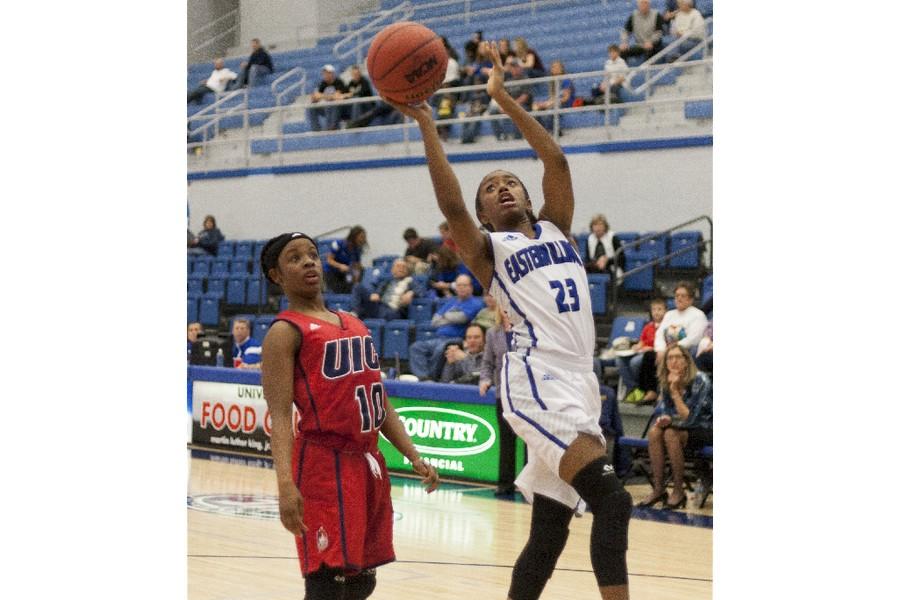 Red-shirt senior Shakita Cox attempts a shot during the Panthers' 78-66 loss against Illinois-Chicago on Dec. 14, 2014 at Lantz Arena.

The Eastern women’s basketball team will start its season at home against Indiana University-Purdue University Indianapolis Friday and will play on the road at Memphis Sunday.

Coach Debbie Black said her team is entering game ready with their own game plan and will wait to see what their opponents have to offer.

“It’s really going to be about us,” Black said. “We don’t know much about our opponents. We’re just prepared to play well on both sides of the ball.”

Eastern will compete with just two seniors this season, guard Shakita Cox and guard Alece Shumpert, after three players graduated at the end of last season.

Black said she wants her team to execute the offensive end and show consistency when scoring.

Eastern averaged 59.3 points per game and went 41.3 percent from the field last season.

Black said she would like to see energy from her defense in order to keeps things manageable when they are on offense.

The starting lineup, according to Black, will have sophomore guard Grace Lennox and junior forward Erica Brown in it. The rest of the lineup is still a game time decision.

Last season, Eastern committed 18 turnovers per game compared to opponents only committing 14.6 against them.

“That’s a big task for a young team,” Black said. “They just need to work together and play hard.”

Black said her team is excited to get the season underway, but there are some nerves to go along with that.

She said the months of practice couldn’t prepare a player the way actually playing competitively in a game can.

“Everyone is really excited,” Black said. “We’ve been waiting on this day for a while now and it’s almost here.”

When it came to players stepping up, Black said she expects everyone to rise to the challenge.

She said she expects particular leadership to come from her veterans.

“We’ve got a few players who’ve been here before,” Black said. “But I’m really looking forward to seeing my young players get out there.”

Eastern will get the season tipped off on Friday at 6 p.m. on their home floor against IUPUI. In their next game, they’ll visit Memphis to play their road opener.