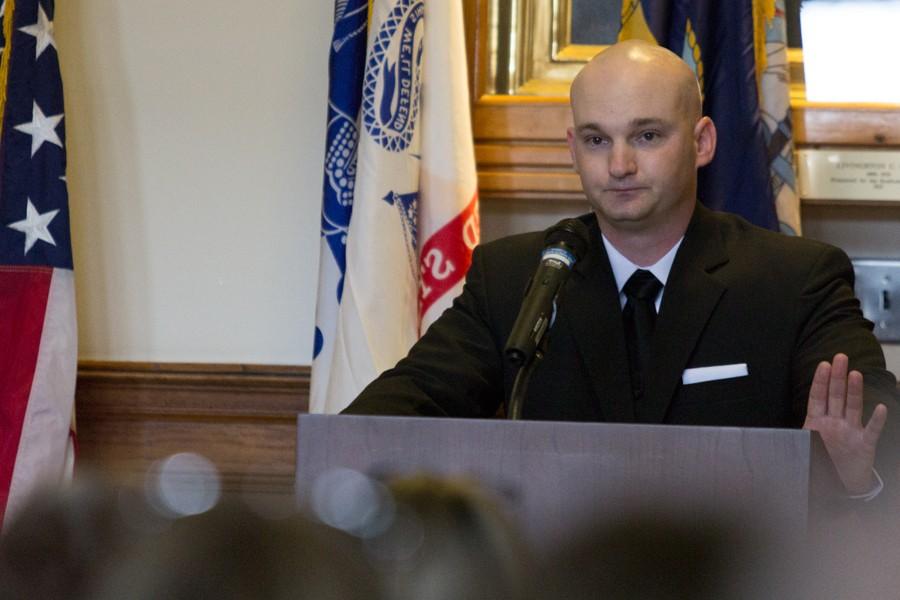 T.J. Prater, a sophomore commuication studies major and student veteran, talks about his military experience during the Veterans Day ceremony in the Cougill Foyer of Old Main on Wednesday. Prater asked those in attendance to, "find a veteran and shake their hand and say thank you."

The annual Veterans Day ceremony ended with a bang after the three volleys were fired off by the cadets of the Eastern Army ROTC Cannon Crew Wednesday morning at Old Main.

The volleys were followed by “Taps,” played by Michael Eckardt, a music major and trumpet player.

Cadet Jacob Trigleth, a junior biological sciences major, was the master of ceremonies.

Before the volleys were shot and “Taps” was played, Trigleth gave some background of their origins.

Trigleth said the three volleys originate as far back as the Roman Empire.

He said the volleys were a signal that burials were complete and the soldiers could resume the battle.

Prater talked about his experience serving over-seas in Afghanistan and how he felt when he came home.

“The day we returned from Afghanistan, one man short, but the rest came home, we stepped off the bus and received a standing ovation,” Prater said.

Prater said that they did not know the people who greeted them because they were from local communities.

“The fact that they were all willing to be there when we got home just made it nice to know that our work is valued,” Prater said.

Prater also requested that people find a veteran and thank them for their contribution and sacrifice they had made when they choose to serve.

Along with Praters remarks, Eastern President David Glassman talked more about the history of Veterans Day and gave some facts of members of the Eastern community that have served.

Glassman talked about former librarian Mary Josephine Booth, who volunteered to work for the Red Cross in France and Germany during World War I.

“As a volunteer, she paid all of her expenses including travel, boarding and lodging,” Glassman said. “She was the only faculty member to serve over-seas during World War I.”

Glassman said Eastern has a proud history of honorable members of the Eastern community.

Glassman told those in attendance about the 1941 Homecoming festivities that started with some of the male members of the freshman class who pounded on a bass drum on the rooftop of Old Main during an all-night vigil.

“The theme was, a salute to Eastern’s men in service, commemorating the student’s contribution to their country again, more than two decades later,” Glassman said.

Glassman also gave history on how Woodrow Wilson proclaimed Nov. 11th as Armistice Day, which became a national holiday every year when Congress established it in 1926.

Jim Ealy, a construction laborer for the university, said he liked Glassman’s speech during the ceremony.

“I think president Glassman had some facts that I didn’t know in his presentation,” Ealy said. “Getting a little history was nice.”

Trigleth started off the ceremony with some remarks about the flags after they were placed by the ROTC color guard.

“The flag is a symbol of history, pride, and honor,” Trigleth said. “The stars and stripes are worn by land, sea, and air.”

Flags from all of the army, marine corps, navy, air force, and coast guard were placed at the beginning of the ceremony.

Glassman, Prater, and Joshua Norman, an Eastern employee and veteran, placed the wreath at the base of the flagpole outside of Old Main.

“(The wreath will be placed) in order to symbolize Eastern’s commitment to its veterans acknowledging their service and sacrifice,” Trigleth said.

Max Balch, a carpenter for the university, said he thought the ceremony was inspirational and well done as it always is, in his opinion.

“I like the president’s speech about the history of the students, the wars and stuff throughout the years,” Balch said.