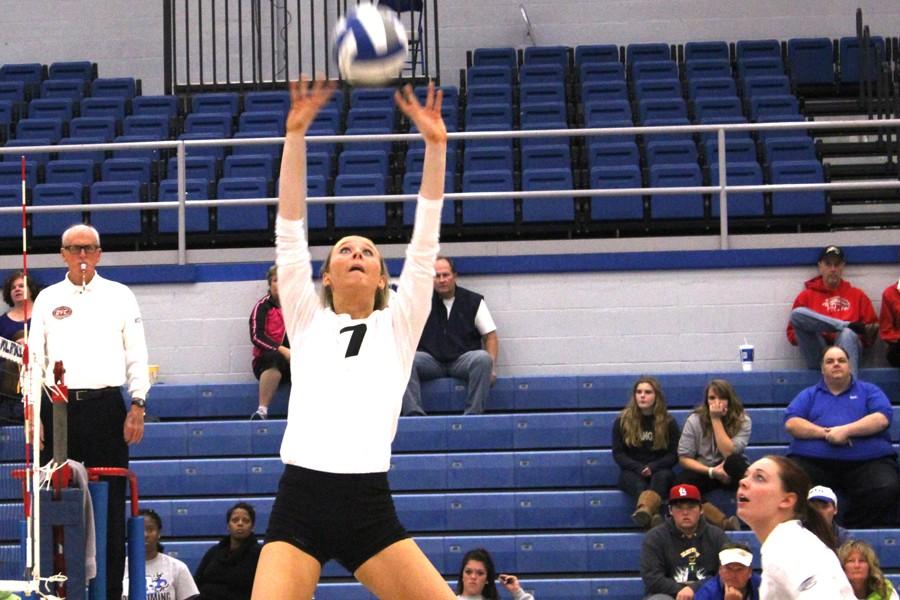 Freshman Taylor Smith sets the ball in a match against Southern Illinois Edwardsville Wednesday night in Lantz Arena. Smith had 53 assists on the night.

During the break, coach Sam Wolinski said she told the team that they would have the day off tomorrow and not practice.

Wolinski said the back row play by the Panthers helped them get the win.

Senior Wallace’s 35 digs was a new career high for her in a single match. Three other players besides Smith were also in double-digit digs. Senior Marah Bradbury had 11, freshman Anne Hughes had 10 and sophomore Maria Brown had 14.

“All around our defense was great,” Wallace said. “We were getting good touches on the block especially in the last three sets and that helps the back row tremendously.”

The Panthers also out-killed the Cougars by 14. Senior Chelsea Lee led with 23 kills, sophomore Allie Hueston had 11 and red-shirt sophomore Josie Winner had 14.

Late in the fourth set when the Panthers were trailing the Cougars 22-18, Brown helped get them back in it by getting two kills to put them within two. Hughes got the next point, but then a block by Brown got the game all tied up at 22.

Brown had eight kills in the match.

Brown said she was glad that she was able to contribute at critical points in the match to go along with Lee’s 23 kills and a talk with assistant coach Peter Green helped her get back to her game.

“A big thing with me is I drift a lot on my block so I fly past the hitter and once I’m reminded of that, coach Green will usually remind me so I just mentally tell myself ‘just go straight up and stop drifting,” Brown said.

After trading a few points, the Panthers got the final two off back-to-back errors by the Cougars.

Eastern and SIUE had different approaches to the match as SIUE is still fighting for a spot in the tournament coming in to the game in ninth place in the OVC standings, while the Panthers were looking for a strong match to be ready for the tournament next week.

“In the timeouts we were just talking about getting more energy and coming out and getting more excited because we have a place in the tournament and we have to start playing like it,” Wallace said.

The Panthers improve to 11-4 in OVC play and will play their last match of the season on Saturday in Lantz Arena.