Austin Parrish back in the pool after heart injury 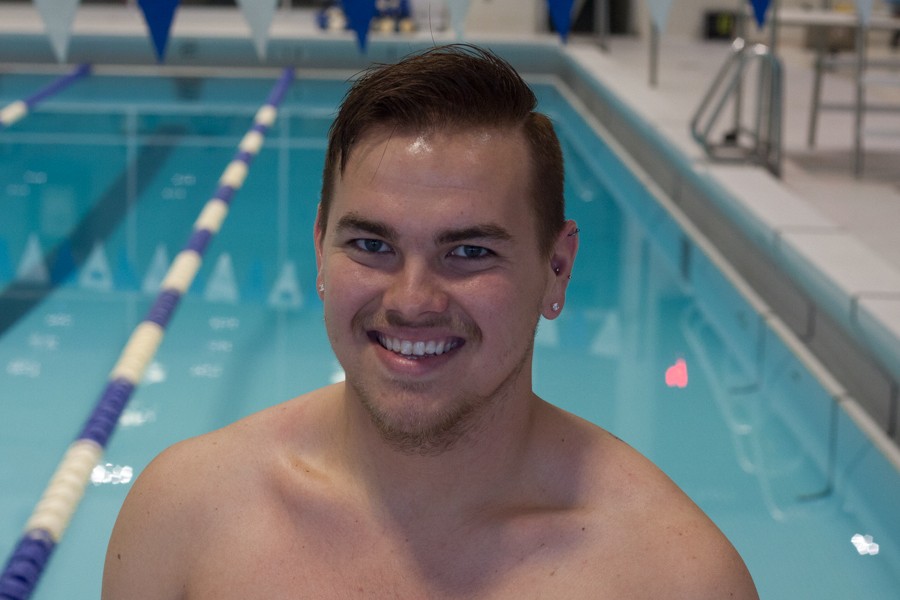 Junior Austin Parrish has made his return to the pool after a heart condition called Atrial Fibrilation. Parish has swam in two meets this year and has dropped times.

Junior Austin Parrish is a distance swimmer for the Eastern men’s swim team and is getting back into the water again for the first time since being brought to the hospital on Sept 25 for atrial fibrillation (AFib).

Atrial fibrillation is when the upper chambers in the heart quiver instead of correctly pumping blood through the body.

Parrish was just getting back to swimming after having a cyst removed from his inner thigh when the incident occurred.

He was finishing up weightlifting when he said he began feeling his heart beating irregularly.

“I just thought I got worked up, didn’t think anything of it,” Parrish said. “I knew it didn’t feel right or normal but I went home showered, had breakfast, even went to my 8 a.m.”

Later during his 9 a.m. he had some of his friends take his pulse and after a group of them agreed it wasn’t normal he decided to talk to his physical trainer.

The physical trainer and Parrish headed over to EIU Health Services where his pulse was recorded at 140 beats per minute.

Parrish was in AFib and was taken to the hospital via ambulance.

At the hospital the doctors decided the next step would be to put Parrish under anesthesia and do a transesophageal echocardiogram (TEE). This examination is much like an ultra sound and involves a hose down the patient’s throat allowing the bouncing of waves off of the heart itself to see how well the heart is working.

“They said the hose was like the size of her pinky, they whipped that hose out and it was the size of a garden hose outside,” Parrish said.

While under anesthesia the doctors re-synced his heart by shocking it back into rhythm.

“When I woke up I felt perfectly fine again, I wasn’t in AFib,” Parrish said.

A month later, after a follow up visit with his doctor, he was released to ease himself back into swimming.

Parrish said he first began with a 20-minute practice to begin getting back into shape and now is practicing for nearly the entire two-hour practice with no complications.

“Going back into practices has been rough just because I’ve been out for so long,” Parrish said. “I feel a bit out of shape and I’m not where I want to be. It’s been a rough junior year.”

Parrish said that he admitted to feeling uneasy about his upcoming House of Champions meet at Indiana-Purdue University Indianapolis where he will be competing in his usual distance events.

He said he knows he will be hard on himself but is trying to make himself aware that he was out for a medical issue that was out of his control.

“There are other organs you can live without like your kidney and pieces of your liver, but you only get one heart so when it does come to the heart you take it seriously or else you might not be here the next day,” Parrish said.

He said he has not considered giving up swimming even though he is now at a higher risk for AFib because of his previous incident.

“My goal to finish four years of being a NCAA Division 1 athlete and the team here is what’s kept me going after being out instead of throwing in the towel and calling it quits,” Parrish said. “I still have that drive and passion. I still have goals I want to meet and times I want to get to before it’s all over.”

He said coach Jacqueline Michalski was with him every step of the way and was very supportive.

“We took time to figure out was exactly wrong,” Michalski said. “It’s been a very slow progression in but it’s been what the doctors and athletic trainers really suggested.”

Parrish has only swam in two meets this year and has improved his times in both.

“I have full confidence he’ll get to where he needs to go before the end of the semester,” Michalski said.

Not only did he have his coach by his side but he also said that there was never a moment when a swim team member was not checking up on him or asking if he needed anything at all.

The doctors do not know what caused the heart problem so for now Parrish said it is like a trial an error period. He will continue to swim, take his inhaler for asthma, go to class and live hoping it never happens again but now looking out for possible triggers if it does.

If AFib happens again to Parrish within this year he said he will need to have a surgery to correct the issue and will discontinue his swim career of 16+ years.

Ironically, one of his future possible career paths includes being a cardiothoracic surgeon.

Cheyenne Fitzgerald can be reached at 581-2812 or [email protected]