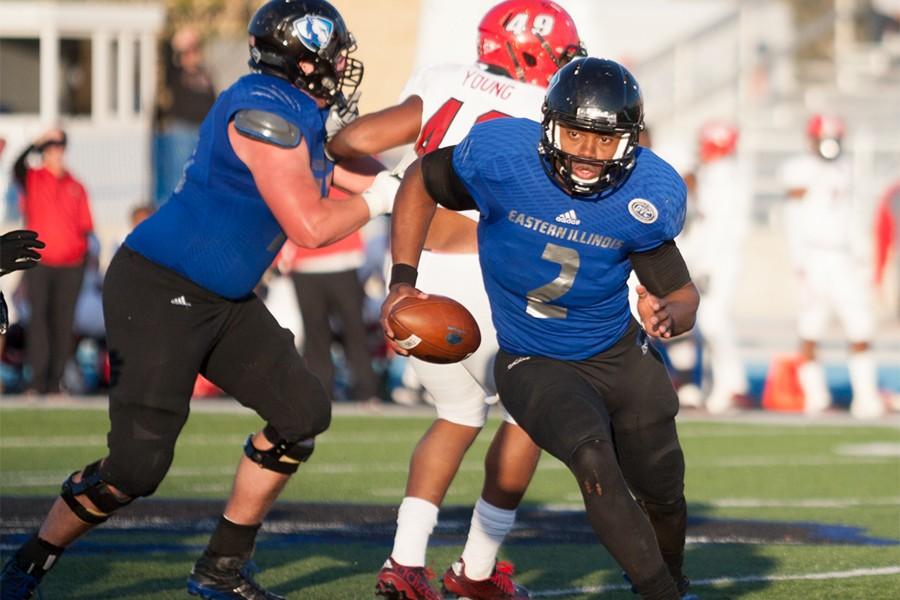 While Saturday’s loss to Jacksonville State may have made postseason hopes slimmer, the Eastern football team still has an outside shot of making it to the FCS playoffs. All the Panthers have to do is win their last two games, and their future will be at the mercy of the NCAA playoff selection committee.

This week’s opponent, Tennessee-Martin, has one of the Ohio Valley Conference’s best offenses, which includes quarterback Jarod Neal. The Skyhawks’ offense averages 39.7 points per game, which is the best in the conference, and even higher than Jacksonville State’s 37.2 per game.

Neal has thrown for 19 touchdowns this season, and averages 310.5 yards per game. He completed 24-of-51 passes at Eastern Kentucky Saturday, for a total of 358 yards and three touchdowns in the 42-35 victory.

“They’ve got a heck of an offense down there,” Eastern coach Kim Dameron said. “They’ve scored points on everybody this year, so we’ve got to do a great job for us to have any chance to continue later on in postseason.”

The Skyhawks are currently 6-3 overall this season, and 5-1 in the OVC, which is the same record as the Panthers. Both teams suffered their lone conference defeat at the hands of the Gamecocks, who are unbeaten in OVC play.

Whereas Eastern struggled to get its offense rolling on Saturday, the Skyhawks ended up in a shoot out with No. 1 ranked Jacksonville State. Neal connected with wide receiver Rod Wright for two of his three touchdowns that game, bringing his team back from a 48-20 deficit.

The Gamecocks would win that game 48-41.

Neal, Wright and the rest of the Skyhawks’ offense will have their own obstacle to overcome on Saturday. The Panthers’ passing defense has held opponents to an average of 180.5 yards per game and six touchdowns, which is second-best in the OVC behind Jacksonville State.

“I was impressed with the way Antoine played (Saturday),” Eastern senior linebacker Kamu Grugier-Hill said. “He had a good game and it kind of paid off.”

If the Panthers get a win at UT-Martin, it’ll make the last game against Eastern Kentucky even more important. The Colonels have already lost two games in OVC play to UT-Martin and Jacksonville State.

If it’s a three-way tie between those schools, Eastern should get more playoff consideration considering they defeated both their opponents in two weeks.

“I’m a junior, but I’m going to be playing my ass off for these seniors,” junior linebacker Seth McDonald said. “Just do everything I can.”

As for the OVC championship, it is the Gamecocks to lose. The Gamecocks end their season against Southeast Missouri and Murray State at home. Since the 33-28 victory over the Redhawks on family weekend, Dameron said that he thought they’d pull off an upset later in the year.

“They’ll jump up and beat somebody big down the road,” Dameron said.

The Redhawks will play UT-Martin to close out the season.