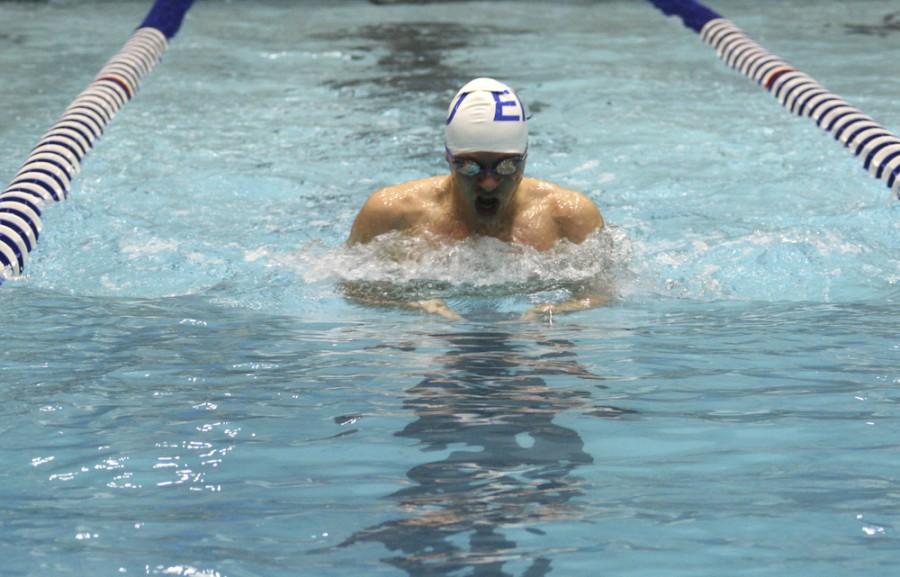 Brandon Robbins swims breaststroke during the 400-yard medley relay on Saturday during Eastern vs. Valparaiso at Padovan Pool. The relay took first, finishing with the time 3:34.68.

The Eastern men’s and women’s swim teams defeated Valparaiso by placing in first in 15 out of a combined 22 events.

Coach Jacqueline Michalski said coming in the Panthers knew that they would have the advantage in the endurance-based races.

Both the men and women started the night by winning the 400-yard medley relay. The relay team of Senior Kelsey Ferguson, senior Joann Wakefield, sophomore Dani DiMatteo and senior Kaylee Morris finished with a time of 4:07.21, eight seconds in front of the Valpo team.

The relay team of sophomore Steve Fishman, sophomore Brandon Robbins, sophomore Stephen Truchon and freshman Jennings Soccorso-McCoy finished with a time of 3:34.68, four seconds in front of the Valparaiso.

While the first place finishes helped the Panthers get their wins, it also helps them prepare for the House of Champions meet in two weeks.

“I was really excited and we had a lot of energy on deck,” Michalski said. “A lot of our times that we posted really set us up for great positions for House of Champs which is our big mid-season invite.”

Michalski said that everything fell into place on Saturday.

The men and women each had a 1-2-3 finish in one event. The men had Robbins win the men’s 200-yard breaststroke with a time of 2:14.60 with sophomore Matt Jacobs and junior Austin Parrish right behind him in second and third.

The women also had a 1-2-3 finish in the 200-yard backstroke. Freshman Emily Stroud won with a time of 2:16.39 with sophomore Niki Beringer and sophomore Renae Johnson right behind her in second and third.

Michalski said that these two events were a couple of the strongest in the meet because they had the top three finishers.

“Our mentality was to just swim,” Michalski said. “We always swim a lot better when we’re at home, we’re always a little more focused when we’re here. It’s our home pool, we had a lot of energy from the home crowd. Our approach was just put our hand on the wall first and swim smart.”

Fishman won the 200-yard backstroke for the men with a time of 1:55.41, nine seconds faster than the second place Valpo finisher.

Morris continued her streak of wins in the women’s 100-yard backstroke with a time of 53.44 seconds. Freshman Martee Grainger was right behind her in second.

Wakefield also had a first place finish in the women’s 50-yard freestyle with a time of 25.24 seconds. Truchon won the same event for the men with a time of 22.01 seconds.

Ferguson got a first place finish in the women’s 400-yard individual medley with a time of 4:48.19. She also won the women’s 200-yard breaststroke.

Senior Beth Houghton contributed to the 15 first place finishes by winning the women’s 200-yard butterfly with a time of 2:21.71. Freshman Alex Laleian won the same event for the men with a time of 2:01.39.

The night started just like it ended, the men and women both finished the night with a pair of wins in a relay.

The team of Grainger, freshman Lauren Oostman, DiMatteo and Morris got the first place finish with a time of 3:43.39.

Sophomore Bryan McPherson, Truchon, Soccorso-McCoy and Fishman won the event for the men with a time of 3:13.26.

The Panthers will now gear up for the House of Champions meet in two weeks at IUPUI.