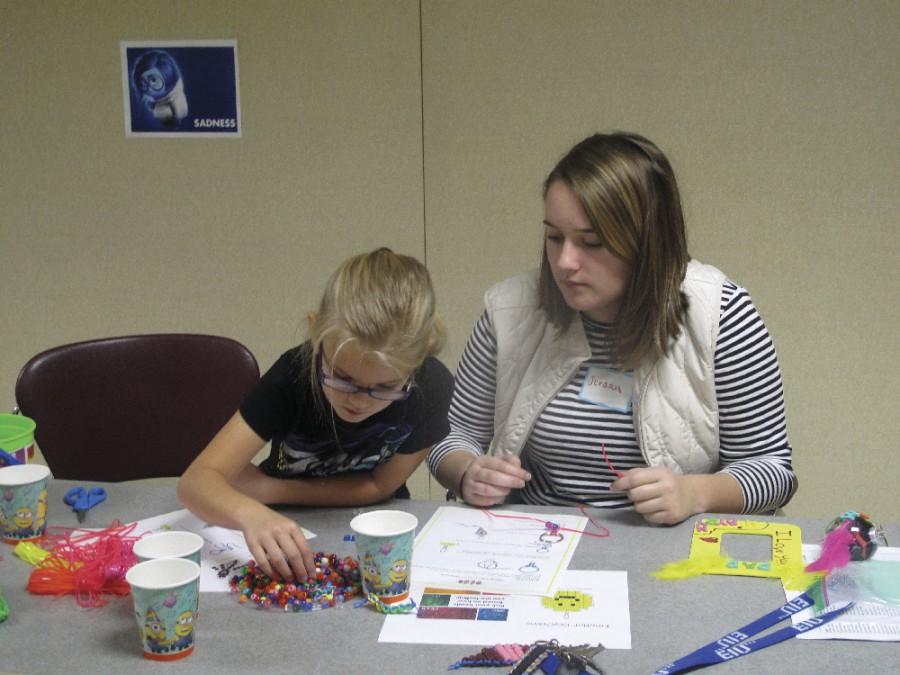 “Kid’s Day Out” happens twice a year, when parents drop their children off at Buzzard. The children are then paired with a volunteer from the Education Scholars organization and taken around to do various activities.

This year’s theme was the movie “Inside Out,” a movie where different emotions, such as anger, joy, fear and disgust, are turned into characters.

Rooms in Buzzard also had different themes from various movies, such as “Friendship Island,” where children were able to color do crafts and play with beads.

Heather Began, a senior elementary education major, was volunteering in the “Friendship Island” room and has been involved with “Kid’s Day Out” since last year.

“I like that it’s a weekend for the parents to have a break, but it also gives the kids a chance to go out and enjoy and have a day for themselves,” Began said. “They’re here for fun.”

Began said it was helpful for her major to be able to interact and talk with kids.

In another room, children made a substance called “Gack” out of water, glue, cornstarch, and optional glitter.

Mari Ann Scoggins, a sophomore early education major, made some with Magnus Scheutz, a 4-year-old who said he liked the glitter.

“This is the coolest stuff ever,” Scoggins said, encouraging Scheutz.

Scheutz also became upset because some of the “Gack” got on his nails, which were painted black.

Cierra Pickard, a junior elementary education major, said it was a lot of fun to play with the kids.

“I think it’s always good to get experience with children, especially since it’s what I want to do,” Pickard said. “I love doing things like this.”

Pickard has wanted to go into education since she was a little kid.

Samantha Reinbold, a junior early childhood education major, said the event was the same every year, just with a different theme.

Reinbold said she kept coming back because she is an education major and she loved being a child’s buddy.

“(I like) being able to be with them all day and seeing them enjoy all these different things,” Reinbold said.

This year, Reinbold helped create the room she was in and design the games, she said it was fun to create games they would like.

Reinbold said participating in Kid’s Day out helped in her major.

“We learned about planning, decorations, what the kids enjoy, how to relate to them better,” Reinbold said.

Two of the children at Saturday’s’ Kid’s Day out were children Reinbold remembered from previous years.

“The one girl, when she first came, she was only a year old so she doesn’t remember me,” Reinbold said. “But now she’s three, so you can see how well she’s grown. It makes me definitely want to come back.”

Tatyana Sheppard, a junior elementary education major, said seeing all of the kids have fun and enjoying the different activities they set up was one of her favorite aspects of “Kid’s Day Out.”

“We all worked really hard, and seeing them be happy makes you happy,” Sheppard said.

Bower said more people came in the spring because the weather was nicer.

An executive board picks the theme, and “Inside Out” was chosen because it was current.

Bower said he always hears from parents and their kids about how much they liked the event.

“Most of the kids come back semester after semester, and we get emails from parents thanking the (students) for the time,” Bower said. “The kids love it, the parents get a chance to get things done.”