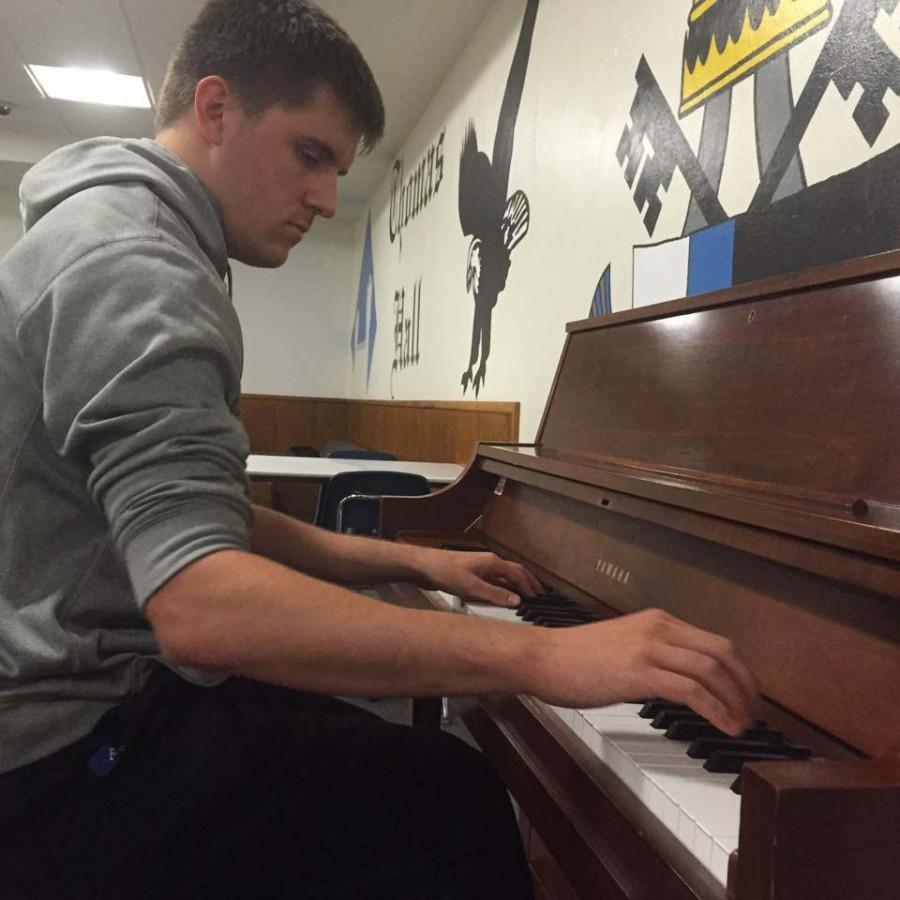 A quiet place with a piano excluded from others is where Mike Rosenbaum, senior history major with a teaching certificate, feels most at home on campus.

From kindergarten until now Rosenbaum played the piano in school performances, in his home church and with his family but playing during personal prayer time is his favorite.

Even with no one around Rosenbaum understands that he has an audience of one.

“I play for my own enjoyment but if I play Christian music it definitely glorifies God,” Rosenbaum said.

The stresses of school take a toll on a student’s physical, emotional and intellectual health but Rosenbaum uses the piano to help him relax and reflect.

“We’re in college, we all deal with stress, so its therapeutic,” Rosenbaum said. “So If I have a small window then I will go to Doudna practice rooms and play until I have to go.”

Physically playing helps Rosenbaum not think about any assignments, meetings or obligations instead he lets the lyrics of the songs flood his heart, especially in “Help Me Find It,” by Sidewalk Prophets.

“The lyrics to the songs I play are good reminders,” Rosenbaum said. “ The Sidewalk Prophets’ verses tells us to be patient and He will do what He has to do.”

Rosenbaum was raised in a Methodist church so he is familiar with Jesus Christ and HIs presence but being so young Rosenbaum did not really value it.

Maturity and his piano helped Rosenbaum solidify his relationship with Jesus Christ.

“When I was younger I didn’t take it seriously but when I transferred to Eastern it gave me that opportunity because Lord knows I needed it,” Rosenbaum said.

The numerous songs Rosenbaum learned and played “10,000 Reasons” by Matt Redman stands out the most.

Throughout the years I’ve never forgotten because I definitely have an emotional attachment to that song. When I started taking my faith seriously that was the song that always reminds me of it, Rosenbaum said.

“Getting close with God has built the characteristics he already had and made them stronger,” Emrick said.

Friends for a year, Emrick describes Rosenbaum character as kind, respectful and courteous.

“That’s just who Mike is, raised great, always kind to people and always willing to do for others,” Emrick said.

Rosenbaum was apart Christian Campus House for about year but now is a member of the Newman Catholic Center.

“He is actively involved in the Newman center,” Emrick said. “ He volunteers occasionally, tutors and every week the pastor gets a group and they eat pizza and talk.”

Even though Rosenbaum did not grow up in a Catholic church Rosenbaum was open to learn about a different religion.

“It’s important all Christians try to understand each other if we are going to get along,” Rosenbaum said. “It’s all about furthering the kingdom of God.”

Growing up around music helped Rosenbaum develop his own love for it.

“Both my parents are musicians: my mom plays the flute and piano, my dad plays the violin and viola and my younger brother plays the piano. So I did not have much of a choice,” Rosenbaum said.

Music has not only built his spiritual walk but also help strengthen his relationship with mother.

His mother knowing how to play the piano gives them another avenue where they can relate to each other and another way to communicate with each other.

“When my parents divorced we moved to Illinois and my mom became my private piano instructor and she is way better than I am,” Rosenbaum said.

As well as being his piano instructor, his choir director and his mother, she has served as three influential roles in his life.

Besides gospel Rosenbaum enjoys playing pop and country music and uses the learning method of sight-reading for each song.

“When I heard it before and If I like the song its easy because the chords fall together and I can site play the melody,” Rosenbaum said.

However, even mastering a method it is still a skill that has to be practiced constantly and even with years of experience there will always be areas to improve.

At the age of two or 52 a person can learn how to play the piano.

“Just because you don’t get it the first time doesn’t mean you are in capable of it because all instruments take time,” Rosenbaum said. “There is nothing really stopping you just start simple and work your way up.”