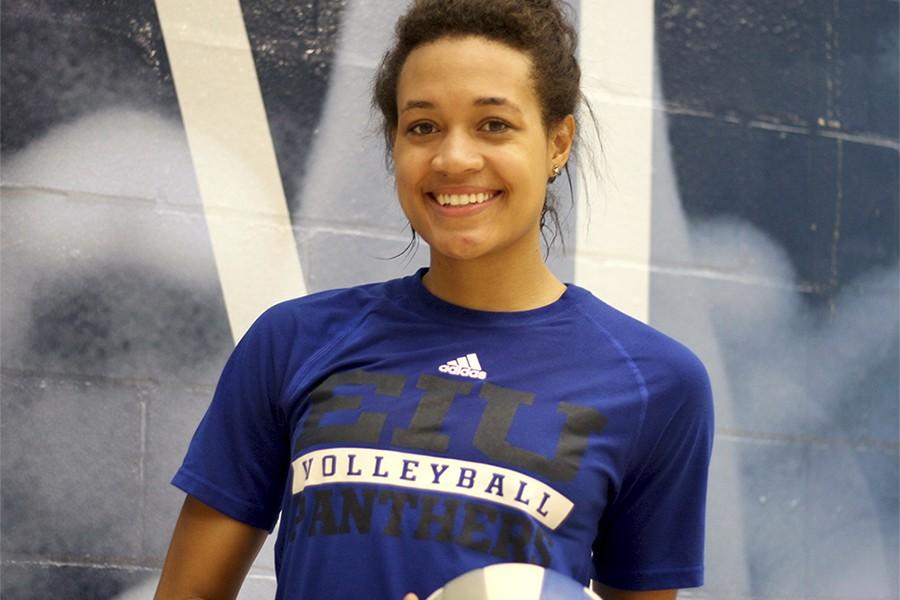 Senior Chelsea Lee has earned 251 kills this season. Lee has been in double digit kills in six out of the last seven Ohio Valley Conference matches.

Senior outside hitter Chelsea Lee said she is proud of the consistency Eastern volleyball team has shown in her last year at Eastern.

“The past few weeks have been OK, on my part.” Lee said. “The team has played amazing and I am really proud of how we’re doing.”

Lee has been playing volleyball from a young age when her friend invited her to play on a club team with her and has loved it ever since, she said.

So far this season Lee has recorded 251 kills. In the recent matches against Southeast Missouri and UT Martin Lee has recorded 15 kills in each after only getting six in three sets played in a win against Murray State Oct. 24.

Lee has also recorded 23 assisted blocks and 5 solo blocks so far on the season.

Coach Sam Wolinski said that Lee has been consistent in the latter part of the season.

“The latter part of the season she’s really been consistent,” Wolinski said. “She’s been a go to on the outside for us. I think the Murray match was just an off match for her quite honestly.”

“My strengths are in my energy. I get really excited to win and competitive,” Lee said. “The energy I bring to the team helps keep everyone energized throughout the whole game and it pushes us to win.”

Lee said it has been a goal of hers since her freshman year to stay consistent and remain a force up front for the Panthers.

The Panthers will be playing the Ohio Valley Conference tournament Nov. 18 and Lee said that it is hers and the team’s goal to win it this year.

Lee said her and the rest of the Panthers work hard in the off-season to make sure they are in shape to play at a top level.

“In the off-season we work on strength and conditioning.” Lee said. “Lots of running and lifting.”

The spring season is a time for getting stronger and faster to focus on fitness for the Panthers.

“Basically in the spring season you’re the strongest you’ve ever been, the fastest and the quickest.” Lee said. “They train us so hard but we are in amazing shape.”

Lee knows her role on the court and she plays for the benefit of her team’s success.

“I love the fact that I get to score.” Lee said. “I love to be aggressive and go hard on the ball and on the other team.”

Whether Lee is on the court or on the bench, Wolinski said she plays a big role in the team’s success.

“The great thing about Chels (Lee) is that she might not be in the match but she’s out there cheering her team on and wants us to win,” Wolinski said.

When the Panthers took on SEMO last weekend, Lee had to face a little adversity but came out strong the next day against UT-Martin to help the Panthers get the win and get everybody going.

The Panthers will travel to Eastern Kentucky and Morehead State this weekend and Wolinski said she hopes that the great week of practice that she has had will carry over to the matches this weekend.