Rolling through history in style 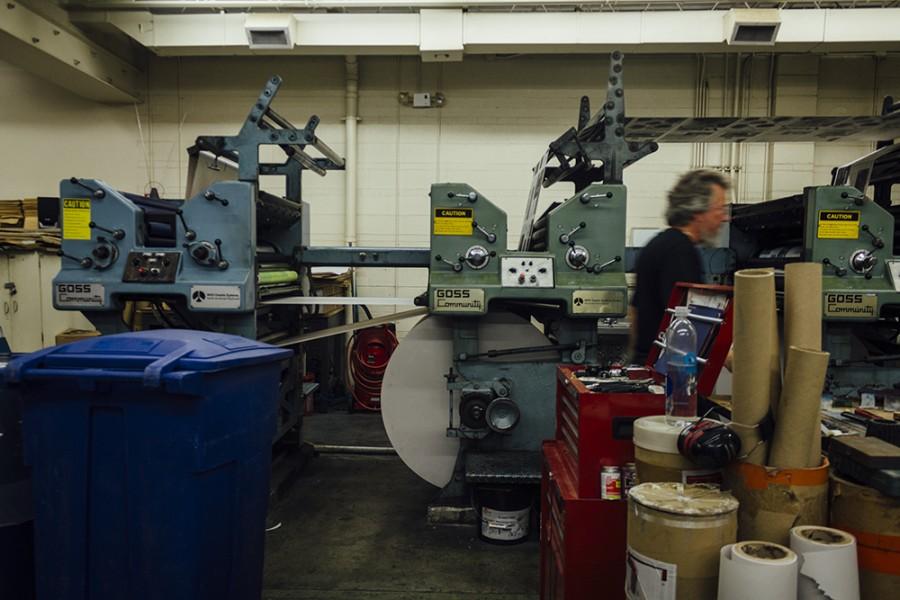 The smell of ink wafts out from the pressroom in Buzzard Hall, while across the hall, the staff of The Daily Eastern News puts the finishing touches on the next day’s edition.

Negatives of the pages are being printed and cut while pressman Tom Roberts prepares the press for another night of printing The News.

The printing press has been part of the news process since 1976 when John David Reed, a retired journalism professor, journalism department chair, director of student publications and adviser to The News, spearheaded the effort to buy the press units.

The press was purchased after The News began producing a daily paper in 1973.

Reed ran numbers and found that Eastern could print its own papers for the same amount of money it was paying to have them printed elsewhere.

“We could buy a press and all the ink and paper, and we could hire a pressman, pay some student workers, create jobs for student workers,” Reed said. “We could do all that for about the same amount of money we were paying those guys.”

Reed said students who worked for the newspaper would be able to work directly with the press and get to know that part of the operation.

“Our students would graduate and go work for newspapers and their editors would say ‘Geez, where do you find kids like this? Why do you know so much about the press?’” Reed said.

The press is a large piece of machinery that is not easy to move, but it has not sat in Buzzard Hall during its entire time at Eastern.

Roberts said Dan Thornburgh, the founder of Eastern’s journalism department, and Reed both negotiated for the press to be moved to Buzzard Hall in 1981-82, when all of student publications was moved into a gymnasium in Buzzard Hall.

When Buzzard Hall underwent a two-year renovation beginning in the fall of 1995, the press had to stay put.

“When they were redoing
Buzzard, they did all that re-doing around the press,” Reed said. “We could not disassemble the press and move it somewhere else, and then disassemble it from there and reassemble again in another location.”

The printing press now sits in the pressroom across the hall from the newsroom where The News and the Warbler yearbook are located.

Reed and Roberts both said they believe Eastern is one of a small number of schools in the nation with student publications owning their own printing press.

“There are only 12 college newspapers in the United States with their own press,” Reed said. “Only about half a dozen actually had the paper themselves and the student publications organization owned the press.”

The process of printing an edition of the paper has come a long way since the days when Eastern’s paper was printed off campus.

The first kind of printing that was available to publications was the letterpress printing process. The person working the press would have to individually place letters on a composing stick before transferring them to a larger print block.

“This was one letter at a time; that’s how newspapers got put together, which is one reason newspapers are generally pretty small,” Reed said.

Reed said it took a lot of physical labor to put the type together, and after the type was placed it would be put on a “chase” before the ink was rolled onto it and another roller compressed paper on the type, leaving an impression.

Huge, metal machines called linotype machines were invented to help the process go by quicker. These machines had 90 keys on a keyboard and used molten lead.

When the typesetter would sit at the machine, he would test it to make sure the machine was running by running his fingers down the left side of the keyboard.

The machines made one line of type, and those lines had to be placed in a tray.

A thick piece of fiber paper would be laid over the tray and a roller would put pressure on the type, making an impression on the paper. The impression would be upside down  and would go through another machine to make a lead impression.

The lead forms would then be placed on the press.

Letterpress printing began to be phased out in the 1960s when offset printing became more available.

Reed said in offset printing, a negative is made of the pages, and those negatives are placed on top of a metal plate. A bright light is used to transfer the image to the plate backward so when the plates are put on the press and ink is applied, the image is printed the correct way on paper.

“That was a wonderful innovation because it meant that we didn’t have linotype machines and hot lead,” Reed said. “People who ran linotype machines sometimes had burns on their hands because the hot lead would squirt out sometimes.”

Reed said when The News started, all of the layout happened in a composing room. The composing room staff put the pages together following the layouts on paper dummies prepared by the copy desk. Stories were run out in long strips of photographic paper that had to be trimmed and waxed and then positioned on the page by hand.

Eventually, technology developed and The News moved to desktop publishing. Students now design pages on the computer desktops in the newsroom and the pages are sent to an Imagesetter that prints them in negative form.

The negative is cut and placed on top of a flexible metal plate, and the image is burned into the plate. The plate is then washed, dried and ready for the pressman to attach to the press.

Pete Zucco was hired as Eastern’s first pressman from 1976 until the summer of 1978.

Larry Kuykendall took over for a semester, and in January 1979, Eastern graduate Mark Turk took over until 1982.

Johnny Bough succeeded Turk in 1982 and worked as pressman until he retired in 2004. Roberts has been the pressman since.

Reed said one of the great things about Bough and Turk is that they wanted to teach the pressmen who followed them that running the press is only part of their job; the pressmen also have to teach students.

“We hope that all of our people who are in charge are remembering that their first job is always education,” Reed said. “(Helping) a student learn how to get better work habits or get along with people better or how to solve all the many problems college students have to face when trying to get through all the stuff they do.”

Reed said he ran the press two times while he was at Eastern when a pressman was not available to work the night shift.

“The pressman had a student helper that knew enough about the technicality about how to run the press, and I had the brass to say ‘turn it on!’ and we ran the dang press,” Reed said.

Reed said one night when he was working he and the student worker did not lock the plates in correctly, and the plates were thrown off the press.

“If you don’t get them locked in properly and you start running the press, those plates make a hell of a noise that scares you to death,” Reed said. “We threw a bunch of plates that night because we didn’t have it figured out. We didn’t have the folding of the edges figured out to get it to fit, but we eventually figured it out.”

Reed said it takes more than one person to produce a paper because everybody has to pitch in to help get the job done.