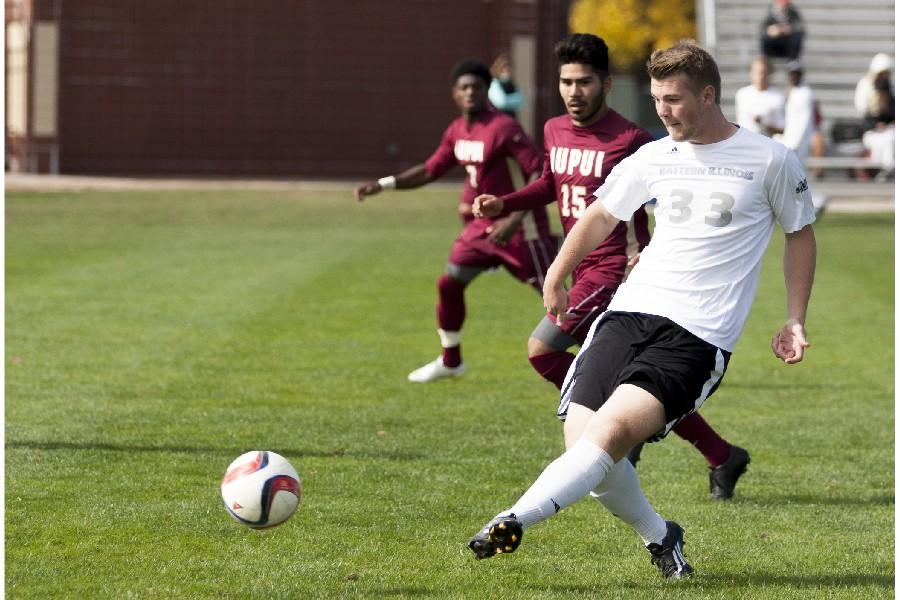 Freshman midfielder Brendan McDonough has started 12 out of 15 games in his first year. He has recorded 4 shots in 15 games. As a freshman he has earned 11 straight starts and is one of seven players to appear in all 15 games so far.

Freshman midfielder Brendan McDonough has gradually earned more playing time as this soccer season has gone on and said he is looking to make an impact for the men’s team for years to come.

The newcomer has started 12 out of the 15 games the team has played so far this season. His first start came in the third game of the season in a loss on the road against Pittsburgh.

McDonough only played soccer his freshman year at St. Dominic High School in Missouri before he went on to play his sophomore through senior seasons for the U.S. Soccer Development Academy (USSDA).

He has had to make many transitions from playing at the Development Academy to college soccer.

“I would say the main transition that I had to make for Development Academy soccer to college soccer is the size and pace,” McDonough said. ”I had to go from playing against guys my own age to playing guys that are in some cases even five years older than me. Also the speed of play was a little bit of a transition, the college game is very high paced at times.”

Playing at a higher level before college has helped McDonough make strides to get on the field more, he said.

“I was used to playing at a high level, so when I made the transition to college I really didn’t feel out of place,” he said. “Another contributing factor could also be my work ethic. Everyday at training I put in the work in order to improve my game.”

McDonough considers his biggest accomplishment being able to play Division 1 soccer. Another thing he is proud of is that he was ranked as the 44th best forward in the nation, and fifth best in the heartland region prior to coming to Eastern. These rankings are according to TopDrawer soccer.

Balancing academics and being from out of state has not given him many challenges due to playing the game for the majority of his life, he said.

“I became used to the rigorous schedule of a student athlete during my high school and academy days, and I learned early on the importance of balancing academics and soccer as I traveled around the country and even the world playing the beautiful game,” McDonough said.

The freshman had a career high three shots against conference opponent Oral Roberts this season, and has played the full 90 minutes of six games.

Sophomore Dominic Recca was a part of the recruiting that got McDonough to come to Eastern. McDonough said Recca is someone on the team that he looks up to.

“We went to the same high school so we both played on varsity my freshman year and I always looked up to him,” he said. “As long as I have known him he has been an incredible soccer player that I have admired”

Once Recca got him to come visit Eastern, he decided that he wanted to help contribute to this team.

“Everyone I met was very nice and inviting,” he said. “It just kind of felt like home. I also liked the idea of being a part of building a winning program, and I knew I would be able to use my abilities to help do this at EIU.”

The three wins by Eastern are McDonough’s favorite memories this season because they took a team effort that he will remember forever.

He will be playing in his last game as a freshman this Sunday against Summit League opponent Omaha.