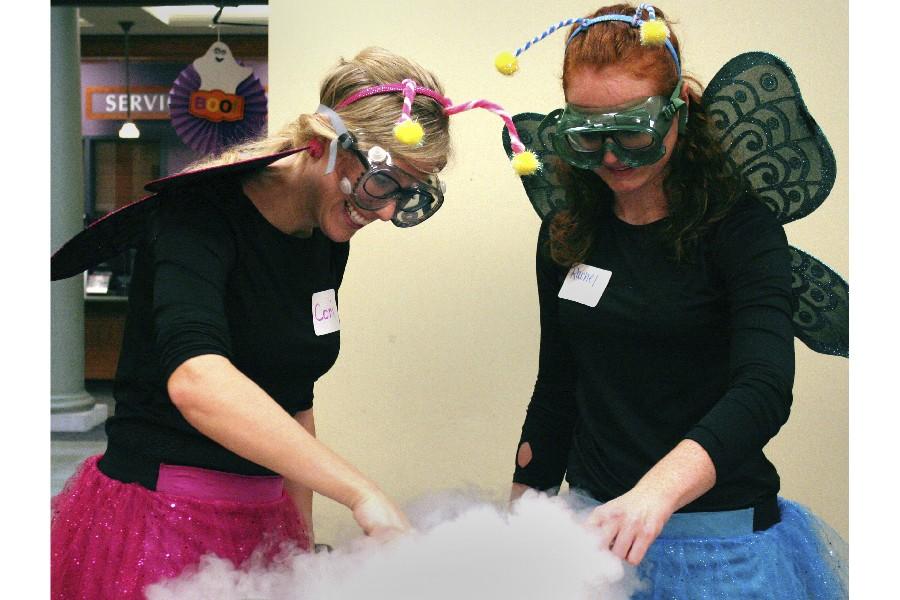 About 10 girls wearing goggles, aprons and gloves gathered around a round table to watch smoke pour out of a large metal bowl while an Eastern student volunteer used liquid nitrogen to make ice cream.

These fifth and seventh-grade-girls did this and other activities, during the first “Chemistry Colors Halloween” hosted by the EIU Women Chemists Committee in Rotary Room B of the Charleston Carnegie Public Library on Saturday.

Rebecca Peebles, the event coordinator and chemistry professor, said the WCC’s goal in creating the event was to spark scientific interest in adolescent girls.

“It’s been shown over and over that little girls think science is cool and fun and interesting, but as they get older they get less interested and then they start to think that it’s too hard or it’s for boys or it’s too geeky,” Peebles said. “We want to get them interested at an age where they’re starting to grow up, so they can be interested in it in high school and so on.”

Peebles wore a shirt with the chemical structure of sugar made out of candy on it and said the event was successful in engaging these young females. She also said it was exciting to watch their fascination in science.

“It was a lot of fun seeing the girls getting into the activities and asking questions about how things work and why things work the way they do,” Peebles said. “It’s also really cool that they made connections to other things in their lives.”

In light of the event’s success, Peebles said not only would they strongly consider doing it again next year, but they also might expand it to include boys and possibly a broader age range.

Hannah Stroud, a fifth-grader at Williams Elementary School in Mattoon, said she would definitely attend this event next year because she said it was not only educational, but also fun.

“It made me think that chemistry is even cooler because of all the stuff that you can make and do with it,” said Stroud.

Stroud also said she appreciated the volunteers’ patience as well as their teaching methods because she said they made it easier to understand the scientific reason behind each activity.

Rachel Dorris, a senior chemistry major, was among these volunteers; she said showing these girls fun ways to apply science was rewarding.

“It’s important for (girls) to realize that they can be a chemist or a scientist or whatever they want to be,” Dorris said.

Dorris, and other volunteers, illustrated this importance by helping the girls make slime, ice cream, glow sticks and pumpkin clocks.

The WCC as well as Eastern’s chemistry department and the East Central Illinois Section of the American Chemical Society planned these activities, said Peebles.

“It was a group effort,” Peebles said. “The American Chemical Society Student Affiliates provided a bunch of students in addition to the faculty and students who were originally involved in the planning.”